NYT: Stop it, you are embarrassing yourselves. 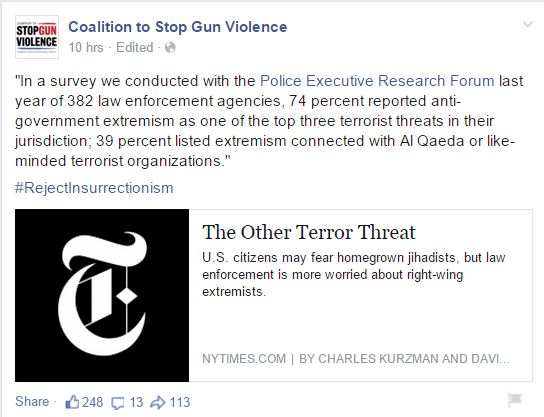 In a survey we conducted with the Police Executive Research Forum last year of 382 law enforcement agencies, 74 percent reported anti-government extremism as one of the top three terrorist threats in their jurisdiction; 39 percent listed extremism connected with Al Qaeda or like-minded terrorist organizations. And only 3 percent identified the threat from Muslim extremists as severe, compared with 7 percent for anti-government and other forms of extremism.

Source: The Other Terror Threat – NYTimes.com

Wow! It has to be real bad when 282 of the 12,000 law enforcement agencies in the US consider anti gun extremism the top terrorist threat. They should have hard numbers on that, right?

“The threat is real,” says the handout from one training program sponsored by the Department of Justice. Since 2000, the handout notes, 25 law enforcement officers have been killed by right-wing extremists, who share a “fear that government will confiscate firearms” and a “belief in the approaching collapse of government and the economy.”

Since 9/11, an average of nine American Muslims per year have been involved in an average of six terrorism-related plots against targets in the United States. Most were disrupted, but the 20 plots that were carried out accounted for 50 fatalities over the past 13 and a half years.

In contrast, right-wing extremists averaged 337 attacks per year in the decade after 9/11, causing a total of 254 fatalities, according to a study by Perliger, a professor at the United States Military Academy’s Combating Terrorism Center. The toll has increased since the study was released in 2012.

Now, notice that they do the “moving the goalpost” by starting LEO deaths by RW Extremist in 2000 to achieve a count of 25 deaths and then fail to mention any LEO deaths by Islamic terrorism because that would mean to include the 60 deaths in 9/11 at the WTC. The National Law Enforcement Memorial Fund has for the decade of 2005 to 2015 a total of 414 LEO deaths in car crashes and 68 motorcycle accidents for a total of 482 deaths by vehicular accident. You do the math.

It is not till the very bottom of the article that they happen to mention:

Meanwhile, terrorism of all forms has accounted for a tiny proportion of violence in America. There have been more than 215,000 murders in the United States since 9/11. For every person killed by Muslim extremists, there have been 4,300 homicides from other threats.

So basically, this HUGE AND VERY REAL TERRORISTIC THREAT ZOMG RIGHT WING KILLERS! is responsible for 0.11% of the murders for the decade after 9/11 and I am willing to be that is lower than the error rate for the whole FBI UCR Statistics for Murder/Manslaughter for the same period.

My guess is that the New York Times and Taco Stand has started with the 2016 Democrat Primaries and Gun Control is always a good way to get the base going.

4 thoughts on “NYT: Stop it, you are embarrassing yourselves.”