History is enlightening. As much as we want to portray ourselves better than those who came before us,  the sad truth is by far, very little has changed in the human heart, be it goodness or depravity.  History also teaches us that there are consequences for stupid actions and you as elected official and chief law enforcement of a state, should not abuse your power.

In 1892 the State of South Carolina instituted the Dispensary system for liquor under pressure of Governor Benjamin Tillman. It was simply a monopoly on the sale of booze by the state and sold as a compromise between those who wanted absolute Prohibition (Ban all the alcohols! Does it sound familiar) and the People who just wanted to have his hooch at home, bought where it was the cheapest and  unimpeded by government.

As a good government monopoly, it was not fond of the idea that the good citizens of the State would ignore the law and it created a liquor constabulary which was in charge of enforcing the law and what eventually led to a wee bit of problem: Make sure people had only the authorized booze at home and do what needs to be done in those cases.   Soon enough they were no longer constables but renamed Spies and on the month of April 1894, the people of Darlington had enough of that crap, bad blood finally came to the surface, shots were fired, citizens died  and they chased the Spies at gunpoint out of their town and into the woods. 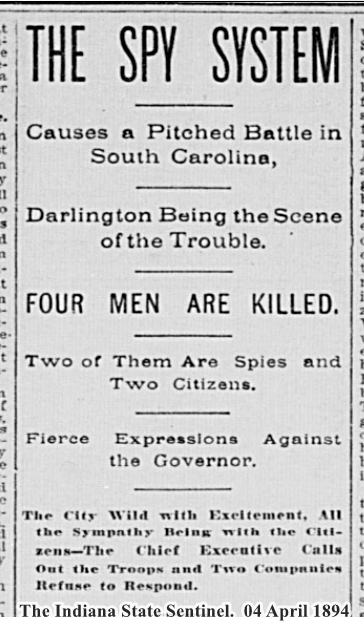 The bottom part of the picture is telling: Governor Tillman called the State Militia (This is before the Dick Act so not yet National Guard as we know today) and the State Militia refused. Not only refused, but they disbanded and threatened to leave the doors of their armories open so people come and take the guns.

Eventually calm returned, the dispensary system remained but it was not effective and it also became (what a surprise) a den of corruption.  In 1907 the system closed at state level but counties were given the choice to keep it.  In 1915 a state referendum voted for Prohibition and we know the rest of that story.

Here is a PDF of the newspaper page of that screen capture. It has more details of the event if you wish to read it.