We here at Gun Free Zone have covered the rise and partial fall of David Hogg as an activist after the Parkland Shooting.

There was another Parkland student who also gained notoriety for his activism, and his name is Kyle Kashuv.  Kashuv was in many ways a foil to Hogg.

Kashuv was pro-Second Amendment, advocating for other means of trying to stop gun violence than gun bans.  He spoke at the NRA.  He was a frequent guest of conservative media outlets.

His activism was somewhat more successful than Hogg’s as well.  He championed The Stop School Violence Act which earned bipartisan support.  He also helped develop an app to report potential school shooters.

Unlike Hogg, Kashuv’s pro-gun conservatism made him a target for the Left to destroy.

Long before the Parkland shooting, Kashuv was part of a group of kids that shared a Google doc where they would say horrible, sometimes racist, shit to each other for shock value.

Why?  Because teenage boys are stupid and do shit like that.  Have you ever been in a men’s room and read what has been written on the walls of a stall?

Those Google docs were then leaked online and sent to Harvard.  Lefty Twitter demanded that Harvard punish Kashuv.

Harvard demanded that that Kashuv participate in a struggle session.  Which he did, in full, on Twitter (go read it here, I have unrolled it).  That included a letter to Harvard. 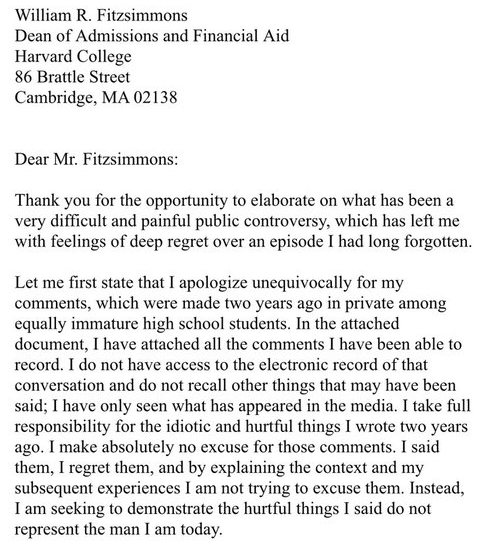 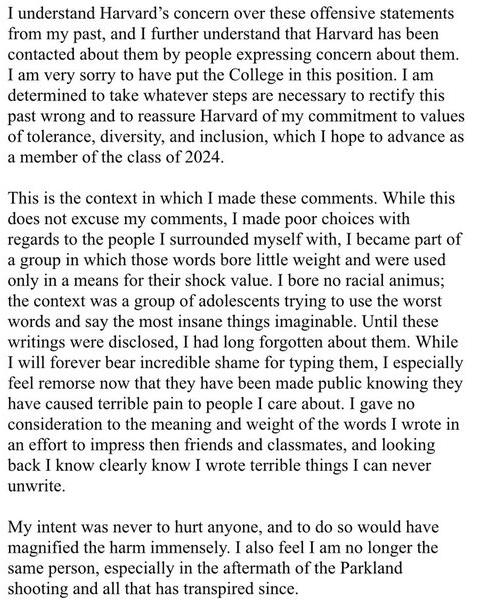 Harvard rescinded his acceptance in a very ugly way. 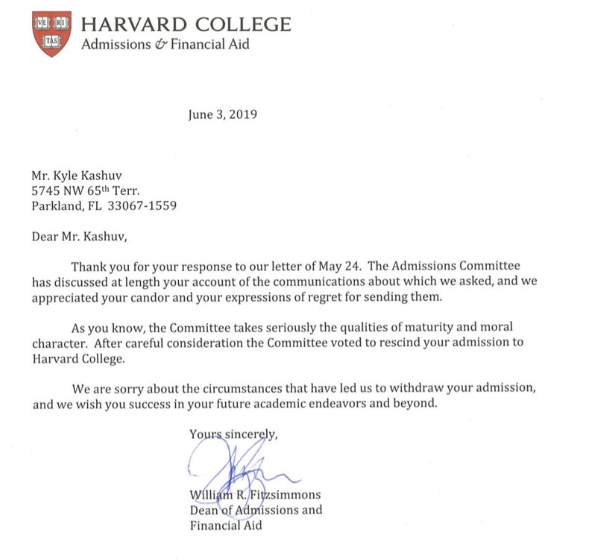 First, Harvard says that what Kashuv did as a stupid teenager before the shooting shows a lack of moral character.  However, Hogg’s continued hateful attack on law-abiding citizens, gun owners, NRA members, and Conservatives is not a lack of moral character.  It’s alright by Harvard standards to curse out Republican politicians on TV, advocate for campaign finance violations in Canada, and say the good people are child killers with blood on their faces.

Second, what reputable university will now accept Kashuv now that Harvard has rescinded his acceptance for moral character?

What high caliber school will go out on a limb and accept him over the inevitable protests of other woke students and Leftist activists?

This young man’s future may have been ruined because he acted like a typical stupid teenage boy with other stupid teenage boy friends in private, and the internet hate mob dug through his life looking for something to weaponize against him.

Remember that he committed no crimes and there are no reports that he ever lashed out maliciously at others like this, only that he said stupid things on a group chat just to get a rise out of other people.

If you want to make the truth about this and clearer, just look at how Buzzfeed and AOL News headlined this story.

Why even bother giving him a name.  He’s the pro-gun one and that justifies a lack of understanding, empathy, and forgiveness.

If you go to Kashuv’s Twitter thread on this just start reading through how many people are overjoyed at this young man’s destruction.  How he is so privileged and how much pleasure they take in seeing him brought down.

There will be no curiosity, no enjoyment of the process of life. All competing pleasures will be destroyed. But always — do not forget this, Winston — always there will be the intoxication of power, constantly increasing and constantly growing subtler. Always, at every moment, there will be the thrill of victory, the sensation of trampling on an enemy who is helpless. If you want a picture of the future, imagine a boot stamping on a human face — forever.

Harvard made its decision and there is nothing Kashuv can do.  Social Justice Twitter is celebrating, intoxicated, in the thrill of victory of what they did to this young man and ruining his future.

This is a sad and grotesque shame.