Parkland Kid Cameron Kasky finally admits he is not a victim nor a survivor.

J. Kb. warned me  about his tweets. 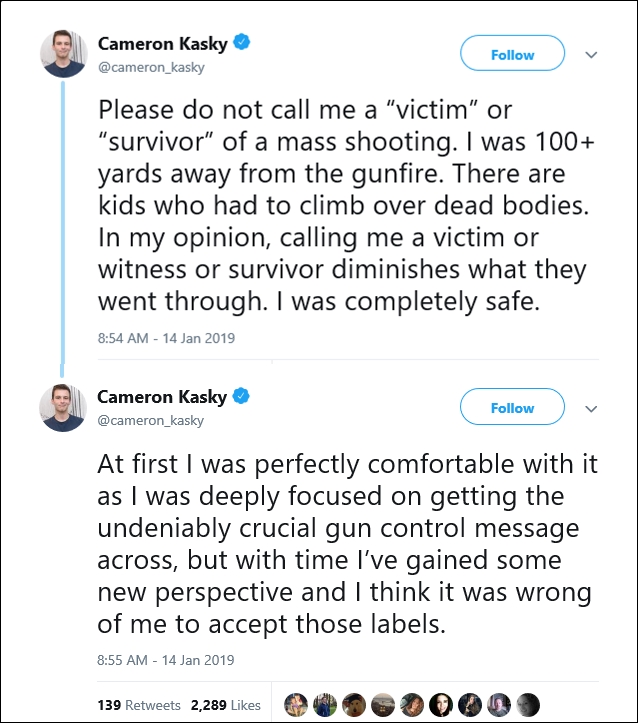 I have been pounding on the theme of “survivors” since I read about Emma Gonzalez saying she was in the auditorium when the shooting at Marjory Stoneman Douglas High School began.  I also believe David Hogg was not in Building 12 but probably in Building 7 when Nikolas Cruz began his killing spree. and as much as I have tried, I can’t find a firm reference where was he hiding.  You’d figure if he was in Building 12 where the shooting occurred, he’d blast it high and wide, right?

It is the second tweet that is illustrative: He was comfortable with the label.  The label gave him gravitas, gave him importance and access to the media to push for gun control. And long as the Parkland Kids were the ben and Jerry flavor of the Liberal Month, they could do or say whatever and they were untouchable. He was a hero for Gun Control, he was famous, probably got laid and surely got swag, why would he relinquish the cape?

Alas, all good times come to pass in the Gun Control PR boat. The once celebrities that had all doors open, sudden realized that they come with an expiration date and they are about to cross it.  In the Parkland Kid’s case, they are already a couple of months or more pass the time they were tossed into the political compost bin.

Two years ago, I would say he realized the mistake he made and was trying to apologize and make amends. Unfortunately my reservoir labeled “Benefit of the Doubt” not only is empty but now holds a colony of meerkats. I believe somebody came to him, tired of his crap and told him straight and without decorations that being somewhere in the same zip code when the massacre occurred did not make him a victim.   Not being scandal proof nor covered in Media Teflon anymore, decided to cut his loses and sort of admit a little bit of wrongdoing.

Cameron Kasky climbed over the bodies of his fellow students long after the shooting was over and used them to prop himself high while waving the “gun safety” banner. That should be his only claim to fame.

He improved over the traditional tap-dancing on blood of the victims, I give him that.

One thought on “Parkland Kid Cameron Kasky finally admits he is not a victim nor a survivor.”