I saw this story on Fox News which was originally posted on Campus Reform.

A journalism professor at the University of Georgia apologized for offending people after calling the Republican candidate for governor a “nice guy” on Twitter.

Charles Davis, dean of the Grady College of Journalism and Mass Communication at UGA, tweeted-then-deleted a message about the President Trump-endorsed candidate for Georgia governor, Brian Kemp, on the night he won the Republican primary.

“I went to high school with GOP guv candidate @BrianKempGA,” Davis wrote in the now-deleted tweet. “We played YMCA ball from childhood. Politics be damned. He is a nice guy, always was. Kind to a fault. He’s a friend, always has been, and will be when we’re old(er) and grey(er). That’s how all this should work, people.”

So a professor and dean at the University of Georgia said a nice thing about a friend and the Lefty Twitter hate mob decided they needed to destroy him over it.

Many of the Tweets were typical SJW garbage.  The evil Republican was somehow a threat to their safety because feelings. 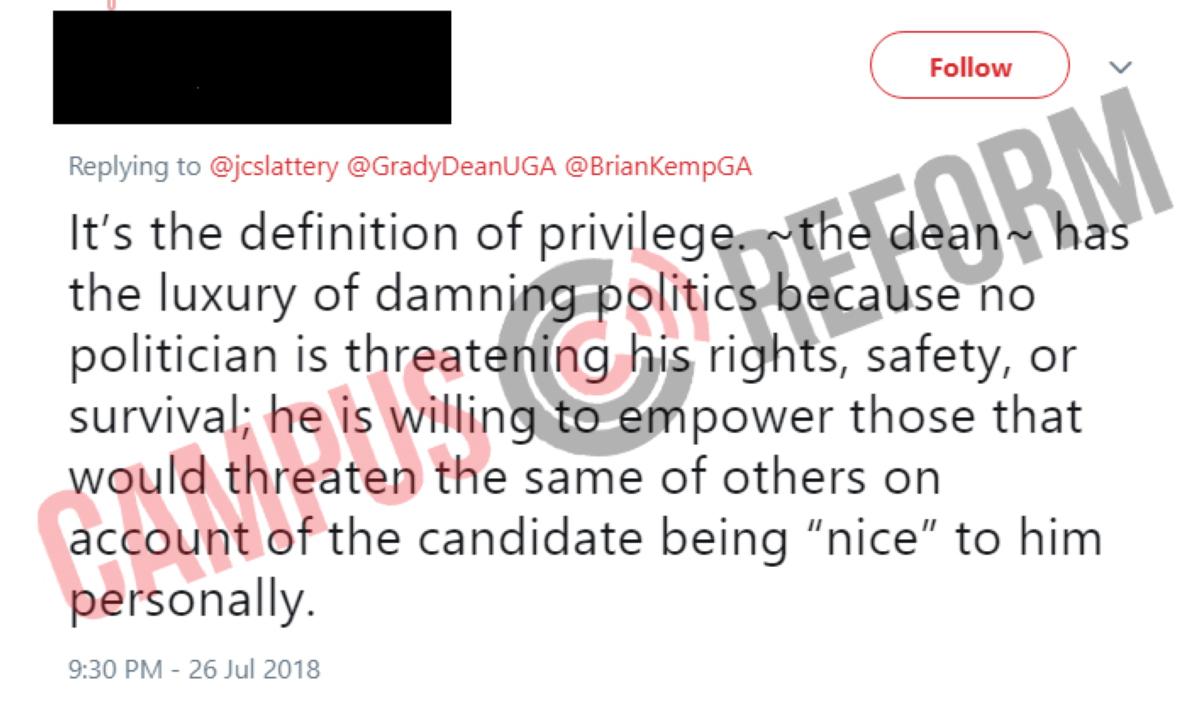 They know they will never be really hurt by Republicans, but by claiming they will be they feel they have justified the use of whatever tactic they want.  Be honest, if as many people actually died from policy as the Dems claim, Trump would have outclassed Stalin by now, but of course he hasn’t. 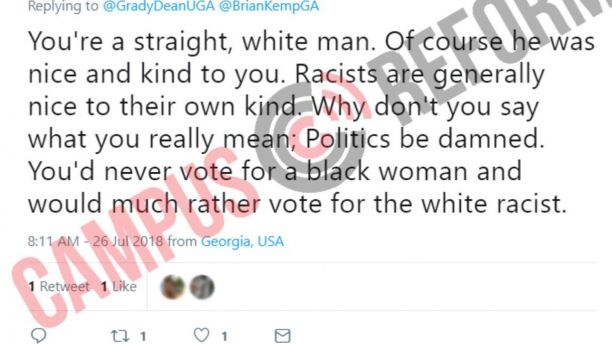 This is the black woman he is referring to.

Dem candidate in massive personal debt and unpaid taxes, wants to be governor of Georgia; cites prejudice for financial woes

Stacey Abrams is vowing to improve Georgia’s economic standing, but she believes her struggles with massive personal debt do not reflect poorly on her fiscal responsibility.

I’d say so.  If you have crap credit they won’t let you buy a car.  Why should she get to run the budget of an entire state?

Georgia’s Democratic gubernatorial nominee, Stacey Abrams, ended her three-day “Jobs for Georgia” tour Saturday with a stop in the small town of Macon. During a town hall, she offered a few examples of her ambitious economic agenda.

Among many ideas, she told local voters she hopes to create a $10 million investment fund to boost small businesses and another $40 million fund to spur job growth. Abrams also proposed converting abandoned warehouses in the area into advanced hubs for solar panel installations.

Hooray!!!  A massively expensive but totally useless green energy project.  I can’t want for this to go all Solyndra on her.

Abrams claims such investment is necessary to improve job growth in Georgia. However, her critics argue she supports expensive, big government solutions.

More notably, Abrams has taken flak for her massive accumulation of personal debt.  The former state representative has acknowledged that she owes more than $200,000 in student loans, credit card debt and IRS back taxes.

I did not understand that those magical slivers of plastic that I was getting in in college, a $100 purchase was going to cost me like $3,000 over the next seven years,” Abrams statedin an interview with Yahoo Finance. “And that if I didn’t pay the bill every month it was going on some report that was going to follow me even after I had a great job.”

JESUS!!!  That is the single most disqualifying statement I can think of for someone who is going to manage a budget.

“I don’t know how money or debt works, let me be responsible for the state coffers” is not a message a lot of people can get behind.

How does this woman do anything let alone run a campaign?

Abrams, the former minority leader of the Georgia House of Representatives, has blamed a misunderstanding in her younger years of how credit card debt works and a temptation as a business owner to spend revenue instead of withholding it for tax collection. She has also cited family obligations as a major reason for debt, having helped pay for her father’s cancer treatment.

She shouldn’t be giving anybody business advice.

Abrams has argued that her financial difficulties make her uniquely qualified to lead Georgia, pointing out that many Americans also struggle with debt. However, her case does appear to be well above the norm. Her $96, 512 in student loan debt is almost three timesthe national average. More notably, her $77,522 in credit card debt is five times the national household average.

For a Democrat, that much debt is a unique qualifier.  It shows just how good she is at spending money she doesn’t have.  Obama was praised up and down for taking us past $20 Trillion in debt.  With her personal record, she can bankrupt Georgia twice.

Abrams — who would become the first black female governor in the country if elected — also appeared to cite prejudice for her financial woes. Defending her weak financial standing in an op-ed for Fortune, the gubernatorial candidate blamed wealth disparities between white, Latin and black households as partially the result of housing, labor and education discrimination. Despite landing a $95,000 salary position soon after graduating from Yale Law school, Abrams also lamented in her column over the gender pay between women and men.

It’s not her fault she “did not understand that those magical slivers of plastic” and owes a couple of hundred thousand dollars, she’s a victim.  There is nothing racism and sexism can’t be blamed for.

So she’s gone from “I don’t understand money” to “I’m just a poor black female victim that you can’t expect financial responsibility from.”  This is supposed to make people vote for her.

This is why that Tweet stuck out in my mind.  Dean Charles Davis is expected to vote for and support this person who owes an unbelievable amount of money and blames everyone else for her problems because she’s a black woman, and if he doesn’t he’s a racist.

“Your candidate spent more money than she’ll ever be able to pay back because she isn’t responsible with debt.  Now she wants to be governor and spend the state’s money like her own – which is to say she’ll blow all of it and more wastefully.  How about, no.”

“You’re a racist and a sexist and you should apologize for your violent words.”

This is the identity politics that is destroying American.