Callaway resident Victoria Smith told the News Herald that thieves came into her townhome while she and her four children were sleeping with the front door open to allow a breeze inside.
“I must’ve been so exhausted from everything in the past days I didn’t even hear them come in,” Smith said. “They just snatched my purse out of my hands and ran. … It was all we had.”

It is only natural that right after a major situation, our need to be aware and in control of things is exacerbated and we simply do not allow ourselves to rest. I pulled something like this back when I was younger and we had a little three-day social dislocation in Venezuela with generalized looting and killing. I survived three days with lots of coffee, cigarettes and the occasional 30 minute lap. The end result was me being a walking zombie on the fourth day and on the fourth day driving into a small military action because I was so asleep, I did not recognize that the lack of traffic meant something was going down rather than the original “Hey! I am lucky, there is nobody out here, the road is all mine!”

I have been blessed with a wife that smart and will take no crap from incoming looters. She understands the idea that we need to work shifts and that asleep must be enforced in more than just catnaps. That is the way it has worked since we moved to Florida and faced being out of power with the forced need to have our house wide open in order to cool off some. Our sleep cycles also help: She is an early night sleeper, I can’t sleep till very late. That means somebody is always awake and making our presence felt which helps dissuade some (not all ) individuals or groups with evil intentions in their hearts.

As for the “infamous” You Loot-We Shoot signs: 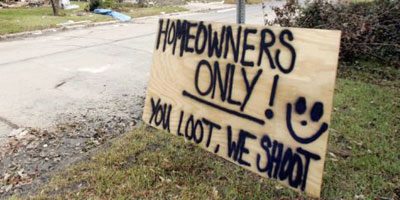 I agree with their use but ONLY if you have the means and the will to enforce the message. Do not think they are some magic wand that will ward you off from all evil. Some of the bastards looting went through our public educational system and that makes their reading comprehension skills suspicious and a big chance they ignore the sign. Other simply won’t give a damn and think you are bluffing so you better be ready to engage them with your “Royal Flush.”

If something shows at its best (or worst) the principle of partnership, is the immediate time after a disaster. It is amazing how easier things go hen you can rely on somebody who know what needs to be done and allows you to take a much-needed rest. Lone Wolves tend not fare well.

One thought on “Post-Disaster Time and Human Management.”