I had no idea who CJ Pearson was.  Apparently he’s a 16 year old conservative pundit (?) who became famous for an anti-Obama viral video.  I guess that is why I have never heard of him, I have not the Twitter and don’t follow any vlogs on YouTube.

He watched the SOTU and decided to send a Tweet mocking Congresswoman Ocasio-Cortez. 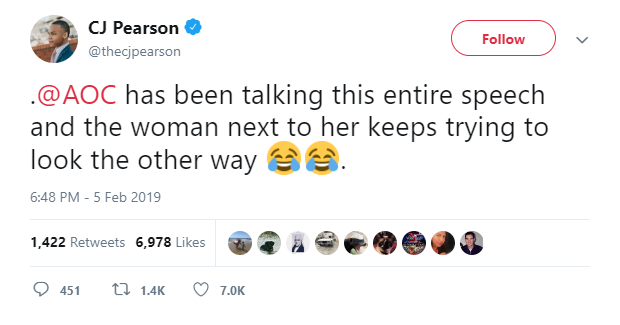 I’m not sure what he’s talking about, but whatever.

Two things to point out here.

First, it would have been just a tad more respectful if he had said “the Congresswoman next to her.”

If you can, it’s probably the handful that are always the subject of the news or they wear a stupid fucking hat.

I could probably do a little better with Senators.

The fact is that most Representatives are nothing characters who never make the national news, don’t get interviewed, and nobody outside (and usually inside) their districts care about.

So that some 16 year old boy didn’t recognize some random Congresswoman who was sitting next to a Congressional media darling is par for the course of America.

It turns out, the woman sitting next to AOC was Congresswoman Nydia Velazquez.  If you have never heard of her, it’s okay, neither had I until today.  She has been in Congress since 1993, starting in NY-12 and being redistricted to NY-7.  A Google news search about her reveals almost nothing about her, mostly just captioned photos where she is one of many Representatives in a picture.

Not for Congresswoman Velazquez, she decided to ratchet that up to 11. 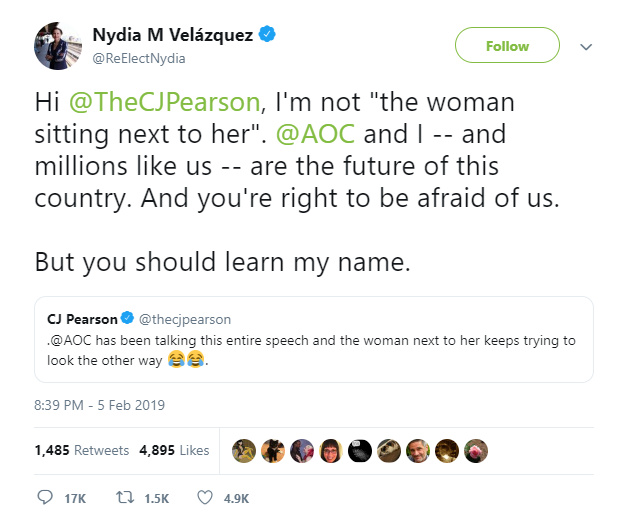 As an aside here, she’s a 65 year old woman who has been in Congress for 26 years.  She’s far from being part of the spunky class of Freshmen.  She’s many things, but she’s not the future.

“And you’re right to be afraid of us.”  Holy shit that is some ominous, threatening language from a Congresswoman directed at a 16 year old kid.

That’s not how our government is supposed to work.  We are not supposed to be afraid of our Representatives.

Abuelita Ocasio-Cortez here may not like that she is such a backbencher that a kid 49 years her junior didn’t know who she was despite her being in office for a decade longer than he’s been alive, but that still doesn’t give her the right to act like a slighted monarch.

Scratch a Leftist find a fascist underneath.  In 2019, you don’t need to scratch them anymore, you just need to sent a Tweet their way and they will let the despotism out.