One of the reasons we had a racoon problem earlier this year was because one of our chickens was badly injured in some sort of attack. As my lady described it, she was “gloved”.

At first we thought the rooster had done it. Then we thought that maybe a hawk had down it as there are a number of hawks around here. Some animal had ripped the top of the chickens head off. It blinded her completely for a couple of weeks but she seems to have one poorly working eye at this point.

She is currently kept in a pen near the other chickens and the rooster but away separate from them. At the time of the racoon incursion she was being kept safe in a big plastic tub on the porch.

The racoons were attracted to her scent and sounds and found chicken food to eat instead.

This was driving the need for something between .22 and 30-30. I could have used the PC-9 but it really didn’t feel like the right choice.

I’ve done a little bit of smithing on it. It needs more. It shoots exactly where I want it and is reliable after the first round chambers.

I had finished emptying almost all of my .357 magnum as I wanted to load them with 2400 instead of Titegroup. So it was sitting empty waiting for me to get more rounds loaded.

Last night my daughter heard her rooster give the alarm. She grabbed an ax and headed for the hen house. I figured that I should be the good father and head out to support her.

I quickly ejected my last 7 rounds of .357 form the Ruger GP100 grabbed the R92 and my light, started loading and heading out the door.

When I get out there daughter is pointing out the footprints. I tell her to search for more footprints leading away as it must have hauled ass when it heard my daughter head out.

We don’t see anything so daughter goes to check her chickens. The head count isn’t right so she goes to the back of the hen house and opens the door and a possum comes scurrying out between her legs heading across the snow.

I track the possum as it moves away. Bring the rifle to my shoulder, thumbing the hammer back as I do. Trigger finger is still on the receiver, outside of the trigger guard.

Line up, verify backdrop, press the trigger and there is a sharp bang. Nowhere near as loud as the 30-30.

The possum isn’t even twitching. I move up and verify. It is dead, really. No doubt about.

Since this is around 2300 wife is in bed asleep already. She woke up and immediately texts us for a report. We head in and give her the report.

After reporting in daughter goes out to get pictures so that she can brag to her friends that we have another dead animal. The skeleton will be processed but we aren’t interested in eating this animal.

The .357 magnum was not loaded to full power. It was still bottom end of my .357 loads. But the bullet I used did the trick.

The results of hitting a possum with this round are after the cut. They are graphic: 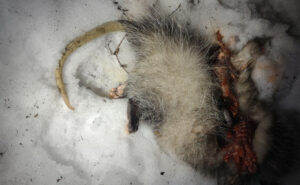 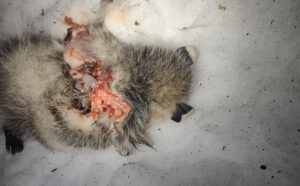 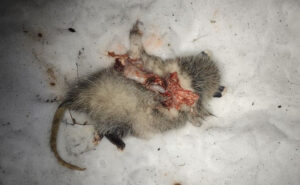 Yep, that “low” power .357 took the insides and put them outside the possum. We’ll be testing against other critters as opportunity presents itself.