SCAD and the memory hole

My wife and I were just in Savannah for a buddy’s wedding.  It is a beautiful city.

Right smack in the middle if it a festering intellectual carbuncle called SCAD.  I know it sounds like a sexually transmitted disease, but it is an acronym for the Savannah College of Art and Design.

When it comes to Art, I revere the work of the great masters, and the skill it took to create works like the Pieta or The Death of Hippolytus.  I really do enjoy Art Deco.  It is art that embraces the man man as opposed to nature.  Art Deco is how to something industrial like a train or a toaster and make it aesthetically pleasing as well as functional.

There is even some pop art that I like.  I like the Retrofuturism of Bruce McCall and the genera known as Dieselpunk because, like Art Deco, it is aesthetic technology.

I have a print in my office that my wife got me called At the Roburbia Cafe. 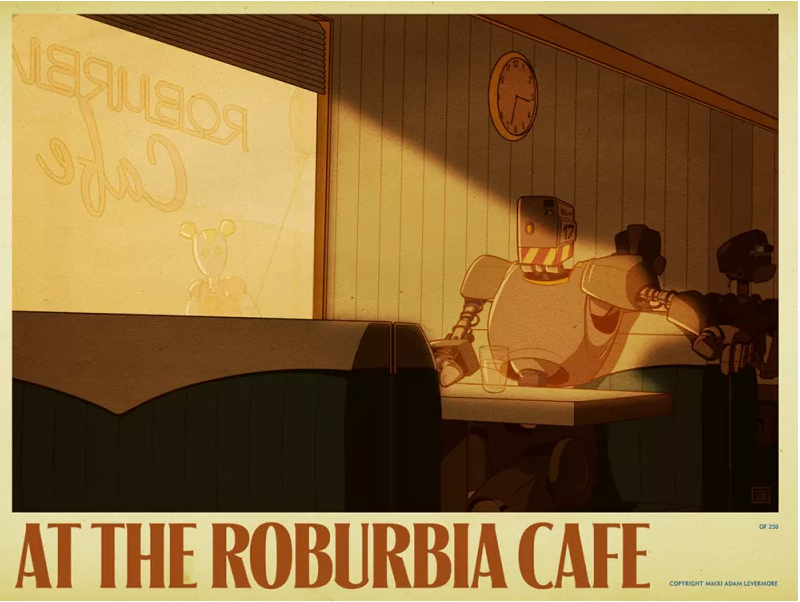 One of the things I like about art like this is, yes it takes talent, but it is also a little tongue-in-cheek.  I can’t imagine someone drawing a picture of a robot sitting in a cafe being all snooty about it.

When we were walking around the historic downtown of Savannah, we went into the SCAD gallery.  It was nothing but the kind of art that I don’t get and viscerally hate.

I don’t know what the fuck this is, but I do know the kid who did it thinks of him self as a great artist for doing it. 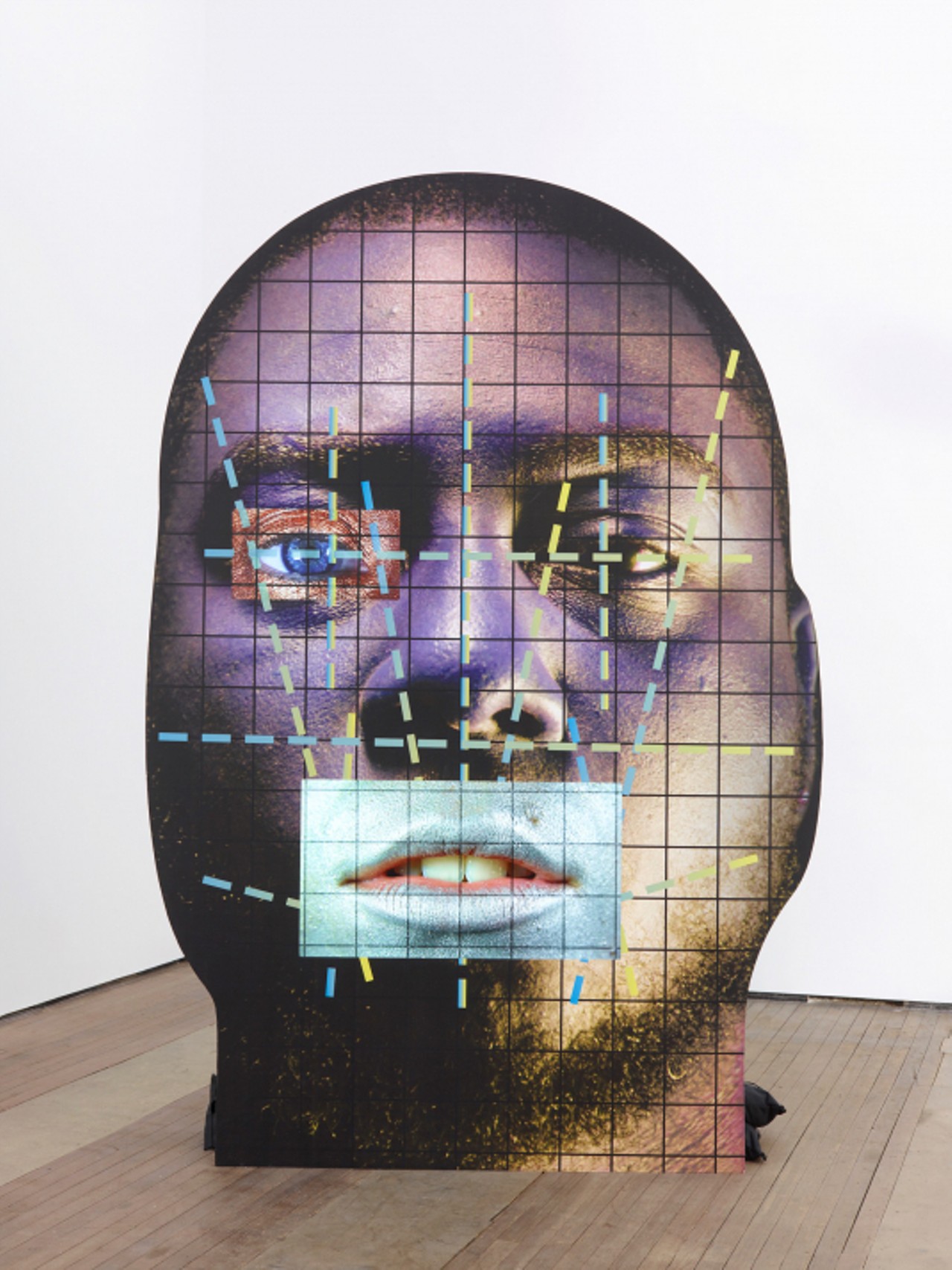 Some of that is reflected in the shitty art, but some of it is not.

From The Miami Herald:

I bet you can guess where this is going.

Students and alumni at the Savannah College of Art and Design in Georgia are petitioning the prestigious art school to strip Supreme Court Justice Clarence Thomas’ name from an academic building.

The petition on Change.org is called “Take A Sexual Predator’s Name Off of SCAD’s Building” and had more than 1,000 signatures by Friday morning.

First of all, Justice Thomas was never accused of being a “sexual predator.”  At most he was accused of making some crude comments.  The FBI did an investigation and found no evidence of malfeasance.  The Senate investigated and found nothing.  Thomas was eventually confirmed to the Supreme Court 52-48.

“I don’t want any other female who has hopes and dreams to have to walk through the doors of that building. They shouldn’t have to be subjugated to that toxic feeling,” said recent graduate Sage Lucero, who started the petition, according to WJCL.

That is some social justice bullshit.  “Subjugated to that toxic feeling?”  Because the building was named in honor of a Supreme Court Justice who was the target of baseless accusations because he was a black man that didn’t support affirmative action.

But amid furious debate over Supreme Court nominee Brett Kavanaugh, some are demanding a change.

“In the four years I attended Savannah College of Art and Design, I wasn’t aware there was in fact a building named after Clarence Thomas until it was brought to my attention due to the recent occurrences in the Supreme Court involving Dr. Ford and Brett Kavanaugh,” Lucero wrote in the petition.

So none of these dumbasses actually knew who Justice Thomas was until a few days ago but somehow that still oppresses them with a toxic feeling?  Social justice has entered the world of the supernatural where a name has power even if you have no idea what it is.  Then again, these people probably haven’t read anything more or deeper than Harry Potter, so I’m not surprised.

“When will we learn that a victim’s trauma should outweigh politics? For women like Dr. Ford, and Anita Hill to come forward and speak out about what happened to them is extremely traumatic. For someone to not believe a victim who remembers sheer details such as laughter and has gone through therapy because of it is honestly disgraceful,” Lucero wrote in the petition.

When should an accusation without evidence or corroboration outweigh the presumption of innocence and the rights of the accused?

Just because a woman cries on the stand doesn’t mean her statement is 100% accurate.  That’s not how memory works.

Lucero wants the school to rename the building after Anita Hill.

“It’s utterly disgraceful to me that I attended a school where a building was named after a sexual predator. And not just any sexual predator, one who wrongfully won against a woman’s word,” she wrote.

Right now I feel I need to make a suggestion to the legal community, even though I am not a lawyer.  People who believe this shit need to never find their way onto juries.  Every defense attorney in the country needs to come up with a question for voir dire that somehow brings in the Kavanaugh hearing to determine if potential jurors are the kind who put social justice above evidence.

When asked their opinion, many students said they didn’t even know the building had been named for Clarence Thomas, WJCL reported.

“I just think it’s a great coincidence that it’s coming out right now, for me at least, and making sure everyone else realizes it,” Lucero said, according to WTOC.

She has found a way to use the Kavanaugh hearing to bully her school.  This is nothing more than a power play, just like Mattress Girl.

These kids clearly have learned nothing and know even less.  They have no morals beyond whatever puts them into power.

SCAD has failed them in every way.  They can’t think critically, they don’t know how to address facts, and they paint for shit.

If I were Trump right now, or if I ever got elected President or Governor of Georgia, I’d straight up Kelo v. New London SCAD off the face of the Earth.  Use eminent domain to take the land and raze the building and hand the ground over to developers to do something useful with it.

I don’t think the people of Savannah will complain all that much.

When we drove through Savannah, we got a little lost when Google Maps told us that SCAD campus parking was public parking.  We asked a student there for help to find our way off campus back to the rest of down town.

He looked at us and said “You’re toursts? Ewwww…”

Not kidding, that happened.  In a tourist city.  On a campus that has a museum.

So clearly they teach a shitty attitude as well.

And I promise, hand to God, if I am ever able to Kelo SCAD to developers, I will spend all the money I can get to build a world class indoor shooting range on top of the footprint of where the SCAD gallery used to be.

4 thoughts on “SCAD and the memory hole”