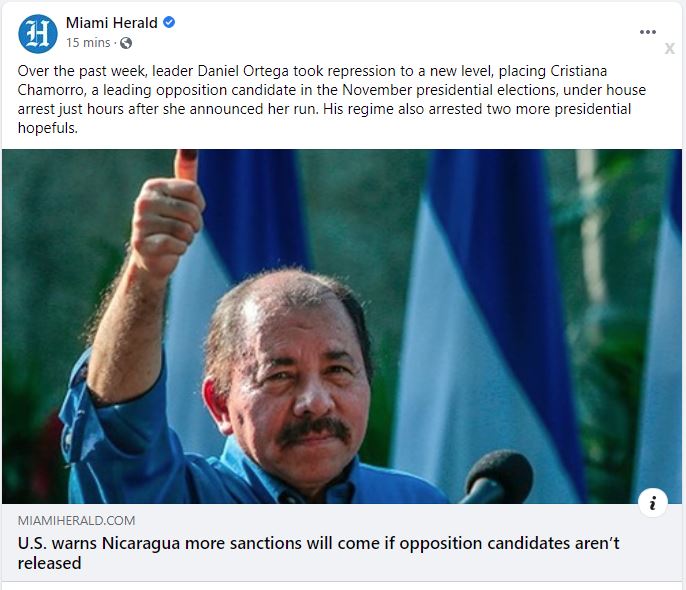 Daniel Ortega made a dumb mistake years ago when he was the leader of the Sandinistas and ruler of Nicaragua: He allowed for free elections and got sacked by Violeta Chamorro, the widow of Newspaper Editor Pedro Joaquin Chamorro who was murdered by the Somoza regime toppled by the Sandinistas.

The Sandinistas did a crappy job as government (Surprising no one) and that is why they lost. But they were very good at selling themselves again, promising all kinds of shit to people who actually voted them back in power in 2007 and has been there ever since and plans not to leave anytime soon. Just like his political buddy Hugo Chavez, he uses all the means of government to suppress opposition under a thin veneer of legality. And allow me to repeat myself: He is not going anywhere soon unless cancer also decides to pay him a visit.

Voting stupid carries consequences. Specially when you don’t have the means to remove bad government.

That whenever any Form of Government becomes destructive of these ends, it is the Right of the People to alter or to abolish it, and to institute new Government, laying its foundation on such principles and organizing its powers in such form, as to them shall seem most likely to effect their Safety and Happiness. Prudence, indeed, will dictate that Governments long established should not be changed for light and transient causes; and accordingly all experience hath shewn, that mankind are more disposed to suffer, while evils are sufferable, than to right themselves by abolishing the forms to which they are accustomed. But when a long train of abuses and usurpations, pursuing invariably the same Object evinces a design to reduce them under absolute Despotism, it is their right, it is their duty, to throw off such Government, and to provide new Guards for their future security.

Which it is not a coincidence this was recognized some years later by the Founding Fathers.

“A well regulated Militia, being necessary to the security of a free State, the right of the people to keep and bear Arms, shall not be infringed.”

4 thoughts on “Stupid Voting has Consequences.”