You have to give it to Dutch Bros. when instead of doing the standard corporate knee-jerk reaction of firing an employee who defended himself against armed robbers, they are offering him support, keeping his job and revising his policy on no weapons in the workplace.

Yesterday I am talking on the phone with an old family friend in Venezuela. I asked him about the status of the new Disarmament Law and if it was already on the books for good. It turns out it is not yet, but they are expecting its final approval soon. He also told me that he had to part with his collection of 12 assorted weapons in order to remain legal as the new law only allows one firearm per person per lifetime. He sold some and gave the others to friends and relatives that were looking for a gun and hoping (key word: hoping) they can register them before the new law takes effect.

In the meantime, murders keep climbing and the situation is so bad, Hugo’s Government has all but clamped down on news outlets so they do not report crime faithfully. The newspaper El Nacional was raided by the political police for publishing a graphic image of the bodies of murder victims stacked like abandoned furniture at the overwhelmed morgue in Caracas.

So what is the result of a true Gun Free Zone country? What if legal access to firearms is so controlled by the government that it is almost impossible to buy even a single shot shotgun? What if there is no easy access to ammunition either and you were restricted to only 50 rounds a year (no hollow points or expansive ammo allowed? What if reloading your own ammunition is against the law?  According to Brady and Co. it would be paradise on Earth, Peace in Our Times, People on the streets holding hands and singing Kumbaya My Lord. No more homicides, armed robberies, no gunshot wounds, all peachy.

But reality rears its ugly face and shreds the myth of Gun Free peace and harmony. 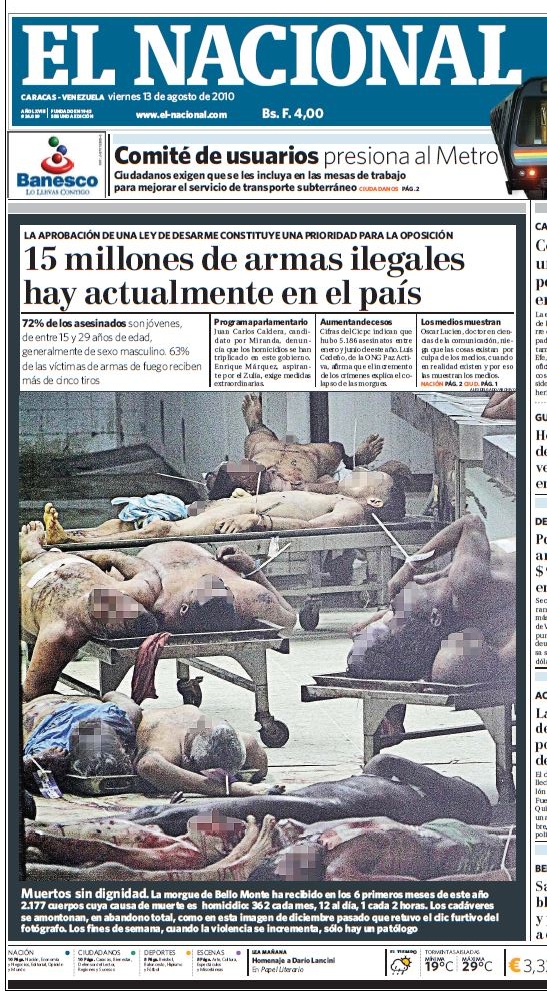 The caption of the picture reads: The Dead without dignity. The Bello Monte morgue (in Caracas) has received 2,177 murder victim’s bodies during the first six months of this year which comes to 362 per month, 12 a day and 1 every 2 hours. The bodies pile up in total abandonment as this image from last December. During the weekends where violence increases, there is only one Medical Examiner on duty.

And this is just the capital city of Caracas. During 2009, there were 16,047 murders in the whole country of 27 million people, a monumental failure in terms of keeping the citizens safe and nobody is doing a damned thing. A Socialist Government that has failed to fulfill the promises to the people might not be interested in either fighting crime and much less give its subjects the power to defend themselves.

There is an unofficial state of emergency in the country where people are literally afraid to walk the streets.  About 95% of all homicides go unresolved since the police, stripped of its good officers and substituted by politically-reliable yes-men are overwhelmed and/or participating themselves in criminal activities. And we are talking about a police force that made New Orleans PD look like Scotland Yard and the Templar Nights wrapped in one.

The Socialist Government is not interested in attacking the crime issue, why should they? Officials have bodyguards and are driven in armored vehicles everywhere they go, their neighborhoods are heavily patrolled by security forces and if the common folk are scared shitless of dying in the street or their homes, they have no time to be “conspiring” against the Revolution. It is much cheaper than having to develop a homegrown KGB and keep tabs on everybody.

PS: Charges were brought against the newspaper for publishing this picture. Government officials complain that they violate current laws protecting children against abuse. Remember, let’s do it for the Children!

The folly of diplomatic security.

The last couple of months I have been engaged in doing some paperwork that led me to the consulates of three countries. I would love to inform that in this era of enhanced terrorism alerts, the security would be airtight since they insist you must come to their grounds totally disarmed but you would be disappointed. I understand that Miami is not a hotbed for terrorism, but maybe because of that it makes for a more inviting target, specially when one of the consulates I visited was a past target of terrorism by at least two different groups.

The first consulate was an accidental test. As told, no weapons of any kind were allowed and I thought I followed the instructions but I did not and not on purpose. A local Rent-A-Cop was at the door and ordered me to drop all metal objects on a basket before going through the metal detector. Keys, change, pen cell phone (turned off of course), Surefire 6P and my American Snipers steel bracelet were put aside and I walked through the magnetometer which, of course, beeped.  I started doing the patting-myself dance and I realized that I had my Boker Subcom Wharcom on my back pocket. I kept doing the pocket patting and the Rent-A-Cop pointed at my midsection and asked me if my belt buckle was metal (I wear a The Wilderness Instructor belt every day) I said yes and he waved me in! No second go around through the detector, no waving me with the magic wand,just come right in.

The second was the first official test. Again no firearms but this time I had two knives with me: An old Swiss army knife and a folding with a 4 inch blade. I also had my Leatherman which has a blade of its own so you could say I had 3 blades. This Rent-A-Cop was pretty much the same even if it was from a different company. I had left my American Snipers steel bracelet on my wrist so it would be detected and create a misdirection: It worked beautifully. I showed it to the Rent-A-Cop, he nodded and let me in without any further checks.

The last consulate was even easier. The Rent-A-Cop was so enthralled that I would walk around in the daylight with a flashlight in my pocket that he ignored beeps and alarms emanating from my person while he fondled it and listened to my explanation that buildings tend to be very dark places if the power goes out during the day. For this trip and knowing that this country had been the victim of terrorism for over half my lifetime, I chosen to carry only the Boker again in my back pocket. I thought this place would be a much tougher nut to crack, but it happened to be way to darn easy. As a matter of fact I was carrying one of those leather legal size pad holder that are very cushy and I could have smuggled a small semi auto with several magazines inside because Rent-A-Cop didn’t even check it.

All three consulate’s floor plans are designed for one-entrance-one-exit-both-side-by-side which allows for no escape whatsoever unless you are inside the inner sanctum. But if you are in the public common area and a gunman appears at the door, you are plum empty of fecal material because you will be sprayed in a perfect killing zone. Barrel Meet Fish. Internationals Gun Free Zones are no fun either.

The worst part? I have to go back to the damned places.

We still are the New Negroes.

Although Say Uncle was only commenting about his lunch and the fact that the Lemongrass restaurant in Knoxville is posted as a Gun Free Zone as shown in the picture, I had a visceral reaction to the damned thing. 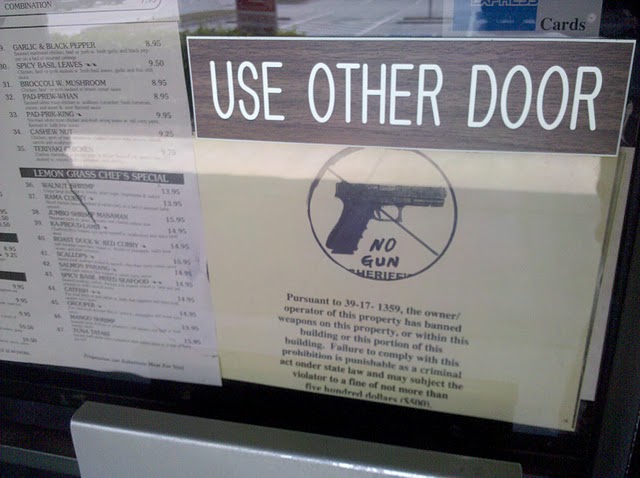 Although I am almost sure that it was not their intention, it is too frigging close to this one: 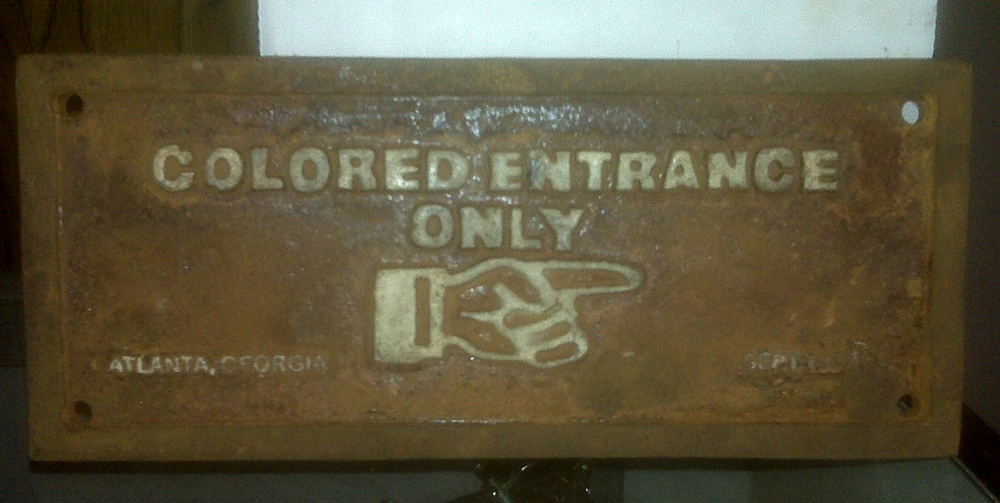 I remember seeing this video some years ago but I just bumped into it again and it needs to be shared. This is home video taken in Caracas, Venezuela of an active criminal band doing their nasty deeds absolutely unchecked. The area being filmed is a “barrio” which is the venezuelan version of a high poverty area dominated by criminals. No police dares to go there since the criminals are heavily armed and in absolute control. Anybody daring to bear witness to their activities will be killed alongside his family.

The begining of the video shows these “poor misunderstood” creatures just hanging around, chilling and brandishing their guns (red circles). But the good stuff begins at 3:26 and shows one of the Bad Boys just ripping people off stuck in traffic in a avenue that runs alongside the barrio. Check also 5:28 and the rest of the video after that. The victims were luck, for whatever reason these idiots did not bring gunplay into the equation, but it is not unusual for them to shoot first and then take whatever they like.

The gun banning measures of Hugo Chavez have raised crime in Venezuela to levels never thought before. Caracas, the capital city has a murder rate of 108 per 100,000. I don’t think Fallujah was ever that bad. And yet the solution is so simple, but dictators do love their unarmed subjects. So do criminals.

PS: The TV station that aired this video was penalized by the Government for “inciting sedition.”

In Gun Enema Land A.K.A Daley’s Hell A.K.A. Chicago, an elderly Veteran shoots and kills an armed intruder who broke into his house. And instead of counting his blessings to live yet another day in the company of his wife, this gentleman may be subjected to prosecution because he owned an “illegal” firearm: A handgun.

High profile Chicago lawyer Joel Brodsky already announced that he will take the gentleman in a Pro Bono basis to defend him against any charges that he may face by Cook County Legal Goons.

We hope that SCOTUS will eventually eliminate such stupid and homicidal ban in Chicago and any locale that allows people to be killed like baby seals.