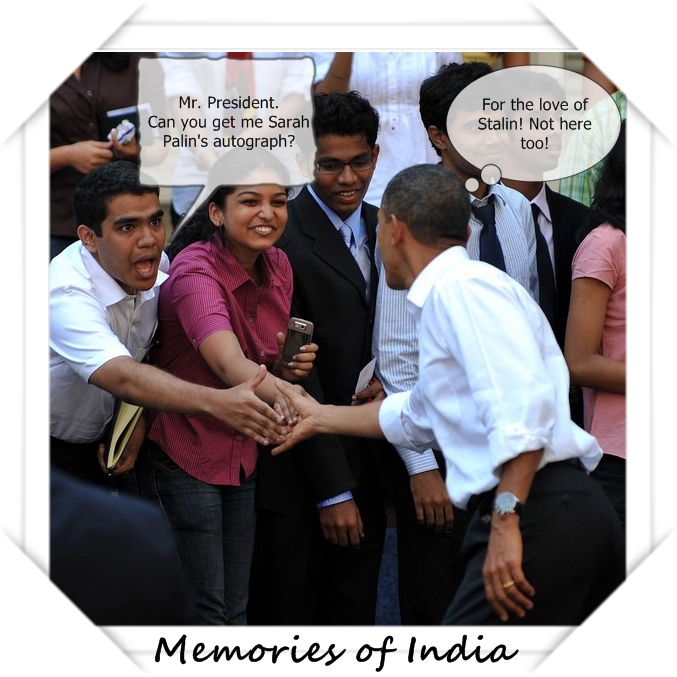 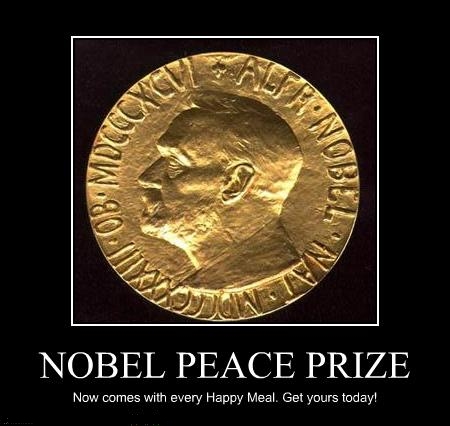 Hashish must be frigging good in Stockholm, Oslo or wherever!

UPDATE: Damn it, according to the DNC I am in the terrorist watch list.

Jesus! What a ride this last 60 days. From being blamed for the drug wars in Mexico to some unknown idiot bureaucrat in the DOD demanding to shred military spent brass to the biggest drop in the economy and the establishment of the bases of a Socialist Republic in the United States.

It is amazing to see that either journalists are too polite or to stupid to realize that when you say that the market drop has been the worst in 30+ years, it also includes the drop after 9-11. Or to call it like it is, President Obama was more effective in bringing down Wall Street than 2 jets crashing into the Twin Towers courtesy of Bin Laden.

The latest in grassroots movements is your local area Tea Party where people sick of the government waste of our taxes are starting to gather in protest. The resurrection of the idea behind the Boston Tea Party is seen by many with derision but so it was the original one. We are headed to a major economic crisis and this is the chance Liberal Socialist in our executive branch are waiting for to enact the death of the Republic.

But Miguel, surely you exaggerate. Well, you may think so, but contrary to what many think, what is happening now is not an unique event but it has been repeated in the past and most recently in Venezuela and Zimbabwe. A highly populist leader is elected thanks to the monies of rich idiots and the blissful adoration of a star struck liberal media. Leader takes power and economy tanks due to his ultra liberal economic policies, disrespect for the capital market and unbridled desire for social engineering. Next you know, economy tank, People enter in panic mode, demand solutions from leader, Leader provides promises of solution IF certain liberties are sacrificed for “The Common Good, People give up Basic Liberties, Leader does not fulfil promises, people are shafted and has no recourse but sit there and take it up the keister. Those were the common characteristics of Hugo Chavez and Robert Mugabe and, so far they are eerily similar to what president Obama is doing.  The one that struck me the most was ACORN taking over private property in the name of social reform and defense of the poor which is a faithful copy of Chavez’s Circulos Bolivarianos of Venezuela.

However there is one big difference so far between those Banana Countries (I won’t soil the title of Republic by associating it with those places) with the USA: Armed population. Both Mugabe and Chavez managed to introduce even more draconian gun control laws in countries already “free” from firearms before the final push. Roving bands of criminals and government supporters (and in some cases they are one and the same) now roam freely in cities and countryside terrorizing innocent subjects (no citizens there) and either stealing them of life and property or making sure no dissidence is felt. Unarmed People are just powerless to reclaim the rights the so freely gave away.

Interesting enough, Chavez ran his first presidential campaign under the banner of Change. Forewarned is forearmed.

Joke of the day. Obama sezs: Gun owners do not need to stock up.

Obama says that we do not need to stock up…suuuure bubba, we believe you. And the check is in the mail and I’ll respect you in the morning and call you tomorrow. According to the Chicago Sun-Times, we need not to worry because the Great and Powerful Ozmaba says:

“I believe in common-sense gun safety laws, and I believe in the second amendment,” Obama said at a news conference. “Lawful gun owners have nothing to fear. I said that throughout the campaign. I haven’t indicated anything different during the transition. I think people can take me at my word.”

Yep! Those pesky “common-sense” gun laws that have worked so magnificently in Chicago which now is the most crime free city in the United States, right? No murders at all in the Windy City, everybody is free and happy, while the birds are singing and the sun shines beautifully even at midnight during those basketball games in the inner city. I know, I know, enough with the sarcasm.

It irks me that Obama, disciples and minions thinks we are stupid. Peter Hamm, Propaganda Meister for the Brady Campaign against Gun Violence (also known as Brady Campaign to Save Jobs for Criminals and Guarantee Murderers get Fresh Victims Every Day) even displays his ignorance in a quote from the same article:

“Anyone who thinks they need to rush out and buy a firearm clearly has not been paying attention to how quickly we make progress on this issue. We don’t think these are first-time buyers. We think they are people who already have more than enough guns at their homes to protect themselves and are buying more.”

Peter, Oh buddy of mine. Civil Rights do not come with an “enough” clause. My right to defend myself against criminals do not have to be subjected to what a Washington or Chicago flunkie determines to be enough.  And dictating what is enough private property is the mark of the socialist worldwide, specially when they are ready to take such property from the hands of the Citizens under the excuse of the Common Good.

I guess we know where you guys are common from…. then again we knew that already and that is why we are stocking up.

Now this is funny with a dash of truth.

There goes my Tuesday: Obama to Rule the USA.

Warning Issued by The Law Dog.

Holy Crap! Valerie Jarret, co-chair of the Obama Transition Team informs us that Obama will RULE from day one. When the flying barrel of monkeys did we beecome a Third World Country where we elect our dictators?

With the elections over and The Great and Powerful Ozbama opening the Office of The President Elect (which I am guessing it is a way to say “I want the White House now but I can’t evict the darn occupants just yet), I’ve been reading how the press is finally fessing up to admit they might have been a bit biased in the coverage of the elections in favor of Obama. Well dearies, we kinda suspected that for a while now, maybe that is one reason newspapers have had such dismal sales numbers.

I read the news but yet I did not fall into despair or got mad and from what I have seen among my conservative friends, none of them are suffering from any mental malady because of the election results and sudden confessions of bias from the Mainstream Media. OK, the wallets are taking serious hits as we stock up for the possible renewal of the AWB, hoarding up ammo and raiding reloading supplies but today at the range a whole bunch of us were making jokes about The Great and Powerful Ozbama and happily sending bullets away in our monthly IDPA match. It occurred to me that besides political differences we have great lifestyles differences between the Conservatives and the Liberals. After Bush won both elections, support groups, holistic therapy, aromatherapy and whatever New Age B.S. available for those Liberals that went into catatonic state due to the pressure of having the Oval Office under the evil spell of a Republican. And let us not forget those who actually left the country for foreign Liberal pastures in Canada and Europe (Why they did not go to the Socialist paradises of Cuba and Venezuela remains a mystery to this day) only to return when they could not find a Starbucks or Birkenstocks or good quality tofu in the streets of the South of France or the corners of Montreal.

We Conservatives in South Florida, clung today to our guns with evil high capacity magazines engaged in a barbaric game of violence plus contributed to the Global Warming problem with the gases created by the discharge of our weapons. We laughed, pulled jokes on each other, gave tips where to find the best lead for bullet casting, initiated some 5 new fellows into the Gun Culture and enjoyed a nice day under the sun by the Everglades. The only aromatherapy needed was the smell of burnt propellant and the aromatic smoke of the cigar smokers, our group therapy was the Course of Fire Walk-Through with the inevitable jokes that seem to pop no matter how serious we take our shooting.

And then we left the range, tired yet refreshed with accomplishment. Satisfied we spent several hours with optimists & patriots who take the important stuff serious but not themselves. We hopped in our vehicles to our individual destinations still aware that The Great and Powerful Ozbama will try to make our lives miserable but we will not scare and we certainly will not run away to other countries because this is our country which we promised to defend against all enemies, foreign and domestic.

And we will do it.