Miguel sent me this a while back and I never got around to posting it.

He grabbed this picture off of Facebook, along with the following description. 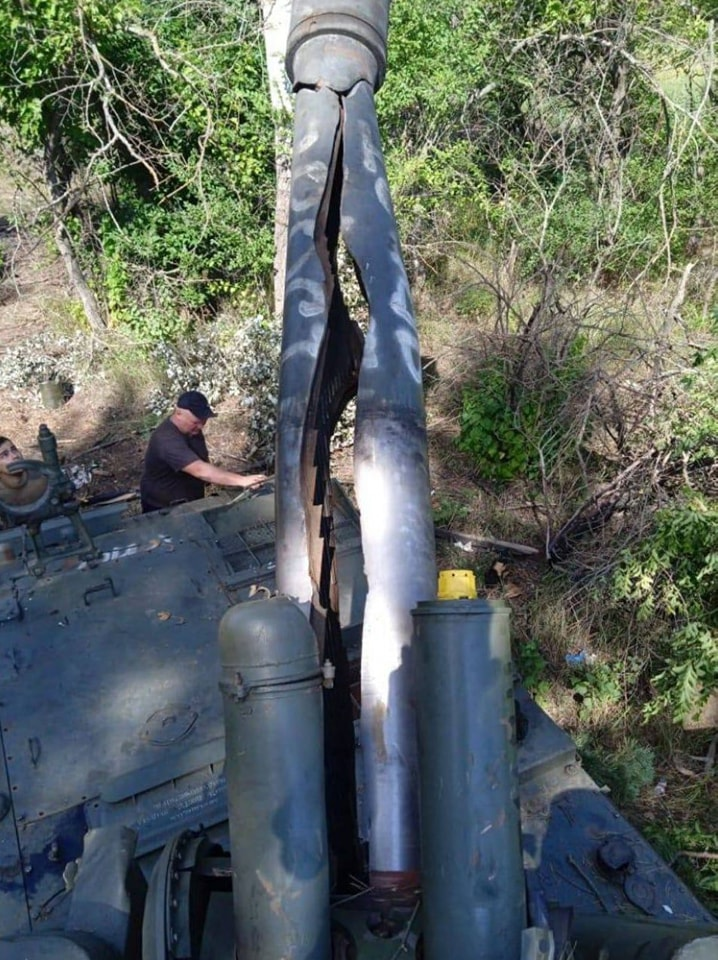 The first thing I can tell you is that the shell did not detonate in the barrel.

The barrel simply wore out.

Artillery opperate at roughly the same pressures at small arms round, between 45,000 and 75,000 psi.

That is because the material that gun barrel ls are made of, medium carbon steel, can only be heat treated and worked to a certain tensile strength.

Cannon and artillery barrels go through a secondary process after forming called autofrettage, which overstresses the ID of the barrel and plastically deforms it creating a residual surface compressive stress in the ID of the bore to increase fatigue life.  Similar to the process of shotpeening.

However, the life of a Cannon barrel, like and gun barrel is limited.

Cannon barrels are good for maybe a few hundred to a few thousand rounds.

The hoop and hertzian stresses of sending a heavy steel shell down a barrel causes radial cracks in the bore.  They propagate with every shot until the effective wall thickness has been reduced to the point were there is a risk of rupture during firing.

A good military will know from the development of the weapon what the expected life of the barrel is and will track the number of rounds fired to know when a gun barrel should be taken put of service.

A good military will do periodic bore inspections to determine how far along the life a barrel may be.

I’ve been hearing that the Russian army has been having supply chain issues.

So it’s not surprising to me at all, given the intensity of the fighting and the lack of resupply that this gun barrel was simply shot past it’s life and ruptured.

Had the shell detonated, it would have been much more damaged.  A 152mm Russian is in par with an American 155mm round.

As barrel ruptures go, this is actually a safe failure.  It split and vented.  The danger condition is if the barrel actually explodes and sends shrapnel everywhere. That can kill an entire gun crew.

On a side note:

I have spent much of my career in weapons development and engineering.

I’m bad at coming up with topics to write about.

I guess because I swe this sort of stuff everyday it becomes normal to me and I don’t think about how other people might have interests in it.

So I’m going to open this up to you, the readers.

Email the blog and ask away on the engineering of guns, weapons, etc., or just plain technology and failure analysis.

Anything that isn’t classified or ITAR protected I’d be happy to turn into into posts.