I have been watching the HBO miniseries Chernobyl and it is, as my retired Marine Corps co-workers would say, out-fucking-standing.

I’ve been waiting for the finale to write about it, but then something happened that made me accelerate my plans.

Before I go into that, I want to heap more praise on the show.

I have read a lot about the Chernobyl incident and the miniseries as about as historically accurate as they could make it and not be a boring documentary.

There are some minor changes, such as condensing a team of about 20 physicists to one character played by a fantastic Emily Watson.

The sets, the costumes, the cinematography, everything about the show expertly captures the grinding poverty and misery of the mid 1980’s Soviet Union as it was sliding into collapse.

It also captures the casual disregard for human life that the Soviet Union had for its people and the oppressive cruelty of the Soviet police state.

For example (a little physics here too):

Chernobyl was an RBMK type reactor.  Those are water cooled, graphite moderated.  RBMK reactors use non-enriched Uranium as fuel, and regular water as coolant, which makes them cheaper to operate, which is one reason they were so popular in the Soviet Union.

In a RBMK nuclear reactor, neutrons kicked off by U-235 strike other U-235 atoms and cause those to fissile (break apart) kicking off more neutron which hits more U-235 driving a chain reaction.

In a nuclear weapon, more than 90% of the uranium is U-235, so the statistical likelihood of neutron capture goes up and the fissile chain reaction goes into run-away and an explosion happens.

In an RBMK reactor, only 0.72% of the uranium is U-235, so neutron capture for a chain reaction is unlikely.

An RBMK reactor uses graphite to slow down the neutrons and drive the chain reaction.

In an emergency, a reactor is supposed to drop in all the control rods killing the chain reaction and shutting down the reactor.

In an RBMK reactor, there are two dangerous design flaws.  The reactors use water to both cool the fuel and act as a neutron absorber.  If the reactor gets too hot, the water will boil forming bubbles.  Steam is a poor neutron absorber compared to water, so the reaction rate increases.  This is called having a positive void coefficient.

The control rods also have graphite tips.  If the control rods are all the way out and dropped into the core, the first thing that the core sees is a neutron moderator (graphite) and not a neutron absorber (boron carbide) increasing the rate of reaction.

In Chernobyl, they were running a test and had the control rods all the way out and the cooling water at a low flow rate.  As the water boiled to steam, it stopped absorbing neutrons and the reaction rate increased.  The operators tried to shut down the reactor by inserting the control rods, but this dropped more graphite into the reactor.  The combination of boiling coolant and additional graphite caused the reactor to go critical and cause a steam explosion and criticality energy release.

In the fourth episode, you find out that the Soviet Union knew about this potentiality because of previous reactor tests.

Rather than issue a warning to the other RBMK reactors to make sure this would never happen, the KGB classified this as a state secret to keep the world from knowing about the flaw in the Soviet nuclear energy program.  So when the operators at Chernobyl ran their tests without this information, they blew up the reactor.

You also witness how the KGB and Soviet Government spent a lot of effort trying to hide their mistakes and how many lives that cost.

In the first episode, it opens seconds after the reactor explodes.  The chief operator of the plant keeps saying that an RBMK reactor cannot explode.  The personal dosimiters that the operators are wearing are all pegged at the max reading of 3.6 Roentgen.

Roentgen is a measure of the electrical charge generated by the ionization of air by ionizing radiation and is a good approximation for radiation exposure.

The chief operator keeps saying “those are broken it’s only 3.6 Roentgen.”

Later the military shows up measures over 15,000 Roentgen.

A good engineer would say “all of our meters are a max, so it must be higher than that.”

Steadfast adherence to the lowest measured number because that is the one that if reported will cause the least amount of embarrassment to the state is exactly the sort of thing that George Orwell wrote about in 1984 and has become known as “2 + 2 = 5.”

That is how the Soviet Union acted.

When Soviet physicists were trying to investigate the cause and solve the problem, the KGB spied on them, arrested them, and censored and restricted the materials they needed.

The Soviet Union even tried to cover up the explosion and didn’t evacuate people until radioactive Iodine started to rain down on Sweden and they couldn’t hide it anymore.

As you watch the show, you really get an understanding of the pervasiveness of the repressive police state that was the Soviet Union.

In view of all that, enter the famed horror writer, Stephen King. 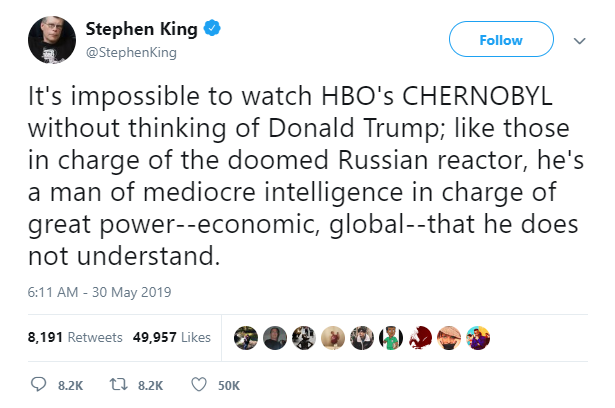 What the actual fuck is he talking about?

Everything about the Chernobyl was representative of all the failures of totalitarian Communism, and King can’t help making it about Trump.

This would be bad enough, but then the writer and producer of Chernobyl had to give King’s idiot assertion a boost. 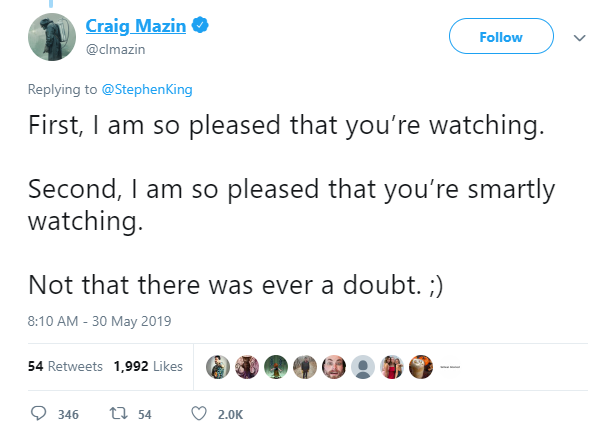 This is the guy who has done a truly amazing job capturing the horrors of the Soviet Union during its slow collapse in the 1980’s (the subject of my thesis for my minors in military history in college, something I know a bit about) and implies that really the show is about Trump.

I don’t know what to make of this.  I have three choices:

A little down the conversation, this happens: 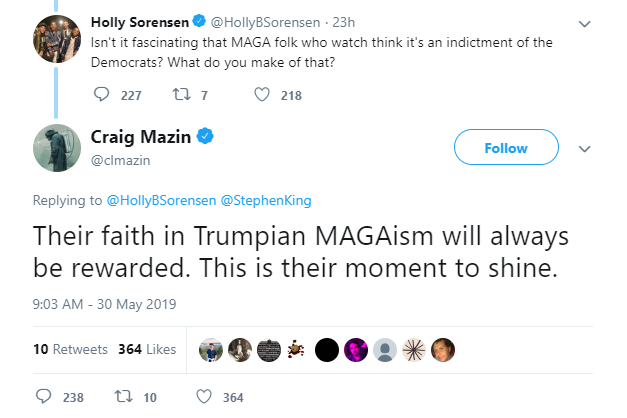 The answer is Number 3.  This guy has been made fucking retarded by TDS.

Chernobyl is a seething indictment of Socialist Statism that puts the power of the state bureaucracy over everything else, including the lives of the people.

There is an enormously powerful scene in the 4th episode in which the army is evacuating people from the radiation zone.

They come across this 80-year-old woman on a farm, milking a cow.  She refuses to evacuate.  She talks about how she lost her family bit by bit during the Socialist Revolution, the Holodomor, World War Two, and now she is the only one left but she never left the farm and never will.

The soldier dumps out her bucket of milk.  When she picks it back up and starts milking the cow again, he shoots the cow.

That is the Soviet Union.  It did nothing but kill and make suffer and oppress.  It left that women with nothing but a hut and a cow, then it killed her cow and dragged her out of her hut. 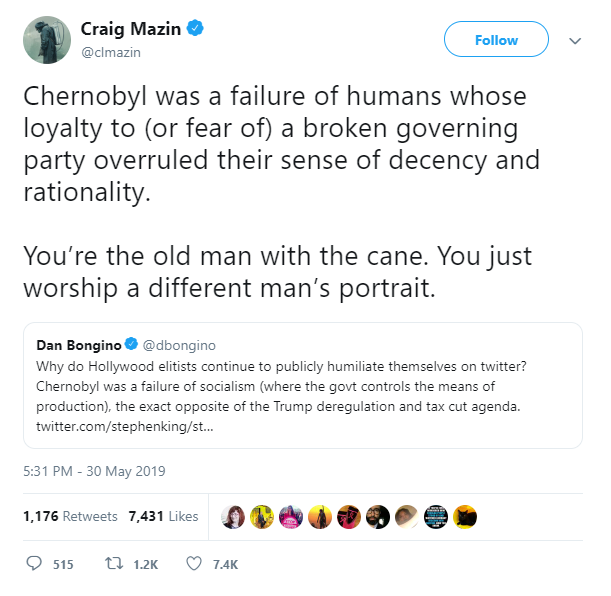 I want to make this point perfectly clear.  There was virtually no love of Stalin and no love of Lenin by anybody who actually knew Lenin.  The love Lenin was a carefully crafted cult of personality.

What there was, was fear.  A ubiquitous and omnipresent fear.

Stalin and Lenin populated the ranks of the state police and parts of the military with people personally loyal to them.  That loyalty wasn’t based on love or principle, but of mutual benefit.

Stalin and Lenin empowered thugs and brutes.  Taking people who in a normal society would be criminals and outcasts, and made them comfortable government officials in exchange for them using their love of inflicting pain and suffering on the people opposed to Stalin and Lenin.

Tyrants have always had brute squads composed of sociopaths given free rein to pray upon the political undesirables.

The KGB spied on everyone.  Silence was the name of the game in the Soviet Union.  People were afraid to speak in their own homes.  Everyone knew that at any time they could be dragged away and shot for even so much as criticizing some aspect of the state to a spouse.

So where are the MAGA brutes?  Where are the secret police spying on Americans?  Where is the ubiquitous and omnipresent fear of criticizing Trump?  How many people have been dragged away in the middle of the night and shot, with other afraid to even mention their name, less they be shot too?

Objectively speaking, there is nothing in the United States under Trump that parallels the conditions people lived in under the Soviet Union.

And yet, here is a world famous American author and a Hollywood producer saying it does.

He seems to revel to trying to point out how every criticism of the oppressive Soviet bureaucracy by conservatives is nothing but hypocracy by and it’s really Trump that’s evil. 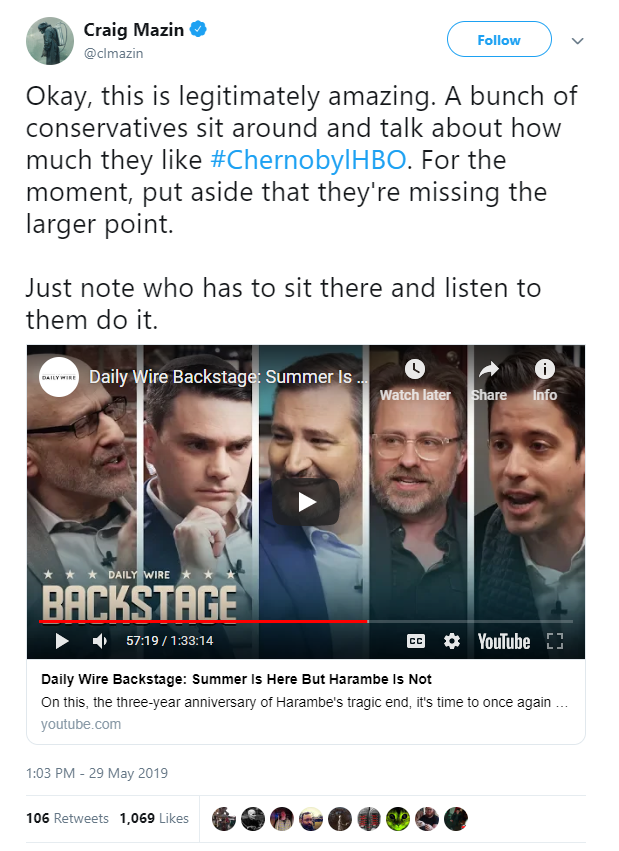 Here is the link to the video. 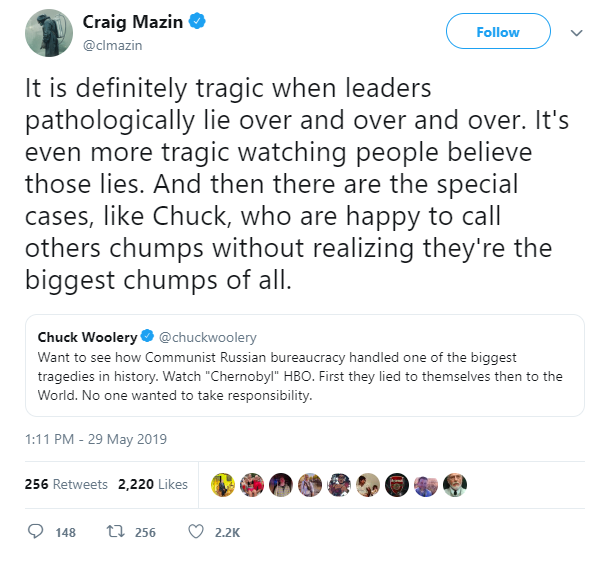 I fail to fathom this level of obtuseness.

This is ridiculous fucking bullshit that is an insult to the tens of millions that died under Soviet oppression and those that risked everything to escape it.

If you can write a show that so incredibly captures living under Soviet Communism and think that it is a reflection on Trump, there is no help for you.  Parts of your brain have atrophied and died.