Earlier today I said that Neil Gorsuch was going to need protection because the language online made it seem like there were those on the radical Left that might want to swing the balance of the Supreme Court with violence.

I saw this only a few hours later.

The original Tweet was deleted, for obvious reasons, but screen grabs are forever.  This guy writes for Esquire. 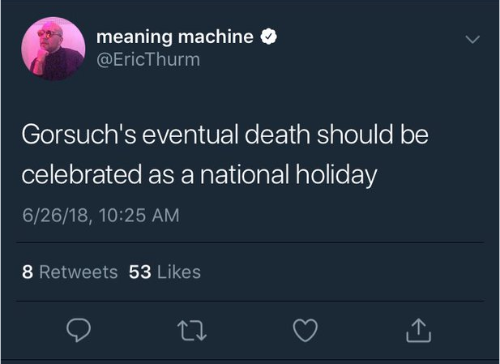 That is the kind of statement that could drive someone into doing something very, very stupid.

That may be the most glaring Tweet on the subject I’ve seen today, but there have been many that beat around the bush in their intent.

“Any tactic that reduces that power”

After claiming that Trump is running a Junta he uses the phrase “any tactic.”  Really?

The definition of Junta is “a small group ruling a country, especially immediately after a coup d’état and before a legally constituted government has been instituted.“

Not the winning side in a free and fair election, but that really doesn’t matter because this guy is operating outside of objective reality.

To him “unchecked power” means that SCOTUS sided with Trump in a decision made the same way the court has made decisions since Marbury v. Madison, 215 years ago.

This Tweet is a tacit call for violence, and giving the timing, against the Supreme Court.

If you thought Maxine Waters’ call for shaming of Trump officials was bad, Congressman and Jew hater Keith Ellison going nuts on CNN is worse.

“Steal and rip off a Supreme Court justice” is a language that encourages people in the worst way and targets Gorsuch specifically.

I’ve heard the word “civility” a lot in the last few days.  This isn’t about “civility.”  This is about not encouraging radical people to assassinate Supreme Court Justices because you don’t like the way they interpreted the law.

I’m afraid someone is going to take a shot at Gorsuch before long.

What happens next is anybody’s guess.

5 thoughts on “That didn’t take long”