Miguel sent me the link to the DOJ affidavit in support of the criminal complaint against Maria Butina.

The charges are more serious than just failing to register with FARA.

If two or more persons conspire either to commit any offense against the United States, or to defraud the United States, or any agency thereof in any manner or for any purpose, and one or more of such persons do any act to effect the object of the conspiracy, each shall be fined under this title or imprisoned not more than five years, or both.

I am not a lawyer.  So if someone is and I am wrong about this, please let me know.

The issue, as I understand it, is that Ms. Butina has engaged in activities on behalf of the Russian government that would constitute diplomatic relations without being an official diplomat.

This is where the confusion with FARA took place.

The affidavit sums it up this way:

These are the sections in the affidavit dealing with the NRA: 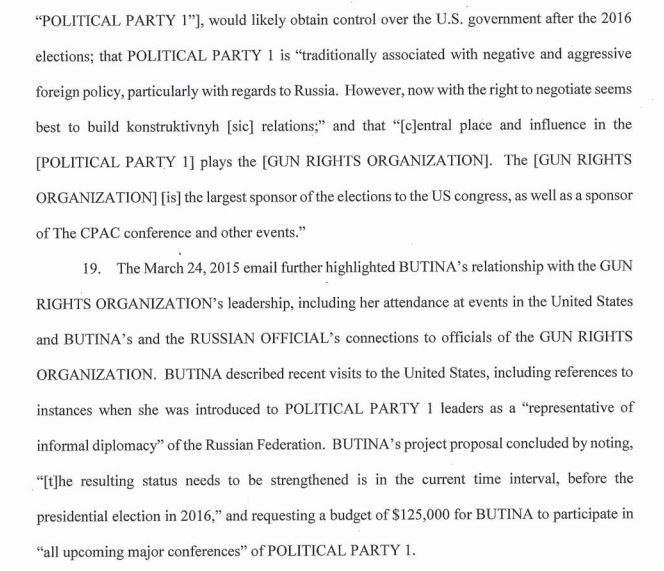 As I read this, we know that Butina had a previous working relationship with the NRA going as far back at 2012.

Butina was working for a Russian banker who had ties to the Russian government.

It seems that she wanted to use the NRA as way of establishing contacts with Republican politicians to create unofficial channels of diplomacy between these politicians and Russian interests.  This was because of the broad reach the NRA has and its support of CPAC.

The important question is what is stated in the third section.  Was the NRA acting as a courier of messages or was it just where the contacts were made?

Given all of this, I will still stand by my thesis from my last post.

There was a lot more text in the affidavit that covers the attempt to get Putin a seat at the National Prayer Breakfast than the NRA.  I still haven’t seen a single headline that mentions that.  It’s all “tied to the NRA.”

This attempt to open unofficial channels of communication between Russians and Republican politicians is still not spying or espionage in any way that I am aware of.

The way the media is pushing this is to imply that the NRA was turned into a Russian asset for the purposes of undermining the US Government.

If there are any patriotic NRA members you must leave the organization.!!!! It is working with Putin
Funneled laundered money thru NRA. Gun running, hacking our election, espionage.

This is their end game.  To destroy the NRA and leave gun owners without any effective lobbying group.

Next it will be (mark this date on your calendar so you when I predicted it):

“If you support gun rights you are a Russian agent.”

Whatever comes out in the wash, the media and the Left want this to be the Silver Bullet that slays the NRA and Trump and gun rights.

They will want to make gun control a patriotic, anti-Russian interference, position.

For them, a victory is destroying American’s oldest civil rights organization and the civil right it advocates for and they will slander us the entire time they are doing it.

We’re in for the fight of our lives.

7 thoughts on “The Butina Indictemnt”