The fifth column in the Jewish community

The last 48 hours has been really bad for me in terms of Lefty Jews hand wringing about everything but an antisemitic Islamist terrorist hostage incident at a Synagogue.

I thought that Ariel Gold of IfNotNow or Rabbi Ruttenberg were peak Yevsektsiya, but I think i found the worst.

It started with this (now deleted) obscenity: 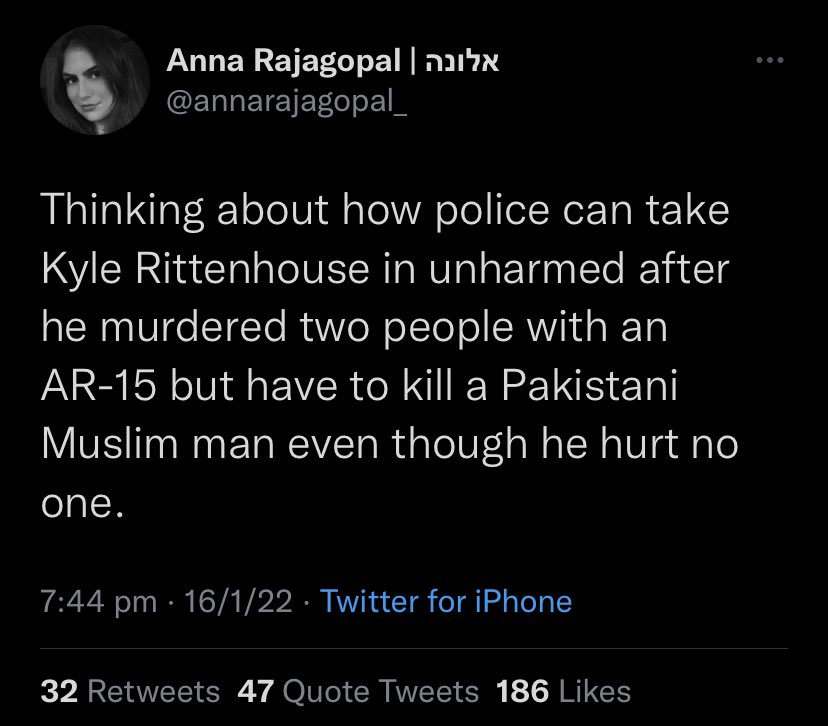 I am almost at loss for words.

Ignore for a moment that she is factually wrong about Kyle Rittenhouse, the idea that a SWAT team should not take out a guy who took hostages at gunpoint and threatened to blow up the building with bombs because said hostage taker didn’t actually kill anyone is beyond the pale of reason.

Of course, in her world, the only reason there police would shoot a man who took four hostages at gunpoint and threatened to detonate bombs is anti-Pakistani racism and Islamophobia.

I looked into this woman’s other Tweets and she is evil.

This tweet makes me feel like white Jews don't consider Jews of Color members of y'alls own community. "Our own safety" when you talk about "the Jewish community" has come to inherently mark whiteness as a basis for Jewish humanity & membership to community, and that's a problem. pic.twitter.com/StA2yeJxcW

"None of us are having a 'white' experience". I need white Jews to sit with the fact that your experiences with antisemitism do not make you People of Color, that Jews of Color *do*, in fact, exist, and that this language hurts us. pic.twitter.com/tx1XyF7mLp

White Jews are telling us that it's criminal to have any thoughts about yesterday that extend beyond "antisemitism bad" while they demand heavier police presence in our communities, weaponize racism & islamophobia, and continue to center their feelings and associated fragility.

She has a seething hatred of white (Ashkenazi) Jews.

Every post in reference to the Colleyville Synagogue hostage crisis is either to defend Islam from criticism or criticize white Jews for wanting security with the accusation that wanting security is racist against Jews of color.

Her statement “white Jews to sit with the fact that your experiences with antisemitism do not make you People of Color, that Jews of Color do, in fact, exist, and that this language hurts us.”  Is particularly disgusting.

Ashkenazi Jews, that is Jews of Central and Eastern Europe (including Russia) were not considered white.  The entire basis of Hitler’s Final Solution was that Jews were not ethically European.

Only very recently did the Left decide that Jews are white and only because of socioeconomic reasons.

Now here is this person lumping Ashkenazi Jews in with white people explicitly to deny us any minority status or sympathy.

So I’ve been trying to figure this person out.

She has put more effort in the last 48 hours to attacking white Jews for being racist than criticizing antisemitic terrorism.

Nearly a third of her Tweets are about solidarity with the Palestinians.

The rest are anti-Zionist lies.

What I’m about to do is Taboo but I feel like I must do it.

In Judaism, a Jew is a Jew.  Someone who converted yesterday is just as much of a Jew as someone who can trace their lineage back to the forefathers.

To question a convert or suggest they are not Jewish is a taboo, but I’m going to do it.

This person clearly hates the majority of the US Jewish population because of our skin color.

She obviously hates Israel and Zionism.

She defends Islam and stumps for Palestinians.

I think she converted to be a fifth column.

She can say the most vicious and vile things about the Jewish community and then say “but I’m a Jew.”

I think she’s a racist antisemite who converted for cover.

And I think the Lefist Jewish community that embraces her is welcoming in a fifth column.

At a time like this after an attack on Jews we should come together in solidarity.

Understand that our enemies see us as monolithic.

That’s why Islamists attack Jews around the world.  When some Palestinian supporter stabs a Jew in London, Paris, or Berlin, or beats up a Jew in New York City or South Florida, they believe they are striking a blow against Israel because all Jews everywhere are equal targets.

This hostage taker in Texas proved that when he attacked a Synagogue in Texas, in part, because he hated Israel.

At that same moment we have Leftist Jews inside the Jewish community attacking white Jews as white supremacists for wanting to be safe in our houses of worship.

I cannot stress this enough.  Leftist Jews are out to destroy our community.  Dividing it along racial lines at the very instant we sound have unity and demanding we make ourselves weaker and more vulnerable.

The Left fervently believes that the only good Jew is the dead Jew because a dead Jew is a victim, and they want to make us all into good Jews.

7 thoughts on “The fifth column in the Jewish community”