The horror: they like to make money legally and contribute to what they want. 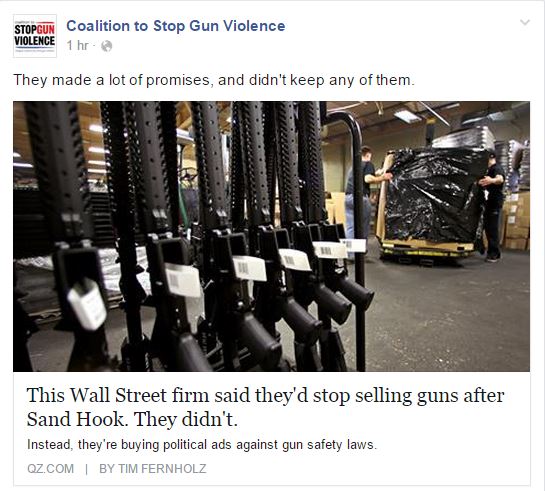 via Cerberus said it would stay out of the gun debate. Why are executives it appointed fighting gun safety laws? – Quartz.

Actually they never said they were going to stop selling guns, not that they could anyway. They stated that they were going to get rid of Freedom Group which is the umbrella where they keep the gun manufacturing companies and allegedly they didn’t according to some reports because they could not find anybody wanting to pay what they were asking. Then again they might be reluctant to sell because ” The company generated $887.7 million in sales and $143.4 million of earnings” in 2012.  And the report for 2013 was even bigger:

According to the “Full Year Financial Guidance Report” for 2013, issued by Remington’s parent company, Freedom Group, on December 9, the arms manufacturer is predicting the following results for the year:

Besides being idiotic to sell a profitable section of your investments, I would think that investors would scream bloody murder if the company would cave to political BS, reduce the amount of money going into their pockets and opening themselves for potential lawsuits for mismanagement of the investments.

As for the “buying of political ads,” you need to get to the bottom of the article to find out how much money was given by two executives: $15,000 to the NSSF. They are actually moaning about $15K for Gun Rights in an election year where Billionaires have given close to 10 million dollars to the I 594 in Washington State alone.  But that is different….

It must be close to election time to be seeing such pabulum being published.

2 thoughts on “The horror: they like to make money legally and contribute to what they want.”