Two weeks ago I covered a bill by Florida Rep Ted Douche to make all semiautomatic rifles and shotguns NFA items.

That was far fetched until the New Zealand Mosque Shooting.

Now a semi-auto ban of some sort is gaining steam with the Left.

Beto, at the most mildest, wont’ take yours but will let you keep the ones you already have (until you die that is, than your children can’t inherit them).

Beto O'Rourke: "If you own an AR-15, keep it. Continue to use it responsibly and safely. I just don't think that we need to sell anymore weapons of war into this public." pic.twitter.com/uqMA1jWOTf

This “the AR-15 is a weapon of war and designed to kill… blah blah blah…” was echoed by Joe Scarborough using this article from The Atlantic. 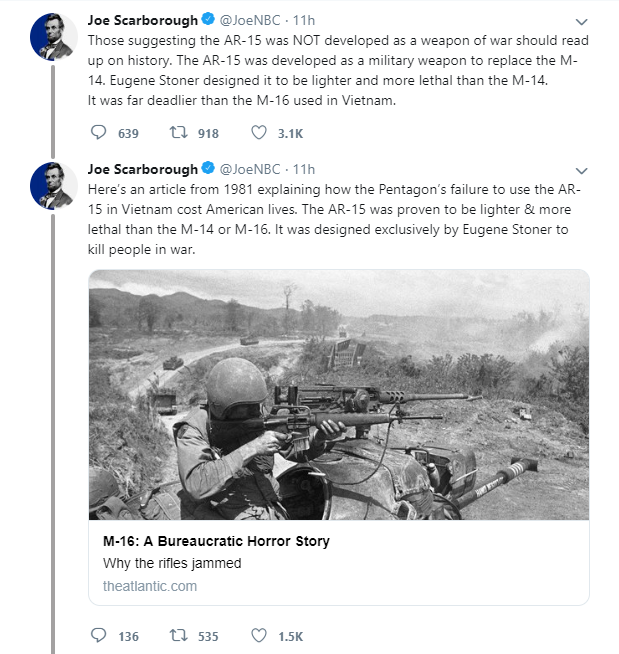 This is the article:

M-16: A Bureaucratic Horror Story
Why the rifles jammed

I will dissect this article in a later post, but the key points for Joe and Beto are this.

The subcommittee, headed by Representative Ichord, a Democrat from Missouri, conducted a lengthy inquiry into the origins of the M-16 problem. Much of the credit for the hearings belongs to the committee’s counsel, Earl J. Morgan. The hearing record, nearly 600 pages long, is a forgotten document, which received modest press attention at the time and calls up only dim recollections now. Yet it is a pure portrayal of the banality of evil.

Nearly a century before American troops were ordered into Vietnam, weapons designers had made a discovery in the science of “wound ballistics.” The discovery was that a small, fast-traveling bullet often did a great deal more damage than a larger round when fired into human or (for the experiments) animal flesh. A large artillery round might pass straight through a human body, but a small bullet could act like a gouge. During the early stages of the congressional hearing, Ichord asked Eugene Stoner, the designer of the original version of the M-16, to explain the apparent paradox of a small bullet’s destructive power.

Ah yes, the banality of evil.  More lethal means evil to these people..

As a weapons designer, I want the weapons I design to be as effective as possible at killing people.  In the hands of the good guys, that’s a plus.

When a solder kills and enemy combatant or a police officer kills a perpetrator so fast the bad guy doesn’t have the time to shoot back, and the good guy goes home alive, that’s not evil.  That’s a job well done in my book.

I remember reading about how the Marine were using 3 inch deer slugs in Iraq.  Apparently the 5.56 wasn’t killing jihadists fast enough and they would pull a grenade or set off a suicide bomb before they died, killing out guys.

A 3 inch, 1.25 ounce deer slug, center of mass was so traumatic, it shut people off like a light.  No more final “Allahu Akbar” and then pull the pin on a grenade.

How does Joe Scarborough defend his position? 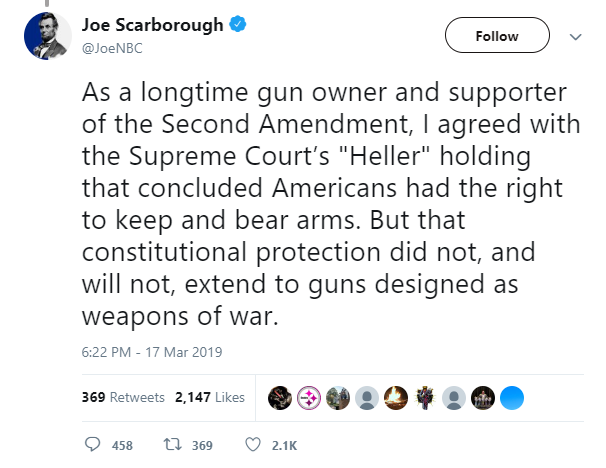 Oh yes, the “I have black friends” defense.

I have a gun, maybe an old hand-me-down, maybe a high end trap gun, but defiantly not something black, plastic, and scary looking.  I don’t keep my gun in my New York penthouse, and I never go to the range with it.  As a “Republican” formerly from north Florida, I was forced to mouth pities about protecting your deer rifle to get elected.  But let’s be honest, I’m an MSNBC host in New York City, married to the daughter of Jimmy Carter’s soft-on-communism and Iran, National Security Adviser.  Clearly, I do not respect the history or meaning of the Second Amendment, but I’m going to use the gun in the closet of one of my vacation homes as credibility to mask my anti-gun attitudes.

So we have two celebrity former politicians and political influencers going after AR-15’s now it is time to hear from a pop culture and social media influencer.

If you think people like this don’t matter, you clearly have not been following the Democrats use of celebrity endorsements to direct the youth vote. 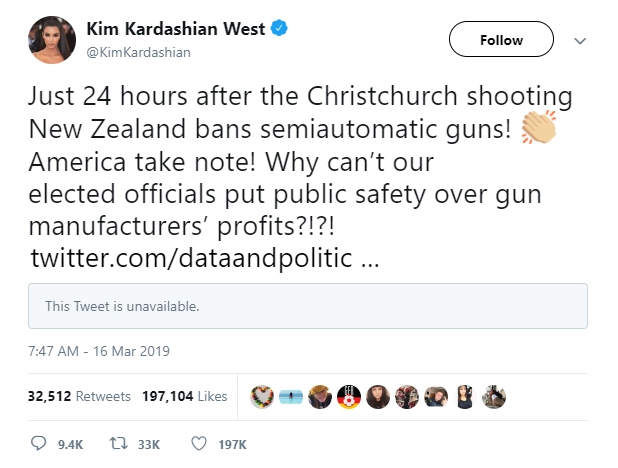 More gun industry blood libel.  That gun makers only sell semi autos because they are evil people who value profits and no human lives, and they know that if they stopped making them the world would be a better place with rainbows and puppy smiles everywhere, but no, they want the money.

Keep in mind that after Kim here had $4 million in Jewelry stolen from her, turned her mansion into a fortress with round the clock armed security.  So it’s fine for her hired muscle to draw their guns on a vandal (in a way that would get any of us arrested for brandishing) but you and I can’t own a semi auto.

Now we head over to an sitting member of Congress, US Senator Chris Murphy. 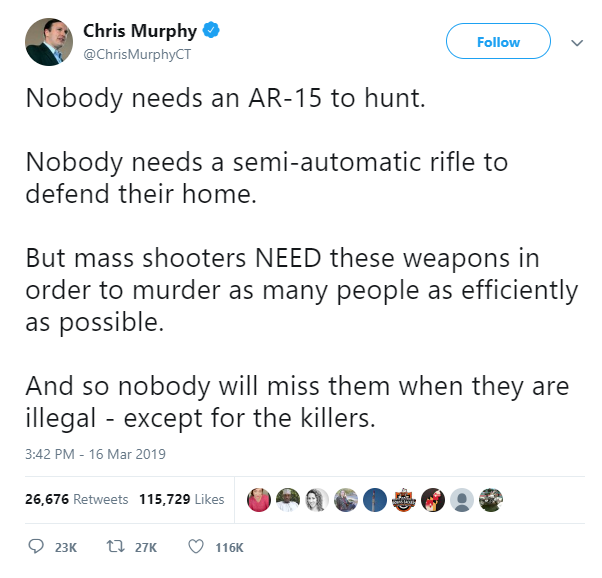 Frankly, I don’t care what mass shooters think they need.  The Port Arthur Massacre in Australia was carried out in part with a pump action shotgun.  The Aussies banned those.  Now they debate things like lever actions because they still have too fast a rate of fire.

Once the politicians ban semi-autos, they are going to go after everything else.  Why does a hunter need more than one round in his gun anyway, any ethical hunter shouldn’t have to use more than one bullet.

Remember what the New Zealand shooter said in his manifesto (I apologize for not finding the whole text, the media is doing a good job censoring the internet).

He says he also wanted “to create conflict between the two ideologies within the United States on the ownership of firearms in order to further the social, cultural, political and racial divide within the United states.

“This conflict over the 2nd amendment and the attempted removal of firearms rights will ultimately result in a civil war that will eventually balkanize the US along political, cultural and, most importantly, racial lines.”

So the shooter went on this rampage for the very specific purpose of making Leftists in the US crack down on gun rights.

They are doing EXACTLY what he wanted.

This is no different than had the Democrats on September 12, 2001 come out and said “there is no reason to be a Jew or a Christian, Americans are going to have to convert to Islam.”

It caves to the whim of terrorists, violates the Constitution, and seeks to eradicate a vibrant American culture by forbidding its practice.

This is the new push for the Democrats.  Not just an assault weapons ban but a total ban on semi-autos.  These people don’t know much about guns, but they did learn enough to know how we got around the Clinton AWB by feature removal.  They want to prevent that from happening again so they are upping the ante, see California, New York, and Connecticut.

This is going to be a major part of the 2020 election, I guarantee it.