The MCU and its Woke fans are going full Jew hater

I have no love for the Marvel Cinematic Universe (MCU) or Marvel comics.

I didn’t grow up reading comics and I’m not a fan of the super hero genre.

What I do know is that Marvel wouldn’t exist as it does without the volume of work of two Jews, Jack Kirby and Stan Lee.

But Marvel and Disney are Woke, and Wokies hate the Jews, so what is going to happen next will be an exercise in antisemitism.

Marvel is now in Phase 4 of the MCU.  So it has expanded well beyond the core heroes and into lesser known heroes and plot lines.

Everybody gets a hero.

Black Panther is its own franchise.

We had a woman take over Thor.

In the comic, the new Iron Man is a 15-year-old black girl, and she’s supposed to be getting a show.

When She Hulk twerks and gives Hulk a dressing down, we’re supposed to clap and say “you go girl boss!”

And throughout, we were told that if we didn’t absolutely love all of these characters we were racist, sexist, xenophobic, Islamophobic bigots.

Now the MCU has decided to add a Jewish super hero.

Her name is Sabra in Captain America 4.

And already it’s a “controversy.”

Let us not forget that the central plot of Black Panther was a black villan named Killmonger wanted to use Wakandan Vibranium weapons to kill all the white people and the only reason Black Panther stopped him was to keep Wakanda isolated.  Nobody said whipping out the world’s population of white people was wrong.

Black Panther was the greatest movie ever™.

Anyone who hated it was racist.

It was so sacred white people were not allowed to see it during opening weekend less the steal black people’s joy.

The Congressional Black Caucus gave each other the Wakanda Salute.

But a Zionist Jewish super hero is problematic and controversial.

But don’t worry, see Marvel hates her and uses her to drive their Jew hating Woke agenda.

Here is her in a comic which I can almost guarantee will end up on screen. 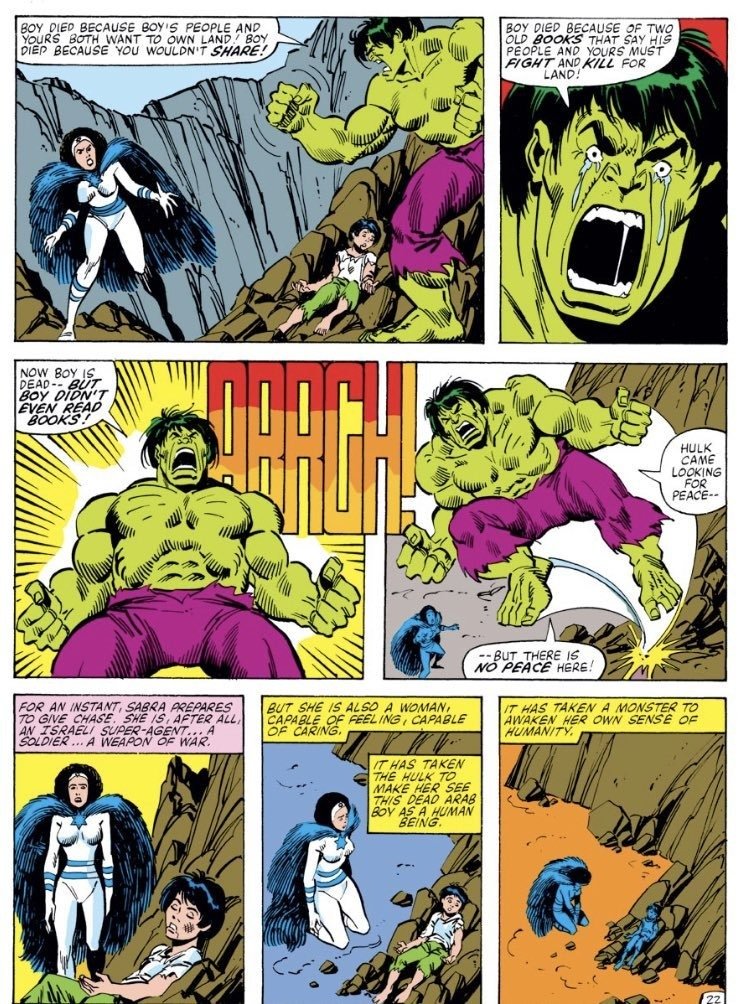 The Hulk had to give her a lesson in humanity after getting the entire origin of the conflict and what is written in Jewish holy scriptures wrong.

In Woke Marvel Jews murder Palestinian children over land they want to steal.

I’m not sure if this was written by Hamas or Mark Ruffalo.

So I fully trust that the MCU will absolutely disrespect Sabra in screen and make her into some sort of bad guy.

Speaking of Ruffalo, he is a known Palestinian supporter and Anti-Zionist.  So Marvel fans have been asking him to tell the MCU to drop Sabra all together.

The same Ruffalo that went on Twitter and called everyone misogynists for criticizing She-Hulk.

So he probably will.

Everyone gets a super hero that empowers their culture, except the Jews.

We get a super hero that needs a Woke lecture and even then her very existence is controversial.

Personally I’d rather not see a Jewish super hero than see what Marvel will do to her.