House concealed-guns policy keeps lieutenant governor away
Normally, Cyrus Habib would preside over an annual joint session. But he said he felt vulnerable.

Lt. Gov. Cyrus Habib did not preside at the governor’s address to a joint session of the Legislature on Tuesday because he felt vulnerable in the House chamber, where people can carry concealed weapons in the public galleries.

So nobody has threatened him directly.  He just thinks that Washington CCW permit holders are such dangerous, trigger happy lunatics that they will shoot him in the capital building during the governor’s address.

It’s good to see the Lt. Gov of Washington publicly state that he has that little respect or esteem for the law abiding gun owners of his state.

The annual event, which was held in the chamber of the House of Representatives, was attended by the nine state Supreme Court justices and every statewide elected official — except Habib.

So he’s the unreasonable,  paranoid asshole, but the media isn’t going to spin it that way.

Habib’s decision spotlights a difference in security approaches between the House and Senate.

Both chambers ban openly carried weapons in their respective galleries, where people can view lawmaker action from above.

In November 2017, Habib, a Democrat and the presiding officer in the Senate, ordered the ban expanded to cover concealed weapons. His action didn’t apply to the House, however.

Habib, who is blind, said he is concerned the House policy leaves him and every other elected official in attendance more vulnerable.

So he’s always hated CCW permit holders.  I guess if there was a real threat, other members of the government wouldn’t show up either, but only Habib is staying home.  Makes you think….

Habib’s staff notified House Democratic leaders and the chief clerk of the House early Monday that the lieutenant governor would not attend unless steps were taken to prevent anyone from bringing a concealed weapon into either gallery.

Initially, the lieutenant governor’s staff asked if both galleries could be closed. When that was rejected, they sought unsuccessfully to have some type of metal detection equipment deployed outside the entry doors.

The chief clerk’s office did increase security though it was clear no specific threat existed.

This guy is a self importance, paranoia, and prejudiced dickbag.

A statement issued Tuesday afternoon from the chief clerk’s office expressed regret at Habib’s decision not to preside. It noted that state clearly allows properly licensed individuals to carry concealed weapons on the state capitol campus, including the House galleries.

“Absent any specific security issue, and in accordance with the law, the House kept the galleries open so that the public could see its government in action,” the statement read. “Safety is always a concern, but so is the transparency of the Legislature’s work on behalf of the people.”

I think Habib’s grandstanding got on the chief clerk’s nerves.

Washington state has just passed some serious gun laws and it looks like they are priming to pass more.

This reminds me a lot of what happened in Australia, and not in a good way.

After the Port Arthur Massacre, the Australian government looked to pass a number of gun bans that were quite controversial.  The Prime Minster, John Howard, gave a speech before an Australian hunters organization, equivalent to an Australian version of the NRA.

During that speech, he wore a bullet proof vest, which was clearly seen under his jacket. 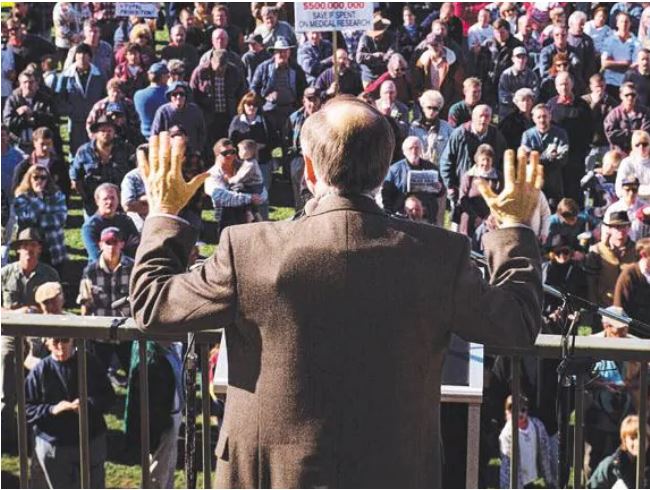 This angered the crowd.  The implication clearly being that the Prime Minister thought that the largest organization of law abiding gun owners in Australia would shoot him.

The Australian media presented the anger of the gun rights group as proof that gun owners were emotionally unstable people who shouldn’t have guns and the public perception made the controversial gun laws more popular.

This stunt by Lt. Gov Habib has the same feel to me.  He is conspicuously not at the governor’s address because he is worried about CCW owners shooting him – presumably over the gun laws just passed in the state.  Any outrage at just how offensive this is to CCW permit holders will be used to justify more restrictions on CCW because CCW permit holders are clearly angry and paranoid people.

This was nothing but a stunt to undermine CCW in Washington state.  Be warned of this guy.