The mother of a 10-year-old killed in the Uvalde school shooting has filed a federal lawsuit against the gun-maker and seller, the city of Uvalde, its school district and several law enforcement officers.

Sandra Torres’ daughter Eliahna was one of 19 students and 2 teachers killed by an 18-year-old gunman at Robb Elementary in May.

“I miss her every moment of every day,” Torres said in a joint press release with her lawyers from Everytown for Gun Safety’s legal team and Texas-based LM Law Group. “I’ve brought this lawsuit to seek accountability. No parent should ever go through what I have.”

The new lawsuit alleges that Daniel Defense — the manufacturer of the shooter’s weapon — violated the Federal Trade Commission Act, arguing that the Georgia-based company’s marketing on social media and video games “prime young buyers to purchase AR-15-style rifles as soon as they are legally able.” Earlier this year, gun-maker Remington settled a lawsuit for $73 million with the Sandy Hook shooting victims’ families who had also targeted the company’s marketing.

I said the holders of Remington who settled the Sandy Hook lawsuit were going to fuck us over.

Now every grieving parent will be targeted by the blood dancers to file a lawsuit that is engineered to be a runaround the PLCAA.

Just look at the opening of the text of the lawsuit: 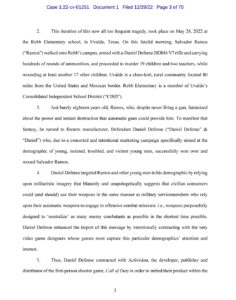 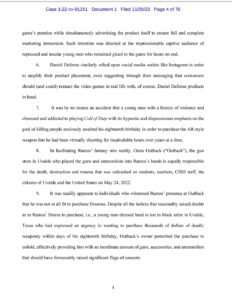 This is the Daniel Defense ad they wanted for the Super Bowl.

Their entire marketing campaign is “be a responsible loving parent abd buy our gun to defend your family.”

But a few crying moms and some sympathetic jurors and they will lose.

Unless a Judge in Texas recognizes the purpose of this lawsuit as a way of voiding the PLCAA and dismisses the case.

The Sandy Hook parents and the anti-gun industry has figured out a new avenue for lawfare and they are going to use it.

It is going to suck for the industry unless it’s stopped.