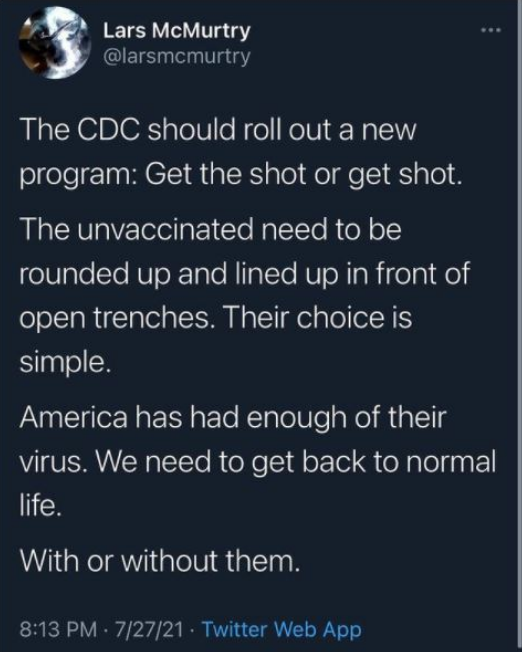 I am still working my way through Ordinary Men, so the description of Jews being stood before trenches and shot is still fresh in my mind.

What this Tweet reveals is just how partisan and political this really us.

The most unvaccinated group in the country is Black people.

Do you really think this guy is for the extermination of African Americans?

White elderly are the most vaccinated group in America, a demographic that is heavily Republican.  Remember that the Media attacked Governor DeSantis for prioritizing vaccinating the elderly because they claimed he was prioritizing his voting base.

The narrative is that all vaccinated people are good, obedient Democrats and all unvaccinated are bad, Trump supporting, inserectionist, Republicans.

Ergo, some Tweet about the mass murder of the unvaccinated is code for/tantamount to calling for the mass execution of Right wing Republicans.

Which is why Lars here is so emboldened to say this.  Because the Left has always believed that their utopia can be achieved if they exterminate the people who disagre with them and stand in their way.

This attitude, or something similar, toward the unvaccinated is held by a lot of people.  This is going to get very bad as long as this narrative is maintained.