This is why lying and refuse to really discuss issues are important for the Opposition.

The Conversation is a publication with a decidedly population disarmament point of view. I was surprised they published Dr. Hasset-Walker’s article. The good doctor inserted a deft virus into the gun debate. She called for those in the reflexive anti-gun culture to educate themselves. She called for them to reach outside their comfort zone and consider the possibility that ownership of guns might have positive aspects.
People who have been in the gun culture for a while know the best way to convert someone from the other side is to take them shooting. It destroys their preconceptions.

People in the gun culture, however, are seldom converted to the other side. There views are nearly always held in opposition to the dominant culture in the media. They do not have to look up anti-gun videos on the Internets. They are constantly bombarded with them in the dominant media.
Education has a tremendous bias here. It is tremendously biased in favor of the gun culture. That is why anti-Second Amendment types work so hard to keep gun education out of the schools. It is why they work so hard to shut down debate. It is why they are committed to emotional slogans instead of facts.

The demonization of the Gun Owners is not just hateful advertising: it is a crafted strategy to scare regular and even anti gun folks into not taking the chance to know us. 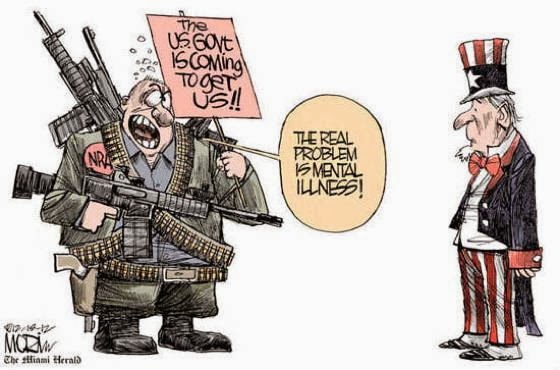 Don’t you think that Miami Herald’s Jim Morin is not very damn aware that in a county with a population of almost 70% minorities, a good representation of an NRA member would be a Hispanic rather than a White guy always foaming at the mouth and looking crazy? He knows, but it would defeat the Narrative that NRA members all White racist that want to lynch Brown and Black people.  But if he can convince one person not to accept an invitation from a Gun Person to go to the range, his side wins.

I know you are tired of seeing this but I will keep repeating it:

If your cause is righteous, why lie?

One thought on “This is why lying and refuse to really discuss issues are important for the Opposition.”