Tree of Life shooting – a ramble

I heard about the Pittsburgh Tree of Life Synagogue shooting on Saturday morning like most of the rest of the country.

I expected that there were probably a few readers who wondered why I didn’t post on it right away.  The more I read the angrier I got and it’s taken me a while to put some thoughts together enough to put pen to page, or more accurately fingers to keyboard.

I’m sorry for the stream of conscious ramble that this post probably is, but it’s the best I can do for now.

To start with, Friday was awesome.  My employer was a partial sponsor for a charity sporting clays shoot.  I put my name in the hat for people who wanted to go and got drawn.  So I got half a day of work on Friday and got so spend Friday afternoon shooting a round of sporting clays on the company’s dime.

It was cold and rainy, but a bad day of shooting is still better than a good day at work, and a free round of sporting clays from your employer is better than both.

After shooting, I met my wife and we went to Synagogue.

I was still dressed from the shoot,  I was wearing nylon front camo pants, the kind you buy from Orvis for a pheasant hunt (they look classy) and a shirt emblazoned with gun and ammo company logos.  I did wash the mud off my boots.

As you can imagine, conversations were… awkward.  Here is this big bearded guy in Synagogue wearing camo pants and a gun shirt.

The “sermon” (I can’t think of a better word that readers would understand) at Sabbath services was pretty bad.  At least I thought so.  It was about how Jews shouldn’t “celebrate” Halloween – although we could participate in it – because we don’t need ghosts and goblins to scare us, there is enough history of real threats against the Jews that we don’t need the supernatural.

Then comes the news on Saturday and all I could say was “fuck.”  I guess the Rabbi was right, but I still didn’t like the sermon.

I started reading the news and everything about it, through to this morning, was blaming Trump.  Where much of the Jewish community talked about this, they blamed Trump.

What the fuck is that shit?  Seriously?

WashPost front page points at Trump in both of the weeks terror attacks. pic.twitter.com/UmoAkmPsvQ

“Ryan called the attacks anti-Semitic, said the nation ’will not tolerate this bigotry.’ Yet Ryan’s own Super PAC has been accused of airing campaign ads that have targeted Democrats in racially coded language” https://t.co/TCPCWKu4Uh

These are just some examples.

Trump’s Jewish daughter, Ivanka, Tweeted her condemnation of the attacks.

America is stronger than the acts of a depraved bigot and anti-semite.

All good Americans stand with the Jewish people to oppose acts of terror & share the horror, disgust & outrage over the massacre in Pittsburgh.
We must unite against hatred & evil.

Go into the responses in her Tweet (it’s a live link) to see just how much people blame her and her father for this shooting.

Everything everywhere was “coded language” and “anti-Semitic dog whistles.”

From the President who was done more for Israel than any other and is the only one with a Jewish child, son-in-law, and grandchildren.  Especially considering the criticism that he has given his Jewish daughter and her Jewish husband more influence in the White House than any other Presidential family member, with the exception of the Bill Clinton and Hillary.

This has pissed me off to no end.  I don’t believe this is Trump’s fault.  More than that, it is misdirection that makes people ignore reality.

Anti-Semitism is often called “the oldest prejudice.”  I don’t think that’s true, there is prejudice much older than the Jews, but it does date back some 6,000 years.  I has never gone away, and I don’t think it will ever go away completely.  Focusing all this on Trump deliberately ignores the totality of anti-Semitism in the world and the threat it causes.

Nobody blamed Bill Clinton when some Jew hating asshole shot up a JCC in Los Angeles in 1999.  The major Left leaning media networks ignored a Muslim immigrant cab driver beating an elderly Jewish man on the streets of New York City, probably because they couldn’t tie it to Trump.  I have heard nary a peep from these same media outlets about how anti-Semitic attacks on college campuses have gone up 89% in recent years and the fact that it is exclusively Left wing, pro-Palestinian, Social Justice that motivates it.

Jews are being stabbed all over Europe, synagogues are being set on fire, anti-Semitism is nearing Germany in the 1930’s heights, there is not future for the Jews in Europe, and it’s almost all coming from Muslim Migrants.  But that can’t be blamed on Trump either, so… crickets.

Al Sharpton was directly responsible for the Crown Heights Riots and the Freddy’s Fashion Mart Massacre saying “If Jews want to get it on, tell them to pin their yarmulkes back and come over to my house.”  And he is a host on MSNBC.

Louis Farrakhan called Jews termites in a Tweet and all Twitter did was remove his blue check mark.

I’ve covered before the raging anti-Semitism that exist in Black Lives Matter and Antifa.

But one shooting and it’s all Trumps fault because he said “globalists.”

Bill Clinton presided over both the Ruby Ridge and Waco massacres.  Ruby Ridge is acknowledged as “the day the American militia movement was born.”  These actions were cited by Timothy McVeigh as justification for the Oklahoma City Bombing, but the media never ran with the message that it was Clinton’s fault.  McVeigh was a crazy, fanatical asshole, that was agreed upon.

The popular media is putting the blood of the 11 killed in Pittsburgh directly on Trump’s hands.  This is wrong and evil.

Acting as though Trump is the reason for this attack means ignoring all the other anti-Semitism that exists as well as suggesting that when Trump is no longer President, anti-Semitism will vanish.

People like Robert Bowers exist.  They always have and they always will.  Sometimes they do horrible things if we don’t stop them first.  I accept that reality.

All this means that the Jewish community will be so afflicted with TDS that they will be so focused on every truck with a MAGA bumper sticker they will not see the Antifa in a mask with a bike lock, pink hair transgender communist with a bat, or Muslim with a knife sneaking up behind them.

Then I see this shit from Vox, The Pittsburgh synagogue shooting is another example of America’s gun problem.  Great, since they already blamed Trump and they needed another article, why not blame the guns.  This isn’t even a new article.  It’s recycled from the last shooting.  It’s like a Mad Libs when you just insert the details from the latest shooting into the anti gun text.

Pittsburgh Mayor Bill Peduto told Chuck Todd during Meet the Press that he is a member of Mayors Against Illegal Guns and doesn’t think that armed guards are the answer.

What I’ve managed to find out about the shooter is that he has no criminal history, was not known to police, and had a carry permit.  He was not a prohibited person, so unless “universal background checks” include seeing what people post on Facebook and Twitter, none of the usual gun control arrangements would have prevented this any more than than the Las Vegas or Pulse Nightclub shooting.  Oh, and the shooter didn’t vote for or support Trump.

CNN posted a timeline of the shooting.

All 11 people killed were killed in the first four minutes all before the police arrived.

This is exactly the opposite scenario as Parkland.  The cops engaged as soon as they could and still people died.  It seems to me that the only way this could have been dealt with any faster is there was a cop in the atrium of the Synagogue, but we can’t have armed guards in houses of worship.  Gun control something something something it’s Trump’s fault.

My wife showed me what the Rabbi said about the shooting when interviewed by the local news.

Rabbi Berk emphasized how seriously his temple takes security and safety for those who work and worship there to try and prevent something like this from happening at his temple.

Temple B’Nai Sholom has multiple cameras around and inside the building, and a remote-controlled lock on the front door that Berk says is almost always locked.

Ooo… cameras to record the shooting, and a lock that won’t stop the shooter from coming in but will make it harder for the cops to enter when it is triggered AFTER the shooting starts.

Barry Pendergraft, a former lieutenant with the Huntsville Police Department, says an overwhelming amount of places of worship aren’t up to par on their security, but that’s where he comes in.

“Everybody should know how to defend themselves,” Pendergraft said.

Pendergraft specializes in showing churches and other places of worship how they can stay safe. One of the easiest ways to do that is making sure not just anyone can walk in the building.

“We should lock all the exterior doors and only have one way in once the service starts somebody needs to be at the door watching,” Pendergraft said.

Who gets door duty?  Well Fox News has a whole list of concealed carriers who have stopped church shootings.

But more guns are not the answer somehow.

It’s all Trump’s fault and more guns is not the answer.  That sounds like a really winning position to take that is guaranteed to save lives and whatnot.

I have a Synagogue gun. 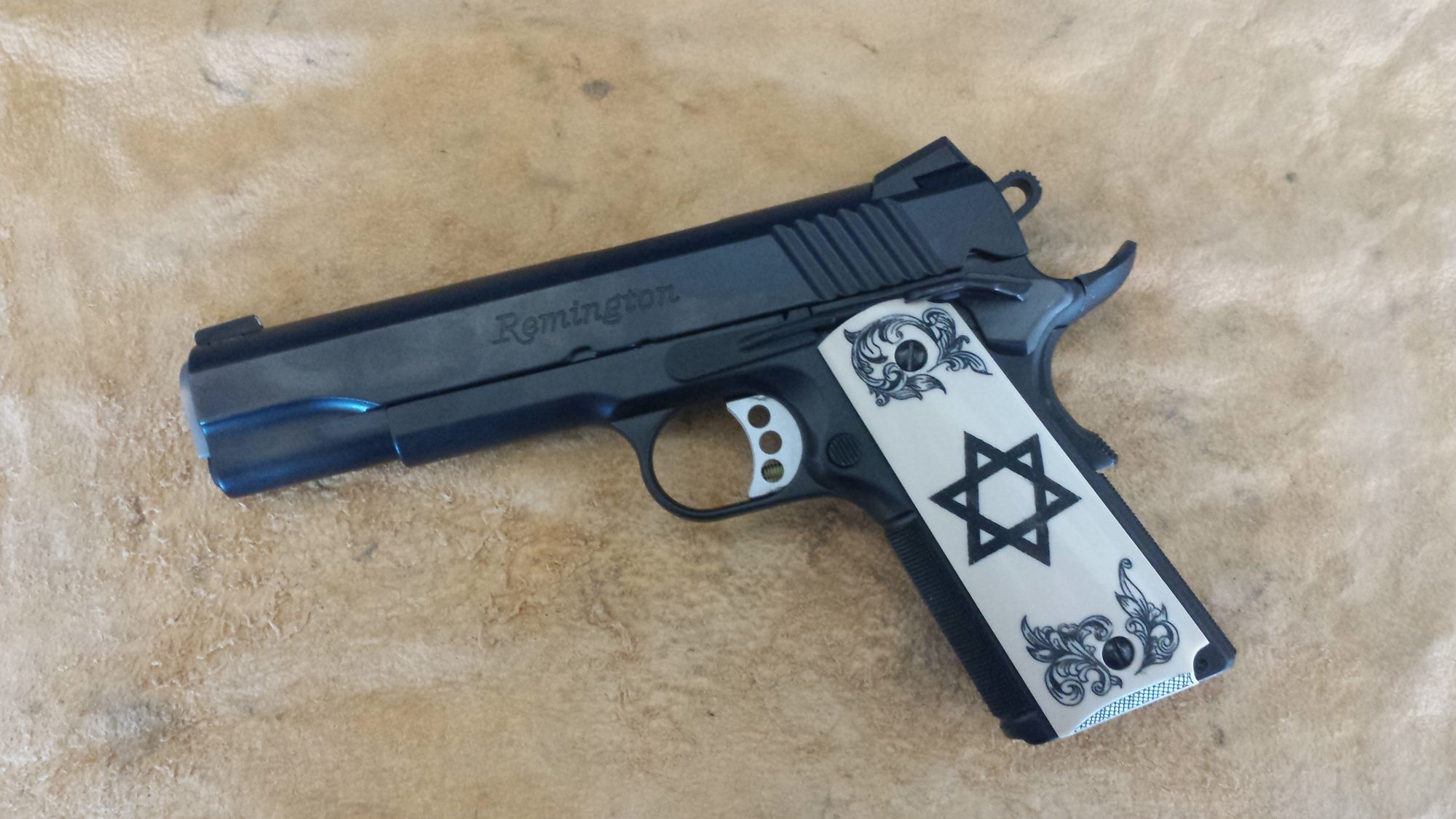 Do you know the great thing about having a whole bunch of 1911’s and living in an open carry state?

Every one is configured (trigger job, thumb safety, extended slide stop, sights) the same with only minor cosmetic differences between them, and my carry holsters ride in the same position and cant as my competition rig for IDPA, USPSA, and Steel Challenge.

Getting the gun out of the holster, the safety off, and sights aligned on target is all muscle memory.  I only have to work on accuracy at speed.

I’m carrying at Synagogue.   I’m a gun nut.  I’m a gun nut because shit like this happens.  I’m not toning my opinion down for anyone anymore.

I couldn’t care less if my .45 makes you uncomfortable.  I have a feeling somebody else’s .223 to the guts is more uncomfortable.

3 thoughts on “Tree of Life shooting – a ramble”