Trees are why the Left wants to ban guns…

They know they can’t be trusted with them.

Joshua Tree National Park is named for the type of tree that grows exclusively in the Mojave desert of the United States, the Joshua Tree or Yucca brevifolia.

The trees in the park are protected.  During the shutdown, some assholes have gone in and damaged some of the trees.

According to the National Parks Traveler:

“There are about a dozen instances of extensive vehicle traffic off roads and in some cases into wilderness,” Smith replied when asked about the damage in the park. “We have two new roads that were created inside the park. We had destruction of government property with the cutting of chains and locks for people to access campgrounds. We’ve never seen this level of out-of-bounds camping. Every day use area was occupied every evening.

“Joshua trees were actually cut down in order to make new roads.”

“We had some pretty extensive four-wheel driving around the entire area to access probably our most significant tree in the park,” Smith said. “We have this hybrid live oak tree that is deciduous. It is one of our kind of iconic trees inside the park. People were driving to it and camping under it. Through the virgin desert to get to this location. That would probably be a quarter-mile or so around the rock formation that is there.”

Joshua Tree National Park is a climbers paradise and apparently many of the illegal roads were for climbers to get to more remote locations.  There was also some illegal four-wheeling in the park.

As someone who enjoys off-roading, this disgusts me.

There has been pretty much universal condemnation for the the individuals who have taken advantage of the reduced patrolling of the park to do damage.

These people should be investigated, found, prosecuted, and punished.

Then there are the wackos on the Left who want vigilante justice for the trees.

Barbara here is a Left wing economist who writes about evils of capitalism. 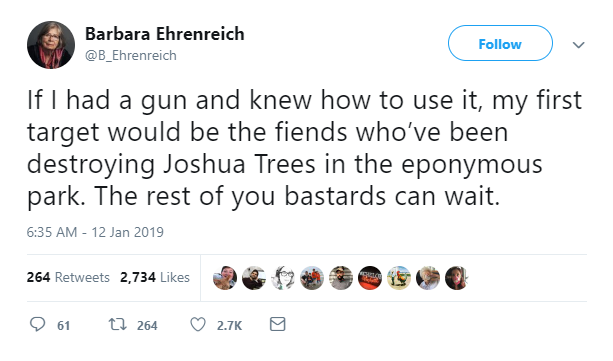 It’s a good thing that she doesn’t have a gun then.  Notice how she is prioritizing killing the people who cut down some trees.  Then she wants to kill the rest of us for… reasons, I guess.

This is clearly an unhinged woman who believes she can write all of what she sees as wrongs, by just shooting enough of the people she thinks are a problem.

Alone, that’s frightening, but her followers just pile on. 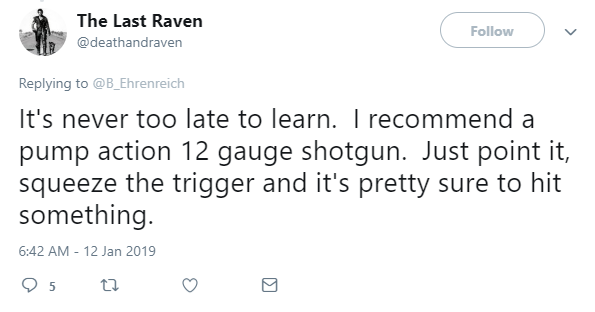 So these people believe it is morally justifiable to commit murder over some trees.

In the words of gamer and socialist, Tony Highwind, absolutely. 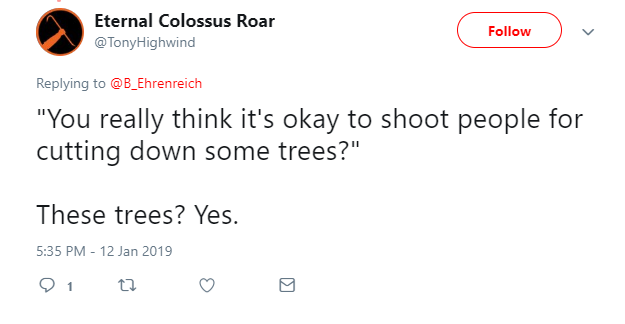 Nothing says socialism like putting people against a wall and shooting them.

This is why these people are so anti-gun so much of the time.  They know they can’t be trusted with guns, and they believe they are the good guys who are smarter and better than the rest of us, so clearly if they shouldn’t  have guns than the rest of us definitely shouldn’t.

I’m all for throwing people in prison for cutting down protected trees in a National Park.  Vigilante murder over trees is wrong.