I have finished my newest lightweight 20″ AR build. 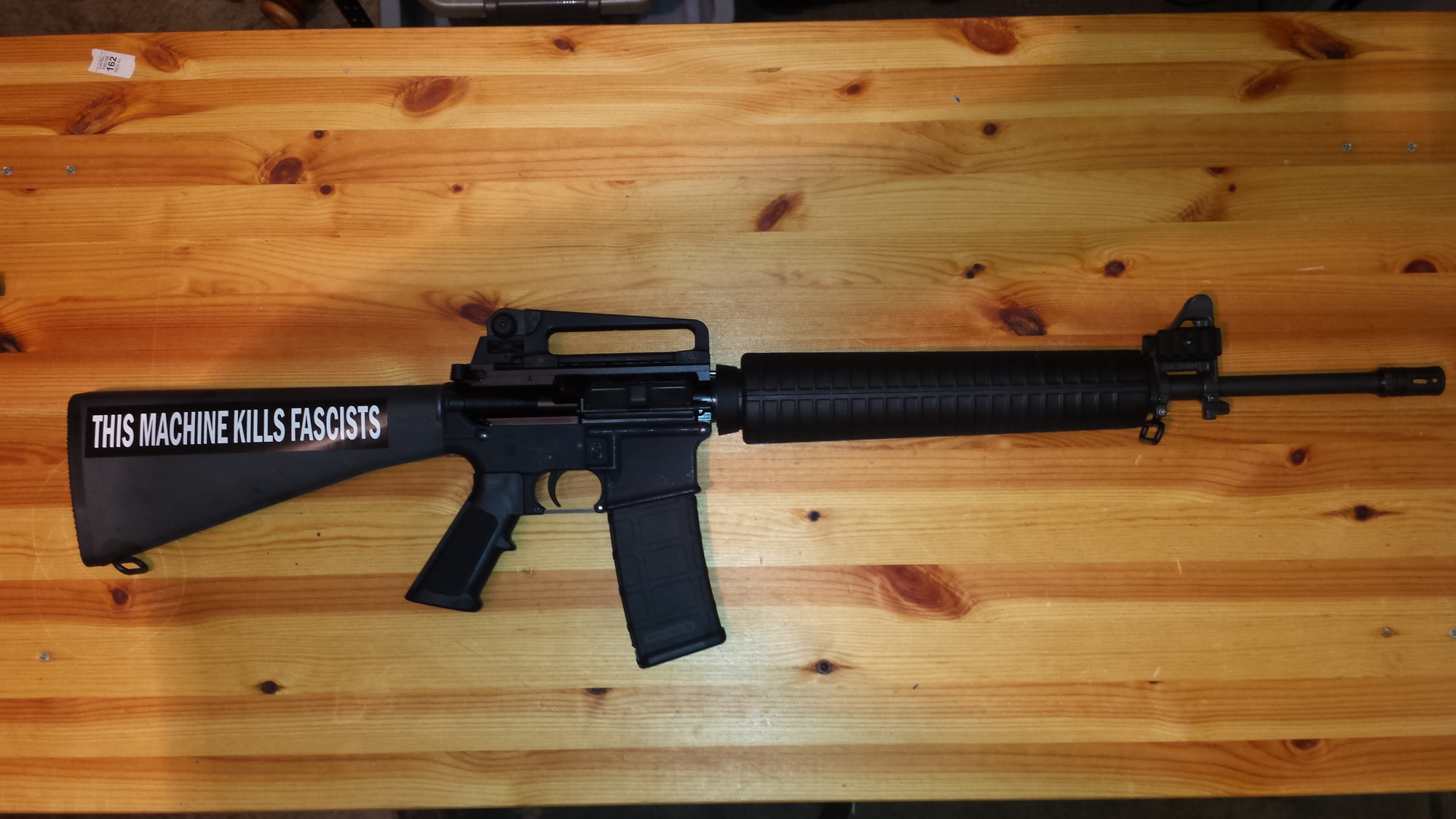 If you don’t recognize the text, it is an ironic tribute to Woody Guthrie, and the way this sentiment has been adopted in the popular culture.

Woody Guthrie was known for being anti-Fascist.  He wrote songs titled “All you Fascists Bound to Lose” and “Round and Round Hitler’s Grave.”  The thing of it is, I’m not sure Woody Guthrie had any idea what a Fascist really was.

In a letter to his daughter, Guthrie wrote “Maybe I could talk to you about fascism…  It is nothing in the world but greed for profit.”

A biographer of Woody Guthrie stated “Guthrie envisions the fascist threat as an economic threat in the first place, which endangers American society through the illegitimate enrichment of an elite through the exploitation of the working poor.”

Woody Guthrie’s opinions on fascism sound a lot like Bernie Sanders’ opinions on Wall Street.  There is nothing in it about totalitarianism, government oppression, or any of the other political hallmarks of actual, factual fascism.  Guthrie’s antidote to fascism was labor unions and a collectivized work force.

“There ain’t but two sides, the working people’s side and the big bosses’ side.”

Keep in mind that the original draft of “This land is your land” by Guthrie was critical of the concept of private property.

“There was a big high wall there that tried to stop me;
Sign was painted, it said private property;
But on the back side it didn’t say nothing;
This land was made for you and me.”

Guthrie’s long time friend and touring partner Pete Seeger said “You know, Woody was a Communist.”  A number of current pro-Communist and pro-Socialist writers have taken to touting Guthrie as a hero because of his folk status.  But don’t take their words for it, let Guthrie tell you himself what he believed.

“Every single human being is looking for a better way…when there shall be no want among you, because you’ll own everything in Common. When the Rich will give their goods unto the poor. I believe in this Way…This is the Christian Way and it is already on a big part of the earth and it will come. To own everything in Common, That’s what the Bible says. Common means all of us. This is pure old Commonism.”

Guthrie’s brand of fascism is of the “fascism is anything I don’t like” kind.

That’s how owners of private businesses became fascists, even though a state controlled economy was central to Italian Fascism and Nazism.

You see this today with SJW’s, BLM, Sanders supporters, and other leftists.  This is how conservatives who support limited government, gun rights, and economic freedoms are all fascists.  At least with these special snowflakes, they can claim the ignorance of being two generations removed from a time when fascists ruled countries.  Guthrie was in his prime during WWII, he should have known better.

So why would folksy socialist believe that a guitar kills fascists, for the same reason hippies believe that drum circles can fight the man.

History has shown us that political and economic freedom are intertwined.  It is impossible to control the economy wile allowing people to have other freedoms.

This is also the difference between the BLM/SJW’s and Bernie supporters.  You’re gonna get stomped on, it’s just a mater of how folksy the stomping will be.

In the spirit of honoring real history, I put Guthrie’s statement on the one thing that really did stop fascism.  A gun.