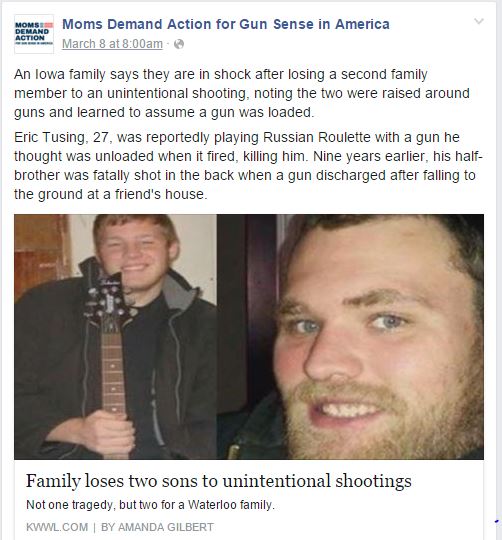 I know that you love to  martyr every person you can who has died from a gunshot wound.  Hacks gotta hack.  I get that.  I don’t want to make light of a family’s suffering, but this post of your is kind of beyond the pale.

“Eric Tusing, 27, was reportedly playing Russian Roulette with a gun he thought was unloaded when it fired, killing him.”

Really!?!  You are going to martyr as a “tragedy” a young man that played Russian Roulette?  You do know how that “game” is played, right?  What the point of it is?

This was a case of terminal stupidity.  Not and accident, not unintentional, just dumb.  There is no gun control that would have stopped this from happening.  If an adult is willing to point a gun at their head and pull the trigger… well… if the natural law of self preservation didn’t prevent this, there is no law of man that would have either.  Especially since the news article you cited said:

“They say the kids have always grown-up around guns and learned to always assume a gun was loaded.

So they still can not believe this happened. Last month they were told 27-year-old Eric Tusing was in Burlington, joking with friends about playing Russian Roulette.

That’s when he accidentally shot himself not knowing the gun was loaded.”

So this guy KNEW safe gun handling and did this anyway.

Let me redirect you to another article from a few years back that has just a little bit more integrity than this one.

When a guy about the same age ties a bunch of elastic cargo straps together and jumps off a bridge, that’s not a accident or a tragedy either.  There is no consumer protection legislation that would have stopped that.  You just can’t protect some people from themselves.

I feel bad for this family.  I can’t imagine the heart ache of having to bury two sons.  One son getting shot by a dropped gun feels dubious to me (drop testing is an industry standard, but maybe it was an old or defective gun), but at face value will accept that as accidental.  The son who shot himself playing Russian Roulette?  Do not, do not, do not, use his lethal idiocy to try and restrict my civil liberties.