Venezula’s gas prices: The Socialist Irony is so thick.

Almost 30 years ago, there was a social dislocation in Venezuela called El Caracazo. It was about a week of riots, looting and murder during the Presidency of Carlos Andres Perez and it was all about rising the price of the heavily subsidized liter of gasoline all of 25 cents or the equivalent of a tad more than  a quarter of an US penny. That led to the eventual impeachment of Perez and the rise of Hugo Chavez.

The riots were not a popular uprising as the Narrative have pushed, but very well crafted events by the Left. I learned many important lessons I have shares through the years here in this blog, but the most important thing about El Caracazo is that it was step one into what eventually led to what we are seeing happen in Venezuela today. Yes, the assholes are that patient, but then again most of those behind the first move are forgotten, in jail, left the country or died.

This is the price of liter of gasoline in  Venezuela: 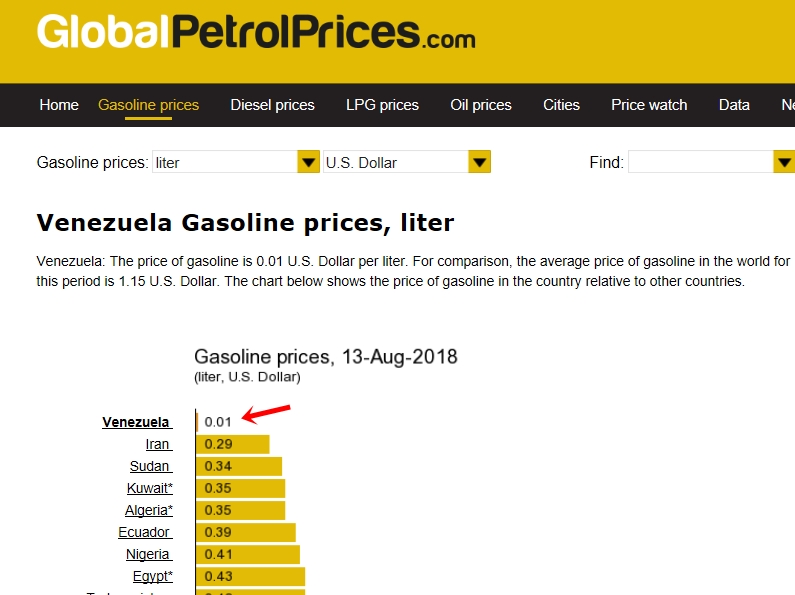 That would be $0.04 per gallon of very heavily subsidized gasoline in Venezuela. Back in the late 70s and early 80s, the warning was given that the prices were not even covering production prices and that it was draining resources unnecessarily. I remember somebody making the calculation that the country was losing $3 a minute because of the subsidies.

Now, I bring all this because an announcement the Maduro Regime made recently:

The excuse among many is that smuggling gas is big issue and unless you have the Party ID, you will be paying the “international price”:  $1.15 per liter or $4.35 the gallon. Of course the truth might be that since Venezuela’s refineries are in such disrepair, the government had to resort to import gasoline, Venezuela’s oil income is in the gutter, Maduro cannot longer afford to keep the bullshit up and reality has to come crashing down on almost everybody but a select few Party Members.

Venezuela is Paying the Piper a grossly overdue bill with interest and penalties.

One thought on “Venezula’s gas prices: The Socialist Irony is so thick.”