What is wrong with the other 8%?

92% of Americans think their basic rights are being threatened, new poll shows

Most Americans surveyed – 92% – think their rights are under siege, according to a poll released Monday.

Only 92%?  What is wrong with the other 8%?  Are they actively fascist or are they just to dumb to see what is going on?

Americans are most concerned that their freedom of speech (48%), right to bear arms (47%) and right to equal justice (41%) are at risk, says the Harris Poll/Purple Project, which surveyed 2,002 people nationwide.

“When you frame something as a threat, it creates a bit of a political response, and it creates division and encampments of special interest,” said John Gerzema, CEO of the Harris Poll. That’s why political parties and lobbying groups warn supporters with strident language, he said: It’s easier to drum up backing for a political cause by talking about an issue in terms of “threats.”

But when you start to consider which rights and freedoms really matter, Gerzema said, poll responses changed – and Americans re-prioritized which values they cared about most. 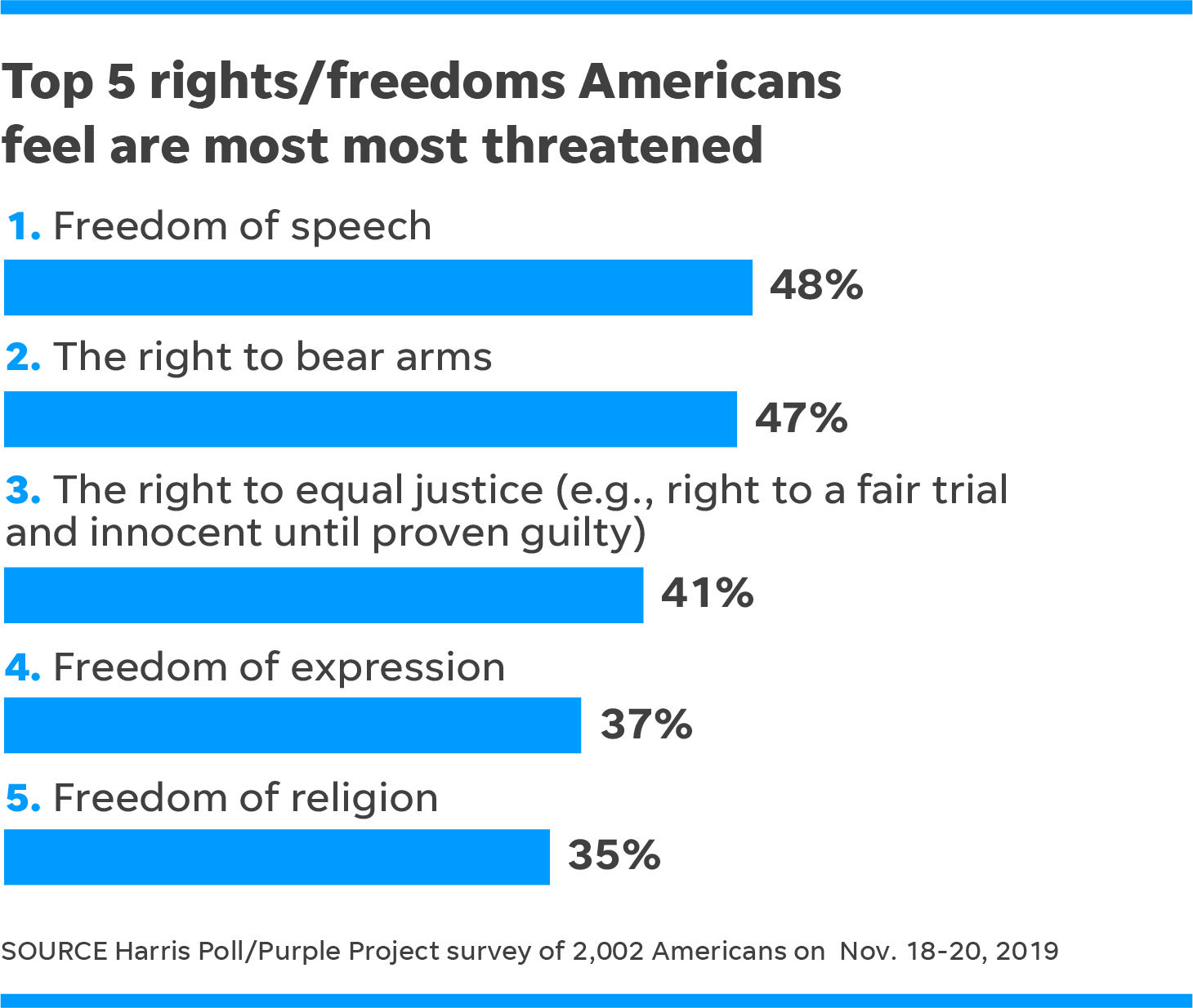 Let’s break this down:

1: The Left is the one pushing “hate speech” restrictions, cancel culture, and deplatforming.  They are the ones who want to punish people over using the wrong pronouns.  They are also the ones pushing social media to police language and politics.

2: The Left is the anti-gun side.  This is self-evident.

3: Can anybody say Kavanaugh, Smollett, or Covington Catholic?  Guilt or innocence has nothing to do with evidence and everything to do with asses privilege and political alignment.  Back in the day, it was the Democrats who supported Jim Crow, so they really have never been interested in justice.

5: Which side is the one that tries to destroy Christian small businesses for not wanting to make gender transition cakes, forces nuns to provide abortions in Catholic hospitals, and won’t let Catholics run adoption agencies if they won’t adopt to gay couples?

The Right has generally shifted more socially libertarian.  The pro-family arguments I see most frequently coming from the Right are driven more by good data, e.g., kids do better in school when raised by married couples, than by Evangelical moralizing.

It is the Left that has unequivocally become the party of strict ideological conformity, shutting down everything it disagrees with.

When asked what rights and freedoms Americans would miss if they were taken away – rather than which ones are threatened – poll respondents’ concerns generally ticked upward.

“When you look at the things we really value, what makes America so special is these core tenets of our Constitution,” Gerzema said. “I just find it interesting to note how much Americans really value this.”

The poll results come at a juncture in American politics where friction and division are more apparent – and Americans are overwhelmingly frustrated by the discourse. In fact, another recent survey, a Public Agenda/USA TODAY/Ipsos poll, shows that the divisive national debate over just about everything has convinced many that the country is heading in the wrong direction. More than nine of 10 in that poll said it’s crucial for the U.S. to try to reduce that divisiveness.

And that answers my question as to who are the 8% that don’t see our rights threatened.

I bet they are overwhelmingly the Radical Left on Twitter and inside the academic-media-activist complex that the Democrats listen to.

I wonder if those people were shut for one year, just how much most Democrats and Republicans would realize that there are in  fact very minor differences between the bulk of their beliefs and that the massive polarization of American politics is driven by the less than 10% of hysterical radicals on social media and key places of influence.