When teenagers try to dunk without knowing the law

When a teenager understands federal gun policy more than the NRA…

Here are the images: 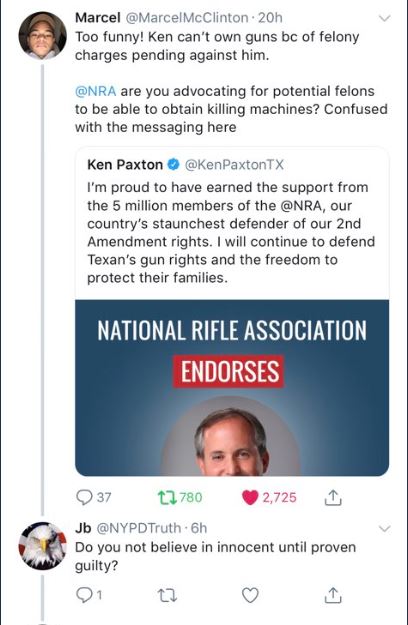 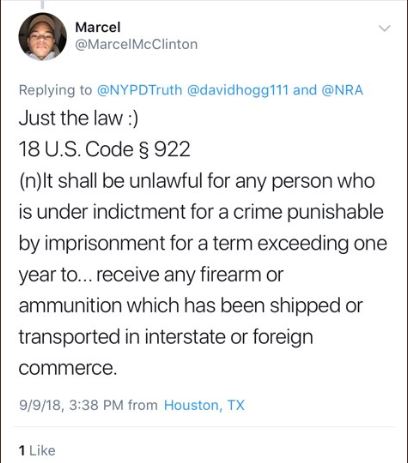 I don’t know anything about Ken Paxton.  A quick Google search says that he’s been indicted for fraud.

While Marcel here is correct that an indictment does stop you from being able to receive a gun from an FFL, he didn’t check the full definition of a prohibited person from the ATF.

The Gun Control Act (GCA), codified at 18 U.S.C. § 922(g), makes it unlawful for certain categories of persons to ship, transport, receive, or possess firearms or ammunition, to include any person:

who has been convicted of a misdemeanor crime of domestic violence.
The GCA at 18 U.S.C. § 992(n) also makes it unlawful for any person under indictment for a crime punishable by imprisonment for a term exceeding one year to ship, transport, or receive firearms or ammunition.

Being indicted for a felony does not make someone a prohibited person.  Paxton can continue, by Federal law, to own any guns he currently has.  He just can’t buy new ones.

Paxton cannot be stripped of of civil rights to own a gun without a conviction.  He is innocent until proven guilty and and indictment is not a conviction.

Hogg thought he was dunking on the NRA but really he was showing, again, how little he understands gun law and the fine details that are so important in its applications.