When you legalize crime, you get more of it

When you think of low crime, high quality of life places to live, do you think of radical Left-wing or Socialist nations?

Nevertheless, Leftists and Socialists in America seem to think they can help people by legalizing quality of life crimes.

About a month ago I wrote about Prop 47 in California.

Prop 47 is named the “Safe Neighborhoods and Schools Act” because who would want to vote against that.  But by making shoplifting up to $950 per offense a low-level misdemeanor, what has happened is the creation of an open-air stolen merchandise bazar that encourages shoplifting.

In a lighted garage on one of San Francisco’s busiest streets, a young man in baggy trousers and messy brown hair pulled down his pants. He had been hiding two pairs of stolen jeans with the tags still on them. He handed them to another man waiting nearby, took some money, pulled up his pants and headed back into another store on Market Street — home to the city’s high-end designers and big-chain retail shops.

The incident wasn’t a one-off. These brazen acts of petty theft and shoplifting are a dangerous and all-too-common consequence of Proposition 47, a referendum passed five years ago that critics say effectively gives shoplifters and addicts the green light to commit crimes as long as the merchandise they steal or the drugs they take are less than $950 in value. The decision to downgrade theft of property valued below the arbitrary figure from felony to misdemeanor, together with selective enforcement that focuses on more “serious” crimes, has resulted in thieves knowing they can brazenly shoplift and merchants knowing the police will not respond to their complaints, say critics.

Since Proposition 47 was passed, there has been an increase in theft across the state. Cities like San Francisco have seen organized crime rings turn shoplifting into a well-organized racket involving desperate thieves and unscrupulous black-market resellers.

Among the nation’s 20 largest cities, San Francisco now has the highest rate of property crime, which includes theft, shoplifting and vandalism.

Del Seymour, founder of the non-profit Code Tenderloin, told Fox News that fencers – often from Mexico and Guatemala – set up shop in the middle of the day and night around the city’s United Nations Plaza area. He said he’s also noticed that the stealers and dealers have gotten bolder by the day. The retail heists taking place, he said, aren’t some small-time operation but instead a sophisticated network of international dealers who cross the border to buy stolen goods. What’s worse is that a majority of the handoffs happen in view of San Francisco’s City Hall.

Self-defense and gun ownership have all but been banned in California.  The police will not deal with this brazen criminality, and major corporations generally have policies against allowing employees to stop shoplifters.

Combined, the hardest hit will be independent retailers and small store owners who will watch as their life savings heads out the door in the arms of criminals, and if one of these store owners tries to stop it they will get seriously hurt as the criminals know they have more protection than the business owner.

If you wonder how the Liberal Elite of California are dealing with this, look no further than the Opinion section of the Orange Country Register:

Fundamentally, Prop 47 was a long needed step in the right direction. Punishing petty thieves and drug possessors with felony convictions and the lifelong restrictions that accompany a felony record is a nonsensical, draconian approach that does little to keep the public safe while doing outsized harm to those punished with a felony conviction.

But since Proposition 47 was passed, opponents have attacked it as responsible for higher crime in the state. As I have explained far too many times, there is still no evidence beyond the anecdotes and campaign talking points of opponents of a link between Prop 47 and higher crime.

While the research initially indicated that small increases in larceny and vehicle thefts appeared in response to Prop 47, further testing of that link failed to establish a causal relationship. It ultimately concluded the initiative didn’t drive up property crimes either.

The people who live in gated communities with private security patrolling them are not worried and are not going to notice.  Since a Tiffany ring or Armani suit costs more than $950, the stores they shop at are not likely to get shoplifted.  It’s only the working class and middle-class places that will be robbed blind.

Now let us fly over middle America, where those knuckle draggers believe in antiquated ideas like enforcing the law and go to New York City.

“F–k this s–t!” screamed those among the hundreds who swarmed the Hoyt–Schermerhorn station in Downtown Brooklyn Friday night to protest the NYPD’s planned crackdown on fare evaders.

Footage of the scene posted to DailyMotion shows cops getting jeered by protesters, who belt out “F–k You!” as they flip off the Finest.

Look at the chaos of thousands of people hopping turnstiles because the police want to enforce the law and make people pay for a service they are using.  A service, by the way, that has a projected $42 Billion debt problem and which fare beaters cost $215 Million per year.

How dare the city make people pay for public transportation.

I have to say, my favorite part of that video started at about 7:30, where some poor girl with nothing but the best of intentions asked some of the protestors why they were jumping turnstiles and engaged in an “us versus them” with the police.  The response was a protester screaming in her face “you are not getting emotional labor.”  This seems to be the latest Social Justice trend that permits the aggrieved to be irrational cry-bullies because asking them to explain themselves is “unpaid emotional work.”

One protester, Sarah Autz, 25, was arrested for allegedly scrawling “PIGS” on a cop car, while another person got away with tagging “NYPD KKK” on a department vehicle, an Instagram stories post shows.

These incidents come a day after a Halloween night crowd mocked cops as they removed a pile of trash thrown on their car in Brownsville. 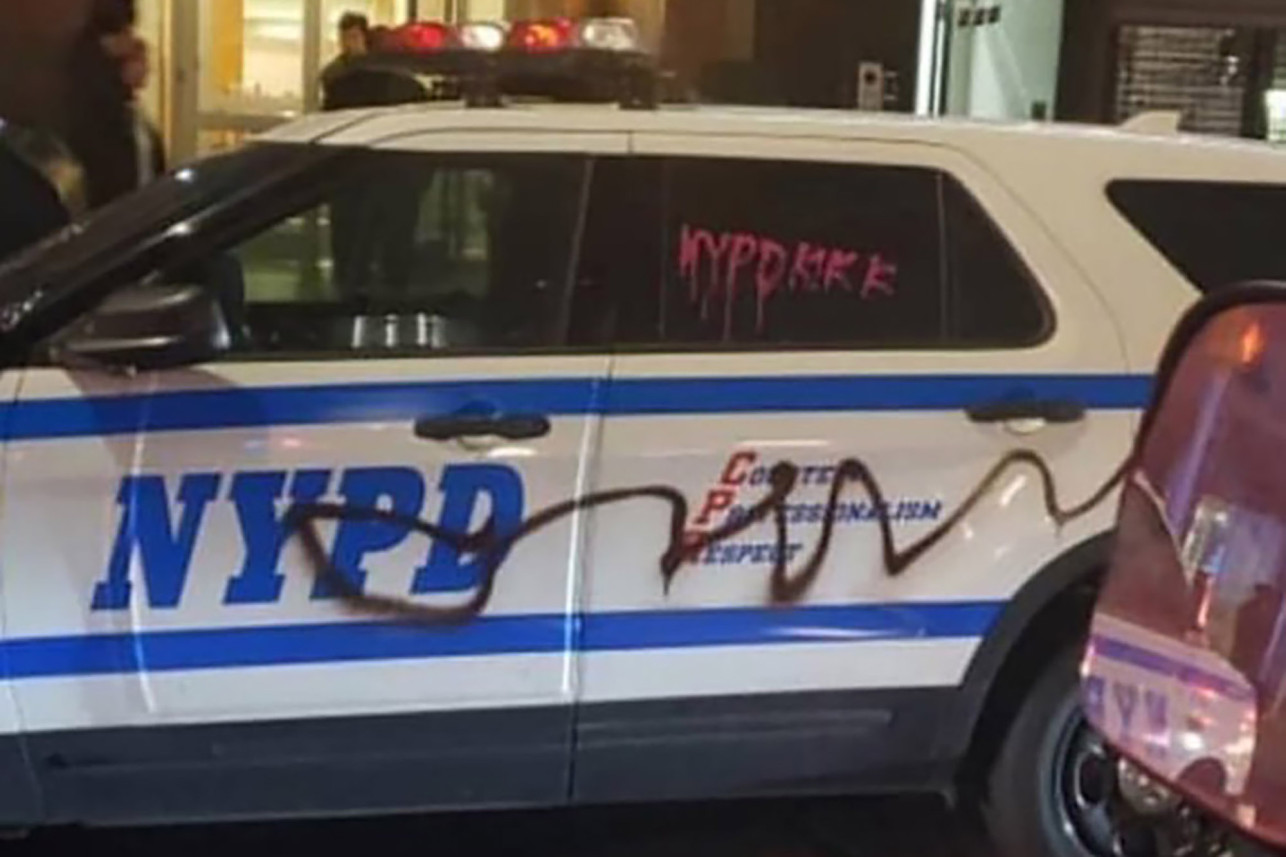 What is the result of this?

Only two people have been busted in connection with the chaotic, cop-hating protest that rocked Downtown Brooklyn — as New York’s Finest kept a low profile Saturday elsewhere in the borough where an angry mob treated them like trash.

Despite official vows of “additional resources” in the wake of the disgraceful treatment cops and their cruisers received in Brownsville Halloween night, uniformed officers near the dumping ground — East 95th Street and Clarkson Avenue — were hard to spot.

“Cops are hesitant — they’re second guessing themselves,” Sergeants Benevolent Association president Ed Mullins told The Post. “These anti-police protests are growing,” he said, but “cops don’t want to engage. Because they fear that if it goes bad, the NYPD is not going to back them.”

The raucous crowd threw trash, boxes and eggs at a patrol car — and then taunted arriving cops, “Trick or treat, motherf—rs!”

No arrests had been made in connection with that vandalism by evening.

“What are they mad now? It’s not like somebody slashed their tires,” shrugged one passerby, who gave his name as “Jeffrey W.”

That’s a hell of a standard.  It’s all fun and games until tires get slashed.

I guess I’m one of these conservative philistines who thinks the standards should be no vandalism whatsoever.

And why do the police back down and why are the radical people of NYC engage in this sort of mob violent insanity?

Because the Leftist leaders of the area encourage it.

Ending mass incarceration means challenging a system that jails the poor to free the rich.

Arresting people who can’t afford a $2.75 fare makes no one safer and destabilizes our community.

New Yorkers know that, they’re not having it, and they’re standing up for each other. https://t.co/asvidIe5zV

Because poor people can’t afford a $2.75 subway ride, it is perfectly fine for thousands of people to jump the turnstile, stealing hundreds of millions of dollars in services from the MTA and law-abiding people to pay their taxes and fairs, and when they get busted for breaking the law for others to vandalize police cars and attack cops.

This sounds exactly like the way to create a stable, peaceful society.

Because some people can’t afford the subway, civil order has to be destroyed.

That’s a communist for you.  Not the “I like Swedish socialism” kind, but full-on Maoist kind.

Radical Leftism always leads to the destruction of society for decent, law-abiding, hard-working people, and it is happening in California and New York City before our very eyes.

4 thoughts on “When you legalize crime, you get more of it”