Where it is confirmed NYC is not the place for little children.

You have to remember this. I posted it just yesterday. 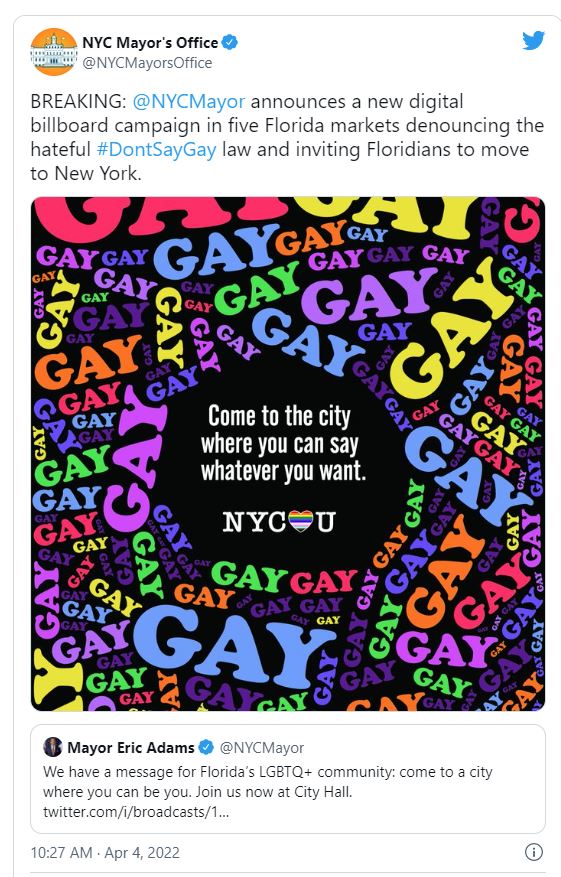 Our city fights for the LGBTQ+ community. We won’t let them be attacked — not here, not anywhere.

To all those living in fear of the hateful #DontSayGay laws: you’re welcome in New York City. pic.twitter.com/wZQbqDHBY3

Evil fascist DeSantis is making it hard for LGQBT+%$ etc. teachers to live in the Sunshine State so they are invited to NYC to practice their profession in the Big Apple. It is all in the spirit of openness and everybody is accepted in New York City!

That is unless you oppose the Mayor and remind him of promised he made “for the children” and then renegued. That will cause you to be fired from your job city government job almost immediately.

The Big Apple mom who crashed Mayor Eric Adams’ press conference Monday to blast him over his tot mask mandate was fired shortly afterward from her job at the city Law Department, The Post has learned.

Daniela Jampel, who served as an assistant corporation counsel, learned she was canned less than an hour after she confronted a caught-off-guard and apparently annoyed Adams over when he would “unmask our toddlers.”

Jampel had publicly challenged the mayor at an unrelated event on LGBTQ issues — as Adams stood in front of a podium banner that read, “Come to the city where you can say whatever you want.’’

“Three weeks ago, you told parents to trust you that you would unmask our toddlers,” Jampel told the mayor.

“You stood right here, and you said that the masks would come off April 4. That has not happened.”

It is a good thing New York City does not have the Death Penalty or she would have been taken to some alley and summarily executed for the heresy. There is still time for social services to drop by and her progeny removed from her custody for crimes against the dogma of the COVID Cult.

5 thoughts on “Where it is confirmed NYC is not the place for little children.”