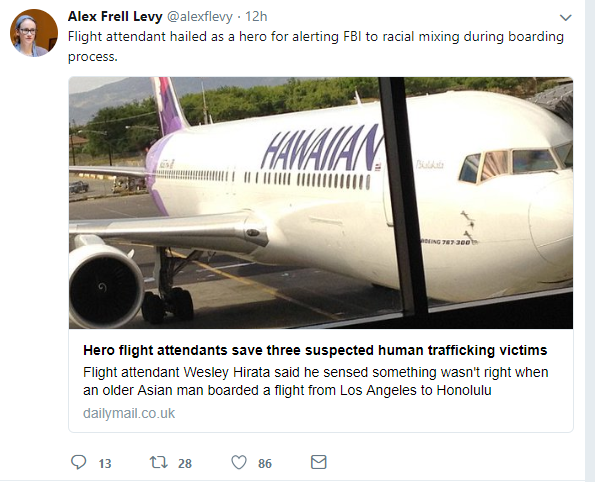 No way that is real.

What did the news say:

I thing that stuck out at me the most was the “all three girls had the same name on their boarding pass” part.  That seems like a big red flag or something.

I’ve never worked as a flight attendant, but I have worked security.  It doesn’t take long to develop a sense, where you notice people’s behavior and what signals they a giving off.  People can act suspiciously.  A kid trying to pocket a candy bar acts differently than a kid who is buying a snack.  I’ve seen it.

I’d assume that after handling tens of thousands of passengers in the post 9/11 era, flight attendants would develop the same sense for disruptive passengers, potential terrorists, people trafficking contraband, etc.

After the FBI investigated it turns out everything was legitimate, although I want to know what was up with the boarding pass name thing.

But Ms. Levy doubled down. 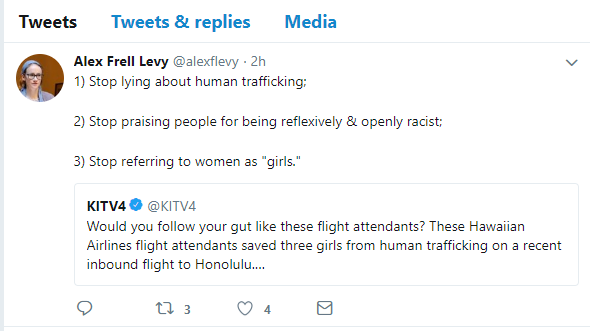 See, in her world, the only way to know if something is off is to be a racist.  This is why people like her hate police profiling.  It’s not that a cop learns to see the signs someone might be carrying an illegal gun or doing something illicit.  The only thing they notice is race.

This is the opposite of situational awareness.

Welcome to Woke, where it’s better to allow children to be kidnapped and raped than to show any signs of racism.

I wonder what a person like this does when a man on a hot day wearing an overcoat yells “Allahu Akbar?”