The necessity of being woke makes you do stupid things. A good example is Historic Photographs postin the Boof of Feces: 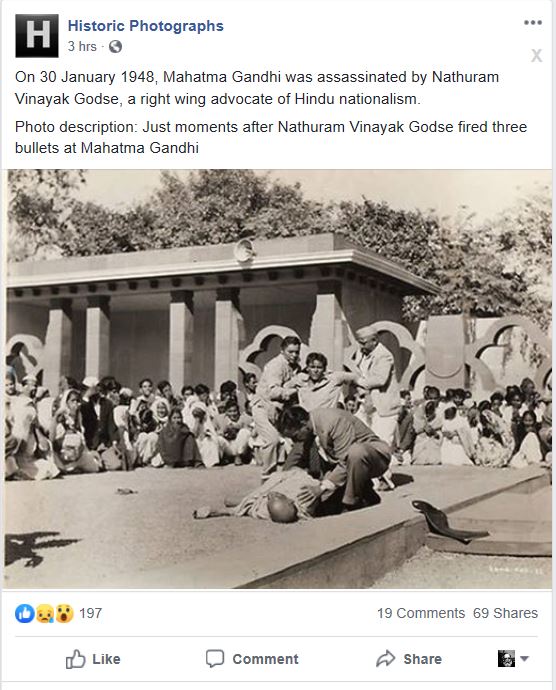 Nathuram Godse was not a Right Wing White Supremacist like the idiots from HP try to portray him but a Hindu who saw the splitting of India to create Pakistan as treason. In fact there is no Pakistan till 14 August 1947, less than a year before the creation of the State of Israel. Interesting the double standard on how to treat modernly-created countries, no?  That would actually make Nathuram Godse a Hindu version of a Palestinian sympathyzer. If the Partition of India was not bad enough, the relocation of some 12 million people leaving in its wake a million dead by means of force, may have something to do with inflaming the altready hot  emotions about the creation of Pakistan and the hate against Gandhi.  We are told the Non-Violence Movement was mostly a success, but we are never told what happened after the Union Jack was loweded. The years of political confussion and wholesale genocide and millions of refugees are never mentioned.

But if the above is not bad enough, remember that the name of this page is Historic Photographs. Which brings us to the choice of the day you see above: A very nice, very impacting capture of the deaths of the Mahatma. Except that is a photographic still from the movie  ‘Nine Hours to Rama‘.

But hey! We Woke! Siorry if history needs to take one for the team.