Florida could shield whites from ‘discomfort’ of racist past

A bill pushed by Republican Florida Gov. Ron DeSantis that would prohibit public schools and private businesses from making white people feel “discomfort” when they teach students or train employees about discrimination in the nation’s past received its first approval Tuesday.

“This bill’s not for Blacks, this bill was not for any other race. This was directed to make whites not feel bad about what happened years ago,” said state Sen. Shevrin Jones, who is Black. “At no point did anyone say white people should be held responsible for what happened, but what I would ask my white counterparts is, are you an enabler of what happened or are you going to say we must talk about history?”

The AP doesn’t even tell you the name of the bill so you can go look at it yourself.

Vanity Fair has probably the worst headline on this bill:

Florida Advances Bill That Would Ban Making White People Feel Bad About Racism, and No, That’s Not a Joke

CCN’s headline is almost as bad:

Florida bill to shield people from feeling ‘discomfort’ over historic actions by their race, nationality or gender approved by Senate committee

This is all red meat for the white fragility crowd.

Ron DeSantis is a white supremacist who must censor free speech to keep delicate white people from having their feelings hurt.

Except thats not true. 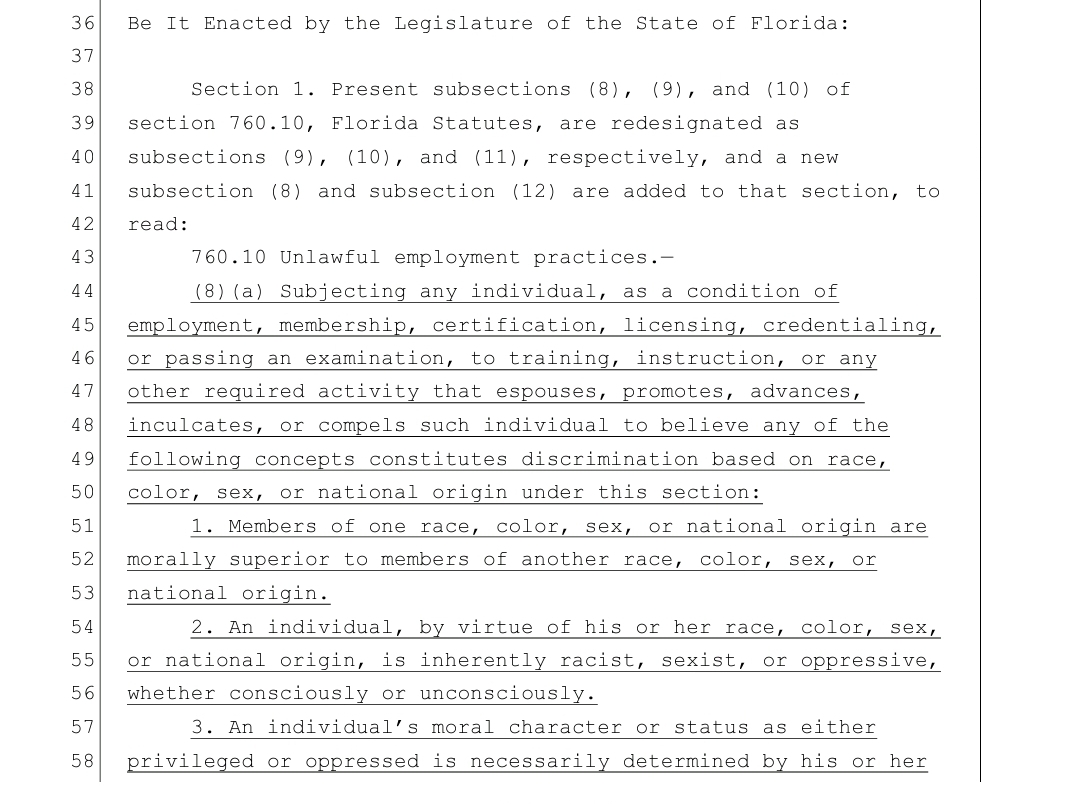 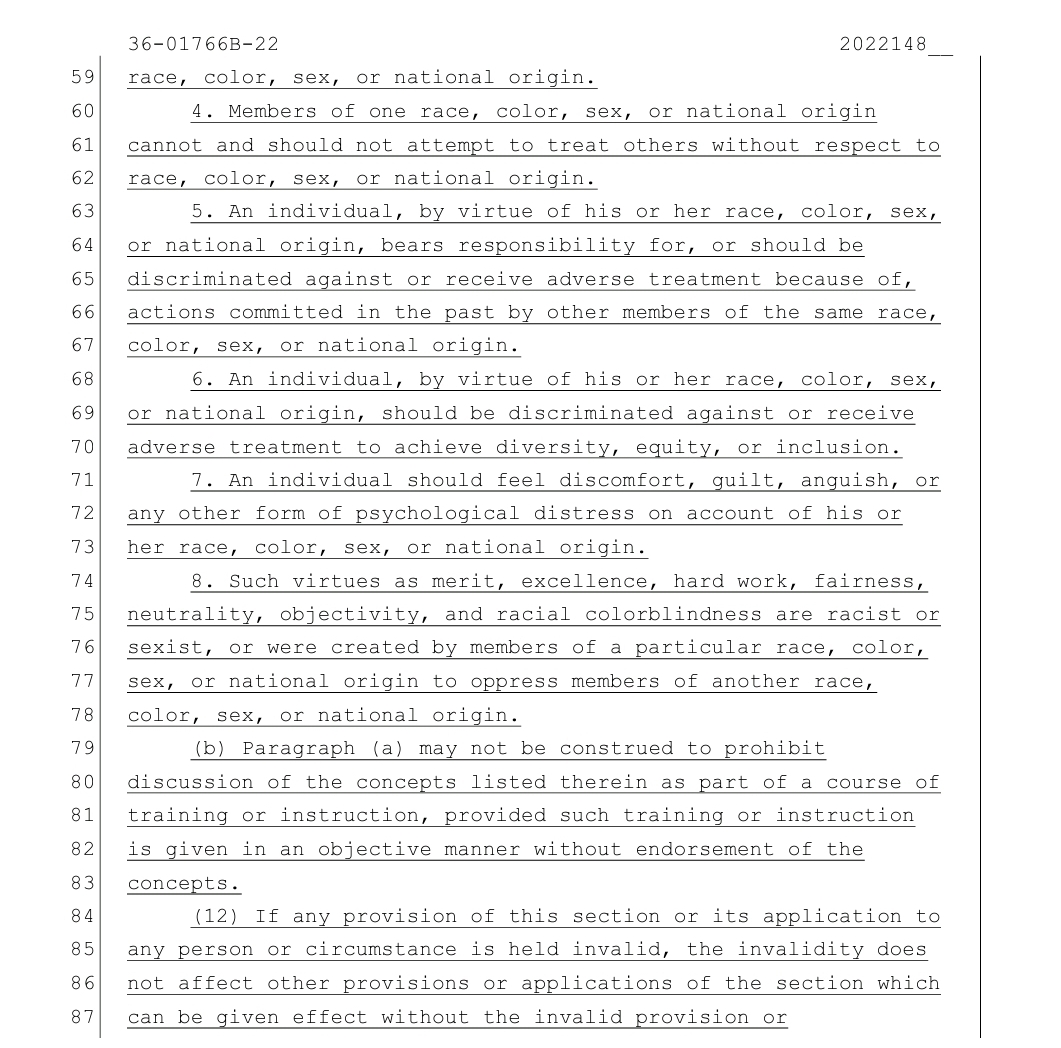 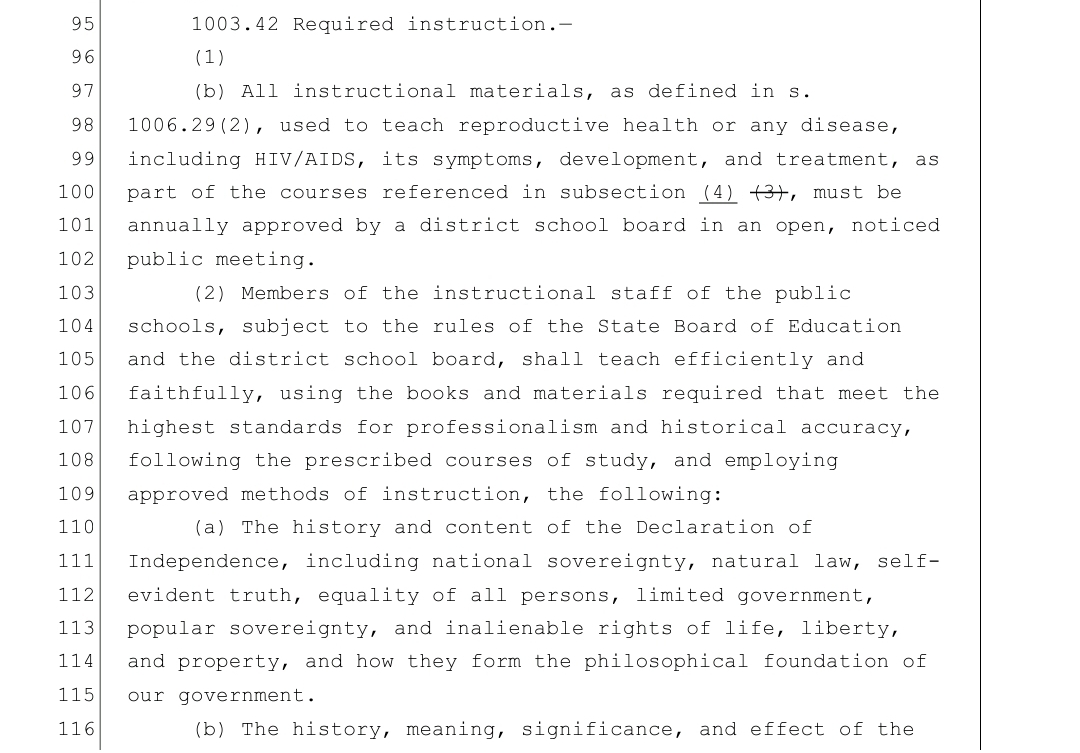 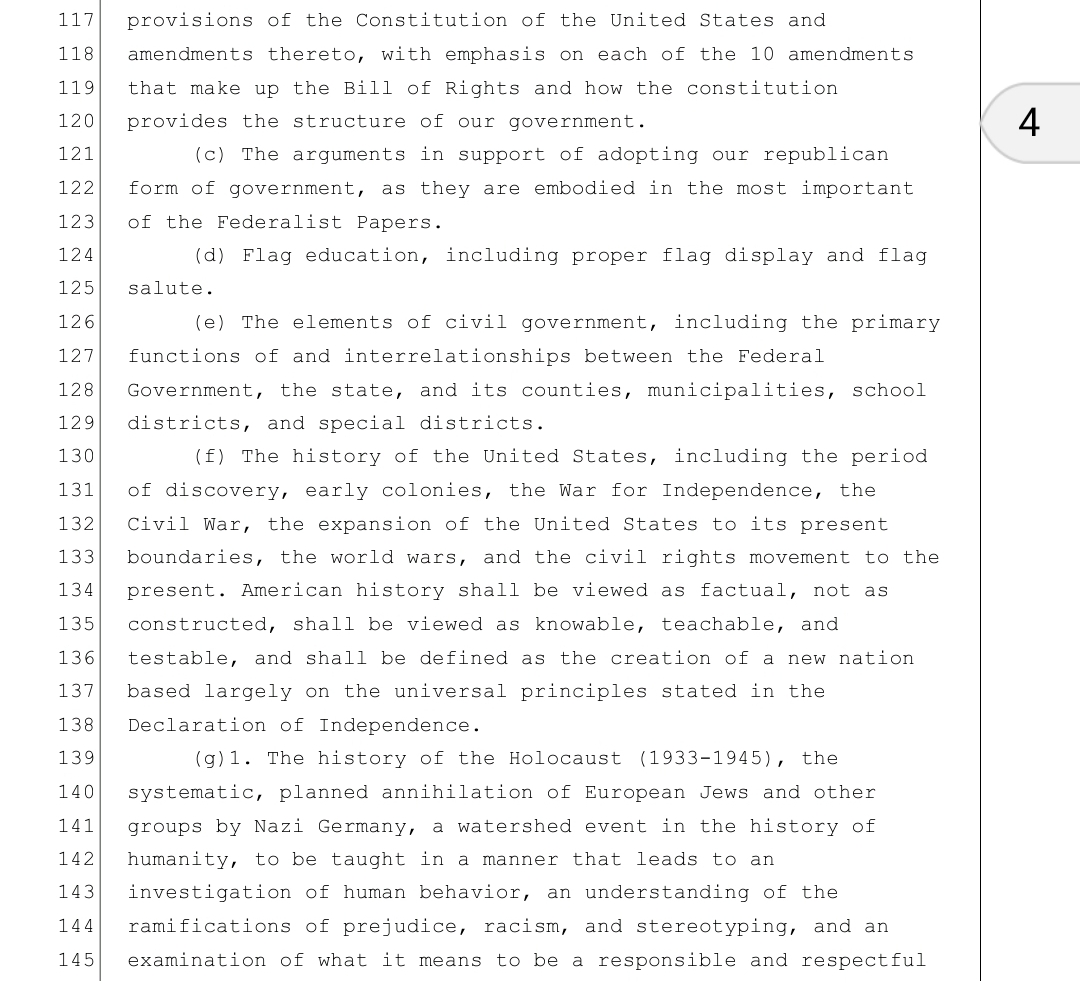 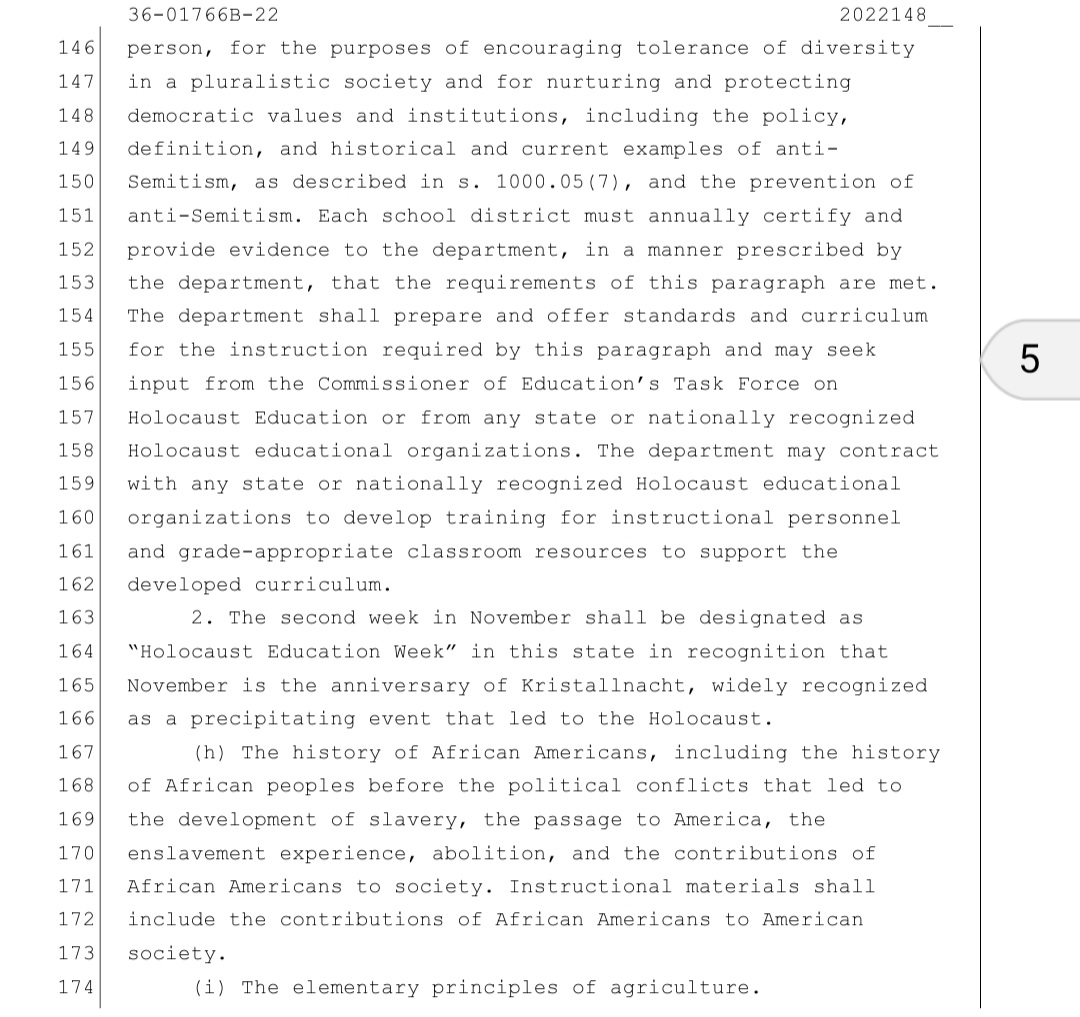 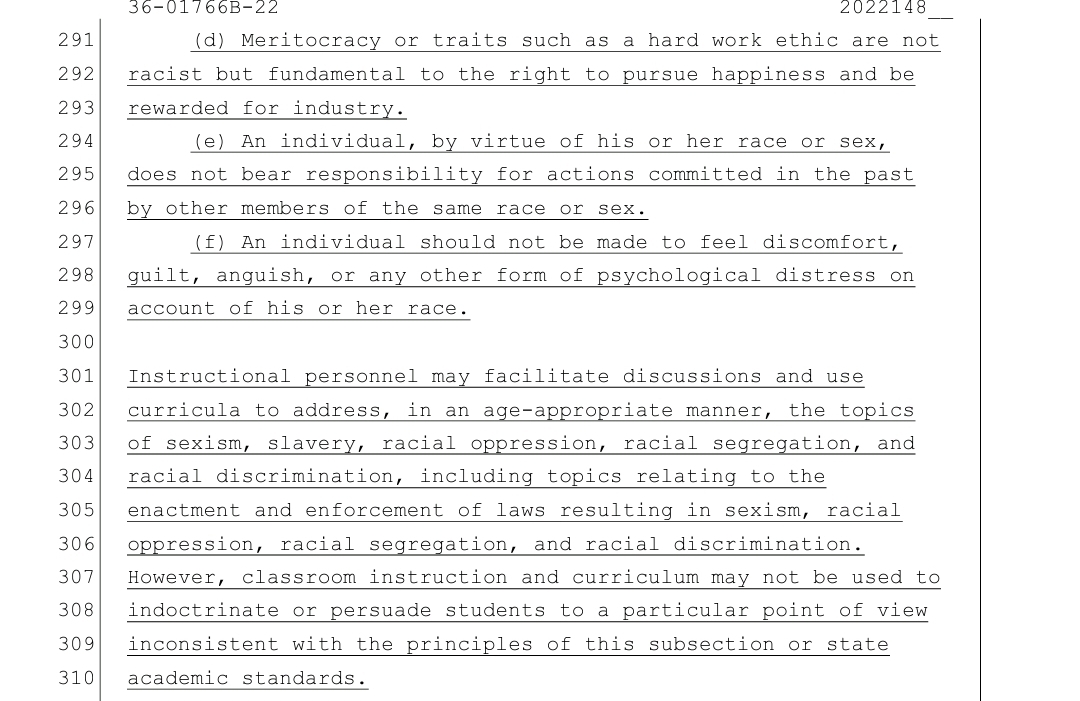 So the bill says aabsolutely nothing about not making white people uncomfortable.

It if fact says nothing at all about white people.

What it does say is that you cannot discriminate based on race, make people feel guilty about their race, or assign moral value to people because of their race.

The bill also explicitly requires teaching about slavery, the Civil Rights Movement, and the Holocaust.  It just cannot be done in a way that states or implies people living today bear and collective guilt for past atrocities they did not participate in because of their race.

All of this strikes right at the heart of what Critical Race Theory teaches, i.e., that white people today have a collective blood guilt for past grievances and should be forced to pay recompense because of it.

That’s why the media must slander this bill.

Any normal person who reads it, including traditional moderate Liberals, would have no objection to it and really wonder at the motives of those who did object to it.

What sort of monster doesn’t want to ban making people feel guilty because of their race?

The media can’t let people know what’s actually in the bill and they have to hang it like an Albatros  around the neck of Ron DeSantis because they are scared absolutely shitless of him.

You have the text of the bill now.

It is your duty to use it and counter the narrative whenever you see it on social media.

If you have normie friends who are aghast at what DeSantis is doing, show them the text of the bill and ask what’s so objectionable about it.

This bill needs to pass in Florida then the Republicans need to pass it again at the Federal level nationwide.