Justice Clarence Thomas asked a question during opening arguments in Voisine v United States.  This is the first question he has asked in court in over 10 years.

Voisine v United States is a case currently before the Supreme Court which ponders if a misdemeanor conviction of  “reckless” domestic violence is a prohibitive qualification under the Lautenberg Amendment.  Vosisine slapped his girlfriend while drunk, lost his right to own a gun, and then got arrested for being a prohibited person in possession of a firearm.  The argument for his side is, since he was drunk he lacked the mens rea to commit actual domestic violence and so his conviction should not have made him a prohibited person and he should not have lost his gun rights.

The bigger question is, will this case gut the Lautenberg Amendment?

Justice Thomas broke his silence to ask a very simple but deeply meaningful question: “Can you give me an area where a misdemeanor violation suspends a constitutional right?”

In the words of the great detective: “ruh-roh!”

The anti-gun left is already crapping its pants over this.  The Brady Campaign released a statement “No one convicted of domestic violence should have access to a gun – ever.”

Now we can all agree that Stephen Voisine is a piece of shit.  He slapped around a couple of girlfriends and shot a bad eagle.  But the classic argument for the First Amendment is “popular speech doesn’t need protecting, it’s unpopular speech that the 1A exists to protect.”  Soon we are going to find out if the Second Amendment also is there to protect “unpopular” people too.

Also… it seems that in the wake of Scalia’s passin, Justice Thomas is not the meat puppet that liberals accused him of being and he is a lot smarter than the lawyers at the Justice Department gave him credit for.

College Professor leaves Texas U. for “Gun Free” U. of Penn. 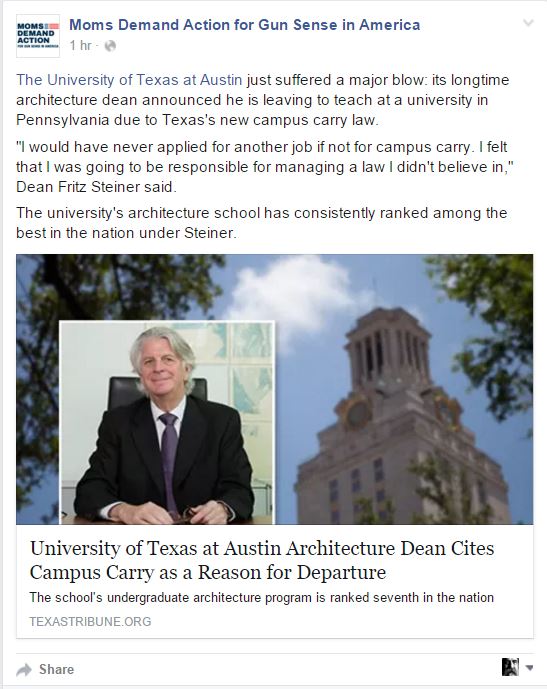 Fritz Steiner will take over as dean of University of Pennsylvania School of Design on July 1. The job offers an opportunity to join the Ivy League and return to the school where he earned three postgraduate degrees. But Steiner said he has turned down similar opportunities in the past, and probably would have done the same if people weren’t going to be allowed to carry guns in classrooms and other places on the UT-Austin campus next school year. “I would have never applied for another job if not for campus carry,” he said in an interview. “I felt that I was going to be responsible for managing a law I didn’t believe in.”

And he is being celebrated up and down the Anti Gun circles as a stand up guy.

Nobody tell him that although U. Penn does have a policy against firearms, the state has no legal prohibition in its laws to carry on campus if you have a permit.

Dear African-Americans: Stop screwing the media pooch, you are hurting the Narrative! Take a look at these two events that happened just this past weekend: 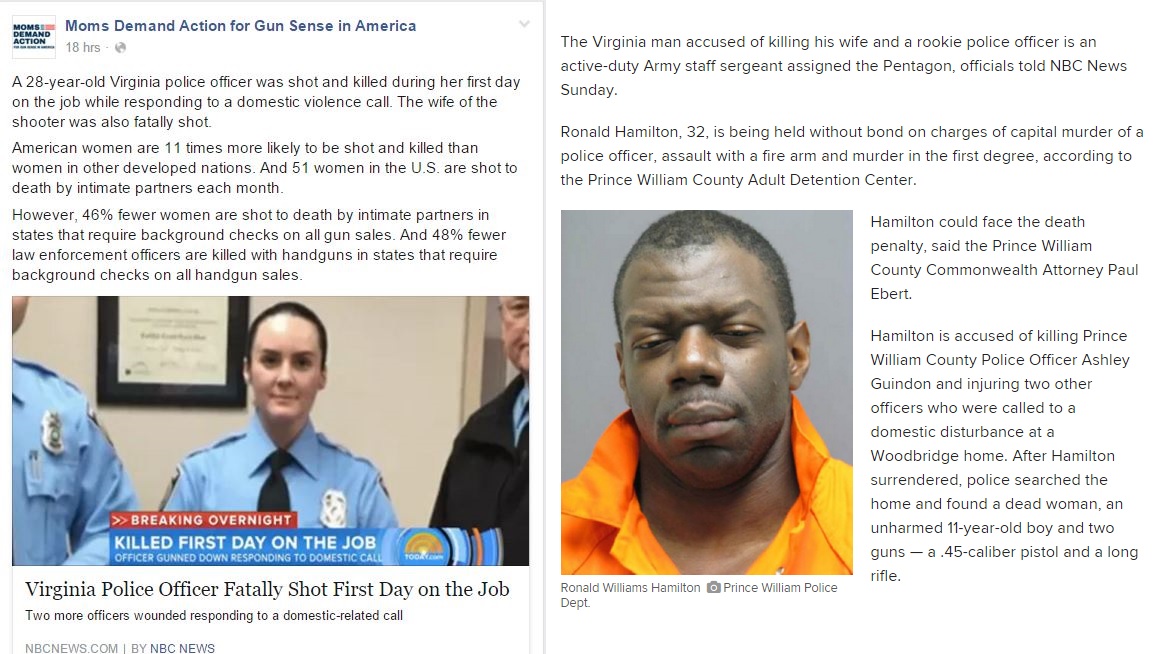 These two shootings were almost perfect! Good looking female rookie cop gunned down on her first day alongside two more cops and a woman. The other one a pastor gunned inside his own church! We are talking hundreds of hours of free TV advertising, gigabytes of social media and miles of printed words on papers gone to waste because the shooter was black! How dare you? Don’t you know by now mass killers are supposed to be white, redneck NRA and KKK members? You are fucking with the Narrative, damn it!

We are good at what we do. You cannot have a better example than George Zimmerman, the guy was half Hispanic and we managed not only to make people think he was 100% Blue-eyed white but dropped the subtle anti-semitic hint here and there. He probably knows more about maracas than menorahs, but that did not stop us, right? He is forever branded as racist worse than if he was one of the original raiders that burned down Rosewood.   But what we cannot do is change your skin color for the mugshots, OK? We don’t have access to the booking cameras and we cannot photoshop convincingly after the images are published.

It is partially our fault. When the Navy Yard shooter did his deed, we tried to bury it once we found out his race. Notice it dropped from the News media rotation rather fast. Then came the Vester Lee Williams and shooting two white folks on live TV (One of them a good-looking blonde that make for great visual victims according to Alfred Hitchcock)  that was too good to pass up, but eventually had to because again the wrong color.

And do not forget the herculean effort to keep any reference to race in the regular, every day killings in places like Chicago. When was the last time you heard in the news a good description of the shooter. one that included race? Years and years, right? From all you get in the Six O’Clock news , them kids playing in front of their houses were shot by Borgs or Romulans so vague is the description. That was done for a reason! Only the victim’s skin color is mentioned and it better be black! The narrative indicates that them White Supremacists from the NRA want to kill blacks! It is a genocide by insurrectionist terrorists that want to bring back slavery and the Rebel Flag!

So, here are the instructions: Don’t make newsworthy shootings. You can still kill each other but don’t do it at churches or malls or schools with more than two dead at one time.  Follow the example of Chicago where they are killing each other like it was the bubonic plague, but the shooters are colorless. Do not use assault weapons. Pistols with high-capacity clips are OK as long as you leave them on the scene so we can demand a ban on those things. Be good victims, bleed a lot, take one for the team and above all:

DON’T FUCK WITH THE NARRATIVE.

PS: Stay away from bad influences like Reverend Ken Blanchard and Rick Ector.

PS2: We do have a bunch of merchandise to sell, from $60 hoodies to $18 string bracelets with a washer. Drop by and order now before they gather moss.

The Opposition wants a CDC Report about guns….not really.

This data point was an eye-opener for me:

They are pretty much even. I admit not paying much attention to the method before, but the Antis made it sound like it was basically all suicides by guns. My fault.

75 rounds of pistol ammunition found underneath house, nearby homes evacuated… no, I am not kidding you, 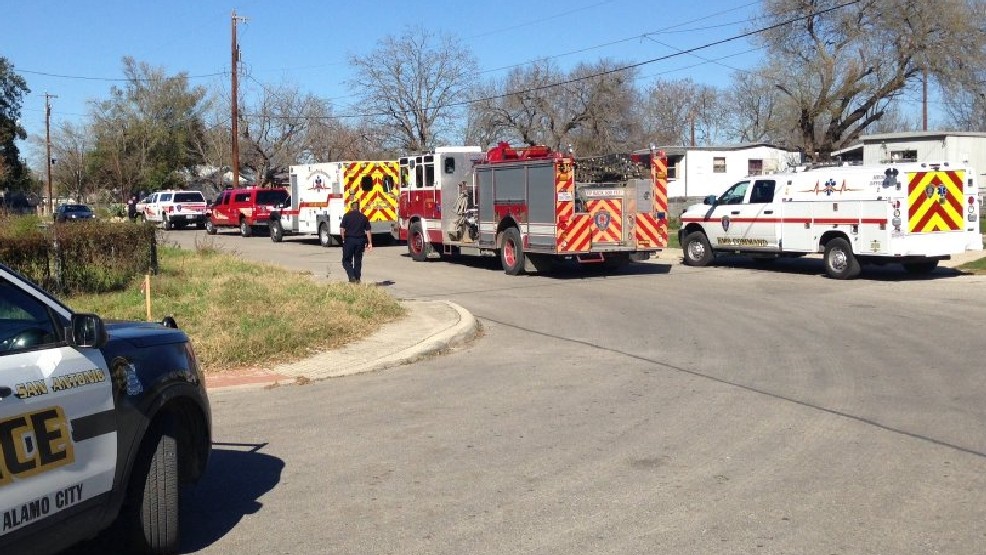 SAN ANTONIO – The San Antonio Police Department’s Bomb Squad was called to a Southwest Side neighborhood Saturday after dozens of rounds of ammunition were found underneath a home.The ammunition was discovered on the 7900 block of Dempsey Drive, near Old Pearsall Road and Southwest Military Drive, around 2:45 p.m. Saturday.

Capt. Troy Balcar of the San Antonio Fire Department said a family member found a sealed box with about 75 rounds of decades-old ammunition underneath the house. He said the rounds are .40 caliber and about 40 years old, based on a date written on the box. Half a dozen nearby homes were evacuated for about three hours.

“This is definitely a big danger, because they’ve been under there so long,” Balcar said. “They’ve rusted, they’ve been exposed to the weather, elements outside so we definitely want to get them disposed of as quickly as possible.”

Where do I even begin? That a Fire Chief would go on the record showing is ignorance about common ammunition or that somebody has a time machine and traveled back in time to deliver a box of .40 caliber ammunition 20 years before it was invented. 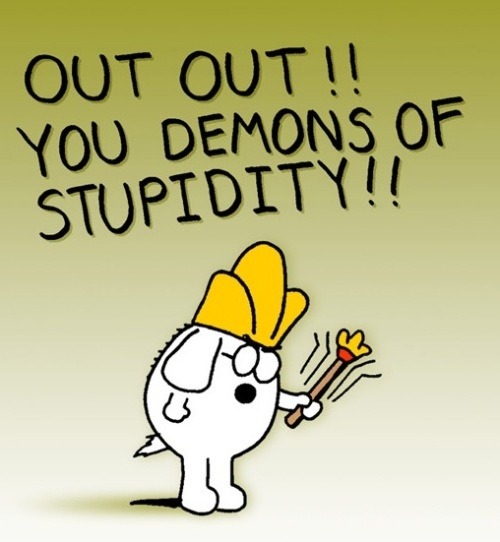 We glorify violence, drugs and stupidity but stand for Gun Control.

Patricia Arquette, Steve Carell, Bryan Cranston and others will add a specific piece of jewelry to their wardrobes for the night, as they promote a campaign against gun violence in the United States. “This awards season, the Brady Campaign to Prevent Gun Violence is teaming up with Hollywood to lift up the stories of the 90 Americans killed every day by gun violence,” a press release from the campaign states. “On the red carpet, high-profile celebrities … will join the effort to shed light on the human cost of gun violence by wearing unique, hand-crafted bracelets that commemorate Americans killed or injured by gun violence.”

So they get to wear a nylon string with a bronze washer and feel good about themselves! And you can get your own Elementary-School Art project for $18 at the Brady Campaign thrift shop.

Unfortunately for Brady et all, the few people who will be watching the Oscars will be more interested in seeing if Chris Rocks messes up or if some butt-hurt BlackLivesMatter activist streaks the stage in protest of  not having black actors get their own Oscar awards for not being part of a decent movie last year. 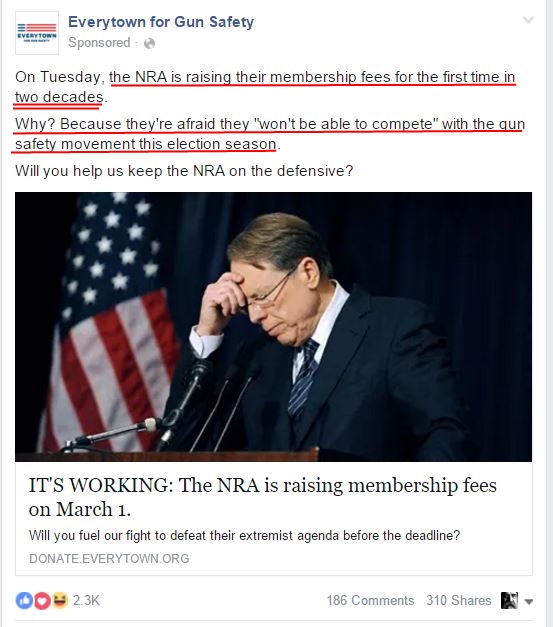 Think about it for a second: Two decades. I don’t think there is any organization or business so active that has not raised fees inn over two years, much less two decades.  And that was after lowering the membership fees for at least the past three years and the one year membership will be priced at a measly $40. And the kicker is not one cent of that membership money goes to political fights, just to run the other NRA affairs. The operating budget for the ILA and PVF comes from donations.

If anything and knowing the extensive non-political programs that the NRA have, I’d say they are running a very efficient “enterprise.”

And by the way, How many paid members does Everytown/Moms Demand have? One. The Nasty Little Fascist who keeps not getting a decent return for his multi-million dollar investments like in Virginia. How’s that Universal Reciprocity tasting just about now Mr. Bloomberg?

You gotta love them. It is so much fun to watch them cackle.