Last week I said that Code Pink is evil garbage.

Evil garbage doesn’t even begin to describe the depths of the banality.

The same stack of human filth co-director that blamed Israel for the Tree of Life Shooting went to Twitter to whitewash the genocidal machinations of the Iranian Mullahs.

Note: when Iranians chant “death to America,” “death to Israel,” they are not calling for the deaths of people but empire and imperialism. #CulturalCompetency

No, when the Iranians chant “Death to America” or “Death to Israel” the mean it.  That’s why they are the world’s leading sponsor of terror.

But this Tweet wasn’t what really pissed me off.  Code Pink being a political shit stain is par for the course.  It was a Tweet about some polling data that this woman posted that pushed me over the edge.

The American Jewish Committee commissioned the Survey of American Jews on Antisemitism in America.

American Jews are the most partisan stupid smart people on the planet.

Let’s look at the responses to actual questions:

I’d agree on that too.  Now let’s jump ahead to another relevant question. 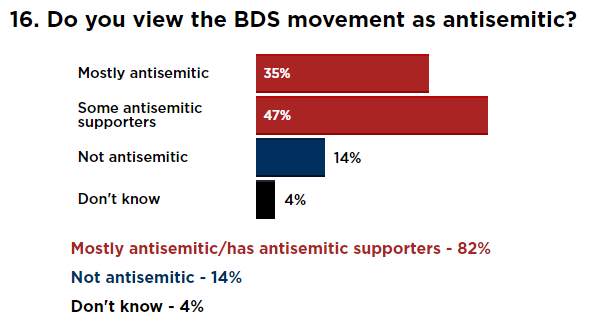 I’d absolutely agree with this.

Now, here is where this goes stupid. 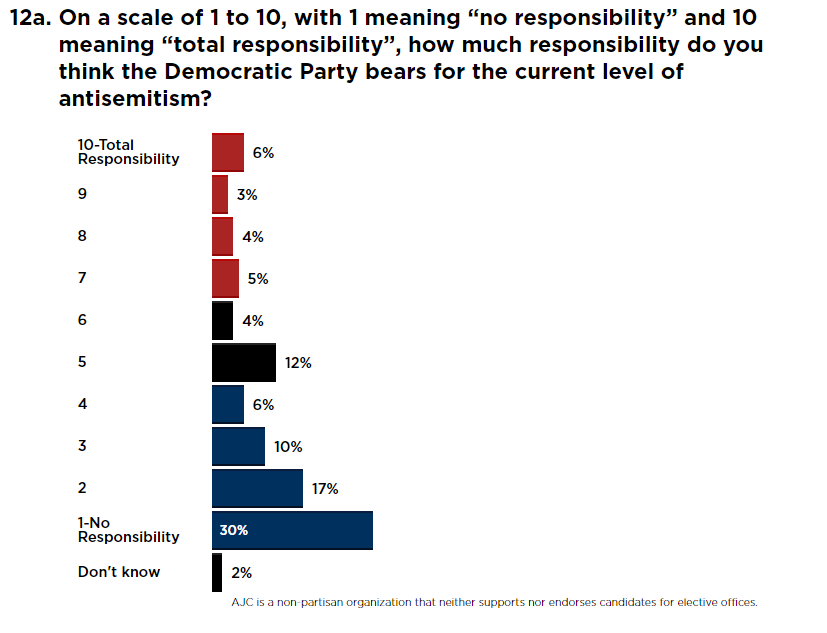 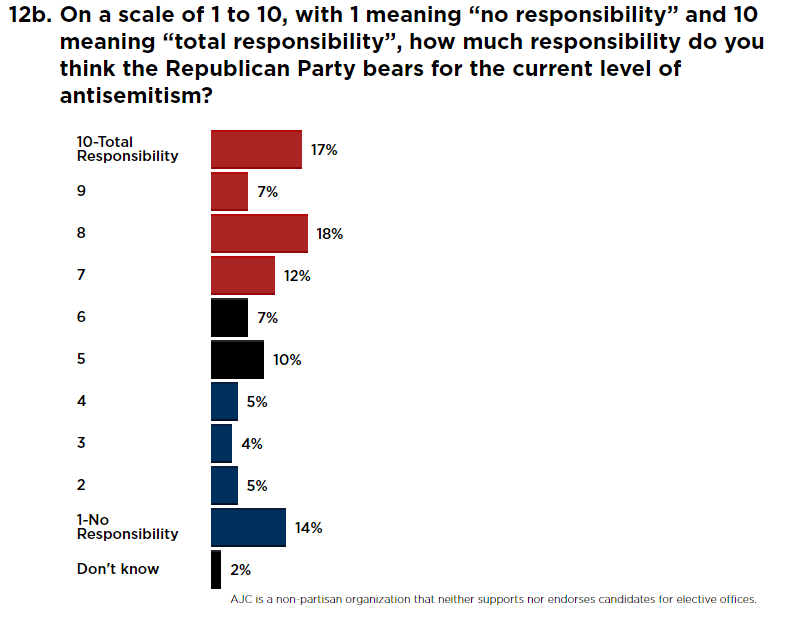 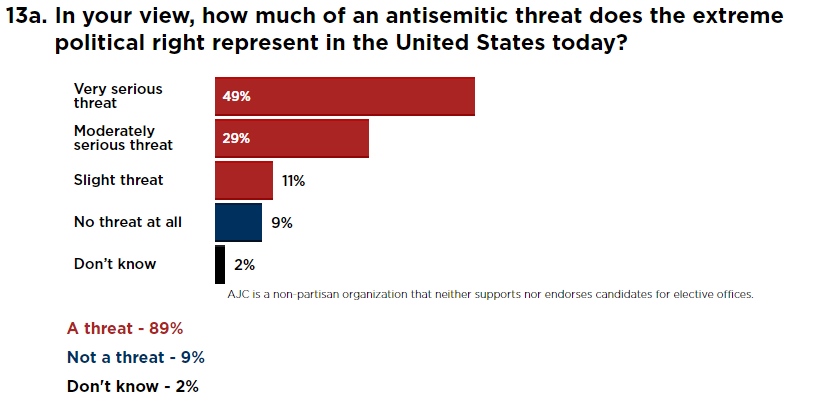 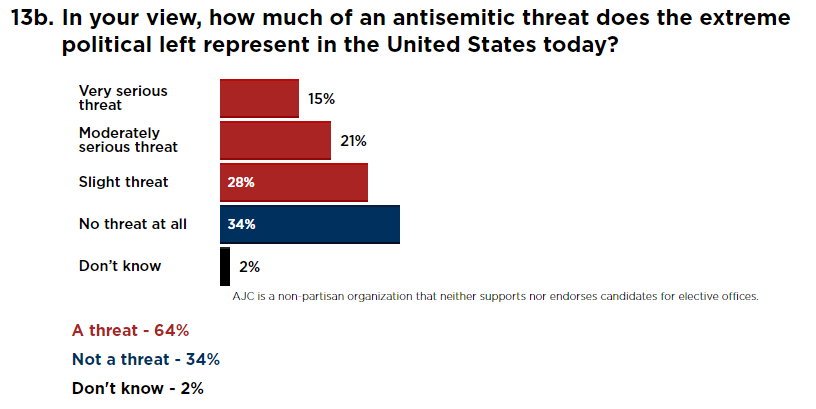 So BDS is viciously antisemitic and college campuses are at least as antisemitic as they were a year ago, if not more, and yet it is the Right and the Republicans who are reasonable for most of the antisemitism in the United States.

Because we all know that college campuses are hotbeds of Conservative activism and BDS is advocated for by the Republican party.

No… it’s Ilahn Omar and Rashida Tlaib that are the biggest advocates for BDS in Congress right now.

What could explain this? 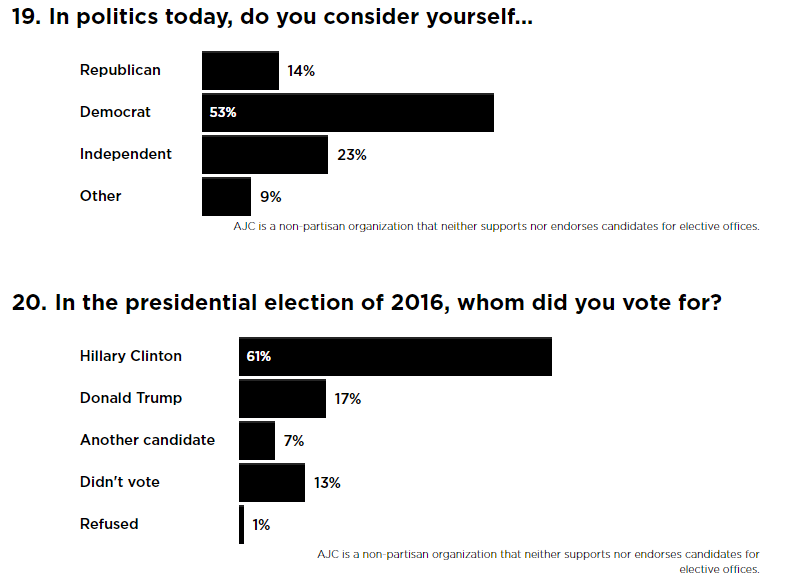 The majority of American Jews, it seems, are Democrats first and Jews second.  They think that being a Jew means not mixing milk and meat while campaigning for a Progressive Democrat.

Their partisanship has blinded them to reality.

They recognize Leftist antisemitism when they see it as antisemitism, but they can’t tie it to the Left or the Democrats.  They can’t see the antisemitic forest for the Jew-hating trees.

I bet it is going to come as a shock to all of these Jews that the leading Democrat candidate, Elizabeth Warren, wants to cut all aid to Israel if they continue to build houses but will not force the Palestinian Authority to stop putting money into the martyr’s fund.

It was Trump who cut $200 Million in aid to the PA over martyr’s fund payments.

I think that criticizing Israel for building homes while being silent about the Palestinians murdering children in their beds is antisemitic.  The Democrats seem to disagree.

If Warren isn’t enough, Bernie has made BDS part of his actual campaign and wants to redirect aid from Israel to the terrorists in Gaza.

We have chronicled how the Women’s March was not just led by antisemites but was conceived in antisemitism.

Remember it was Jewish women who were thrown out of the Dyke March and how Jewish Flags were banned from Pride Parades.

It was Ilhan Omar who made multiple antiseptic statements in person and on Twitter and it was the Democrat party that waffled on their condemnation.

Yes, there were two high profile attacks on Synagogues in the Trump era by white supremacists, but no Republican in office even remotely to condone that.  Not to mention that the alt-right has nothing to do with Conservatism at all.

The Democrats, on the other hand, are joined at the hip to antisemites.  Jew-haters like Al Sharpton and Louis Farrakhan are their kingmakers.

Antisemitism on the Right is a fringe element rejected by the party.

Antisemitism on the Left is part and parcel of who they are.

But American Jews are so beholden to the Democrats that, as the American Thinker put it:

As genocidal antisemitism takes over the Democrat party, I am absolutely convinced that the majority of American Jews will march into gas chambers while chanting Orange Man Bad because they are too blindingly partisan to see what is being done to them.