AOC gets one right (mostly), is backed up by Cruz, and her followers are idiots

I things I never thought I would see, Congresswoman Alexandria Ocasio-Cortez got one right.  Not just right as in “correct” but right as in she accidentally adopted a Republican idea.

Psst! 🗣 Birth control should be over-the-counter, pass it on.

Yes, yes it should.

This is not a new idea on the Right either, Republican Governor and Presidential candidate Bobby Jindal had this as part of his platform.

It made sense.  In all the fight over birth control under Obamacare and should nuns be forced to pay for it, some Republicans said: “fuck it, just make it OTC and then we don’t have to worry about it.”

This is one of those topics that unite Republicans and Libertarians.  The truth is that in the 60-year history of hormonal birth control, the drug has gotten better and safer and is on par for safety and efficacy with other popular OTC medications.

The fact is that oral birth control is OTC in Canada and most of Europe.

I guess AOC didn’t get the memo that she shouldn’t pitch that idea.

Well she did, and in one of the strangest cross-over arcs in politics, Senator Ted Cruz took her up on this.

I agree. Perhaps, in addition to the legislation we are already working on together to ban Members of Congress from becoming lobbyists, we can team up here as well. A simple, clean bill making birth control available over the counter. Interested? https://t.co/7kh3kqxN1w

I honestly hope something comes of this.

Now, I said in the title that AOC got this mostly right.  Here is where she got it wrong.

No, it shouldn’t.  That is the opposite of helping people.  It will drive up costs instead of lowering them and pass the burden onto taxpayers.  The whole point of making it OTC is to get the government out of the birth control game, not get further into it.

This is where I see an AOC/Cruz bill falling apart.

What really shook me what the replies by AOC’s followers.

I have to say, she really represents the crazy of her constituents well.

What?  I’m guessing this darling assumes that it is the GOP who is standing in the way of OTC birth control because they are a bunch of moralizing old white bible thumpers.

Of course, she has to pitch this as a ‘regulating woman’ thing.

She’s not alone in making this into a gender victimhood thing. 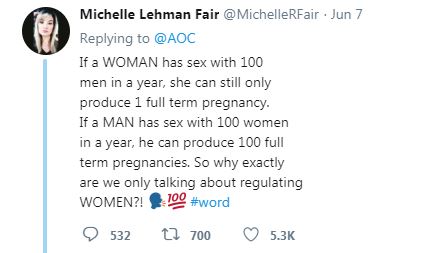 Since the GOP ran with OTC birth control first, who is really about controlling women?  Yeah, the party engaged in Handmaid’s Tale cosplay.

Then there were these women who have no fundamental grasp of economics. 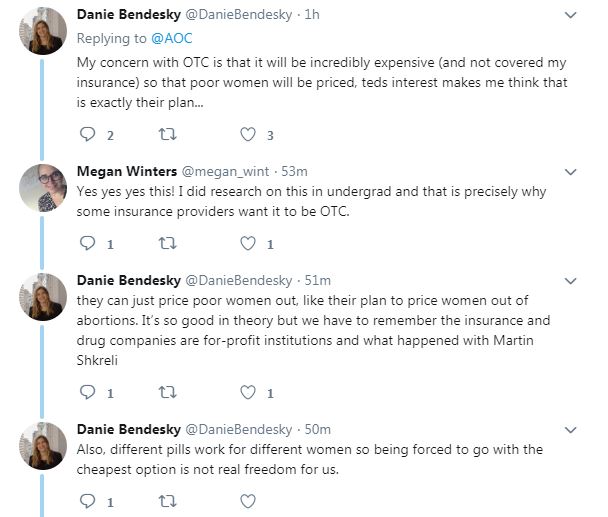 See, when you make a drug OTC and let companies compete on the free market with name brands and generics, the price goes up.  Only with the government pay for, or making insurance companies pay for the drug will the price remain low.

Also, that last Tweet is straight 1984 “Freedom is Slavery.”  A free market isn’t really free because the lowest priced option may not be the best for her.  No wonder these people want socialism so badly, everything they know is wrong.

Perhaps second worst in the groups of replies are the male feminists.

Yeah… make all the stuff for women free because they are not able to be self-sufficient on anything.  Feminine hygiene products are necessary but these people treat them as sacred items too precious to be subject to the market like everything else.  I can only see taxpayer provided women’s hygiene products being the worst idea for women ever.  I don’t know what buying said items in Cuba or the Soviet Union would have been like, but I guess there was one option and it was rough.

This guy is really running for Congress in Washington.  That Tweet thread is an example of how Progressive he really is.  With that much male feminist virtue signaling, I’m pretty sure he is a rapist and is Tweeting shit like this to white knight his way into AOC’s pants.

But I think the worst group of replies came from the “I’m not a doctor but I read a pamphlet once” crowd.

Remember when I wrote a post about John Oliver and him shitting on the medical device industry? CBMTTek made a comment which was accurate.

These people often fall prey to the Nirvana fallacy, i.e., something is terrible if it’s not perfect.

For the overwhelming majority of women, most oral birth control is safe and effective.  Only a small percentage suffer from serious side effects, about 0.3%.

Yes, women should see a doctor or physician assistant before starting birth control for the first time.  But once a woman finds a drug that works well for her, does she really need a new script once a year?  Sure, there are plenty of reasons to get a checkup, again, I’m not arguing that, but birth control shouldn’t be one of them.

For these women, you’d get the impression that AOC was suggesting making Warfarin an OTC recreational drug.  That is will help 99.7% of women is just not worth the risk and we need to keep the terrible status quo.

Just for good measure, I found one thread that was a delightful bouillabaisse of internet doctor and male feminist. 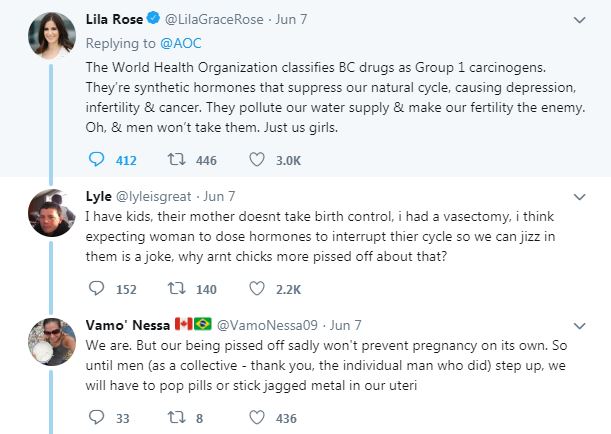 I’m surprised Lyle there only snipped the boys instead of taking them off altogether with that attitude.

First, for Ms. Lila Rose, men don’t take oral birth control because the science of making a male hormonal birth control is very difficult. Sure, there are drugs that can suppress sperm production by reducing testosterone, and that is called chemical castration.  The side effects are terrible.  Stopping ovulation in women is fairly easy, the body does that naturally when women get pregnant.  Just make the body think it’s pregnant with an added hormone and mission accomplished.  It’s not a conspiracy against women unless you believe that a few billion years of evolution is a conspiracy against women (I bet she does).

Second, So what is Lyle or Vamo’ Nessa’s husband supposed to do before they had kids and potentially between kids if they have more than one?

I pretty sure doing and undoing vasectomies as a means of family planning is way worse than taking a pill.  I may be a man and I know that means my opinion doesn’t count, but objectively, it’s still surgery.

I actually want AOC and Cruz to win this one.  It will be funny watching the Democrats fight their media darling on this, with so much planned parenthood money riding on it.

I just can’t wait to see the backlash from her followers who are too stupid and Woke to get just how wrong they are about everything.

10 thoughts on “AOC gets one right (mostly), is backed up by Cruz, and her followers are idiots”