This was just Last December.

What Next? Asheville Moves Forward After Cutting Police Funding

A North Carolina police department will no longer respond to certain 911 calls due to a “staffing crisis.”
The Asheville Police Department (APD) announced Wednesday the department has lost 84 officers since Jan. 1, 2020, and is currently experiencing a “staffing crisis.” In order to “improve response times,” the APD announced they will no longer respond to a slew of crimes, including theft.
…

Police Chief David Zack told News 13 there is no easy solution to the shortage of officers.
“There’s no quick fix. There’s no magic wand. There’s no magic pill that’s going to change this overnight.”
The changes come as the city experiences a rise in crimes. Asheville ranked in the top 10% of most violent cities in the U.S., according to a recent study from 24/7 Wall St., an independent financial news and opinion site.

And here is the list (so far) of crimes that will be ignore. I am sure it will be expanded soon enough. 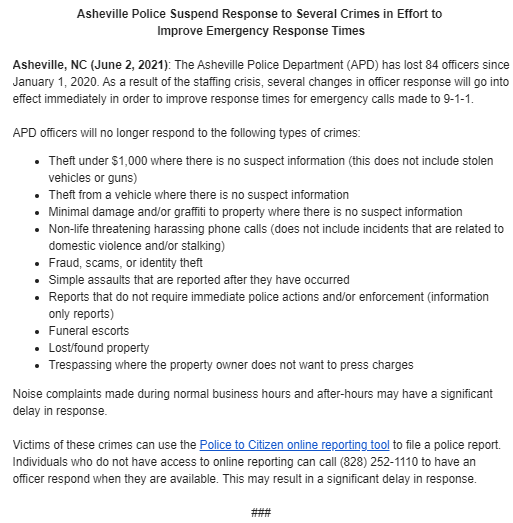 The sad part is this idiocy was aimed to supposedly weed out the bad cops, but probably the opposite is happening: Good cops are getting jobs elsewhere because they are good cops with good records and the bad cops will remain where they are right now because they can’t risk not being hired by other departments because of their crappy records.

The FBI says cities under 100,000 inhabitants have an average of 3.5 officers per 1,000 people. Losing 84 officers means 24,000 citizens in Ashville find themselves with less protection which is not peanuts since the population of the city is almost 100,000. Effectively, the city is 25% less protected because of the woke-induced Blue Exodus and the numbers are showing it.

Hosea 8:7: “For they have sown the wind, and they shall reap the whirlwind.”