First of all, here is the text of the opinion declaring the Assault Weapon Control Act (AWCA) unconstitutional so you can read it yourselves.

Now, let’s begin at the top although I might jump back and forth. 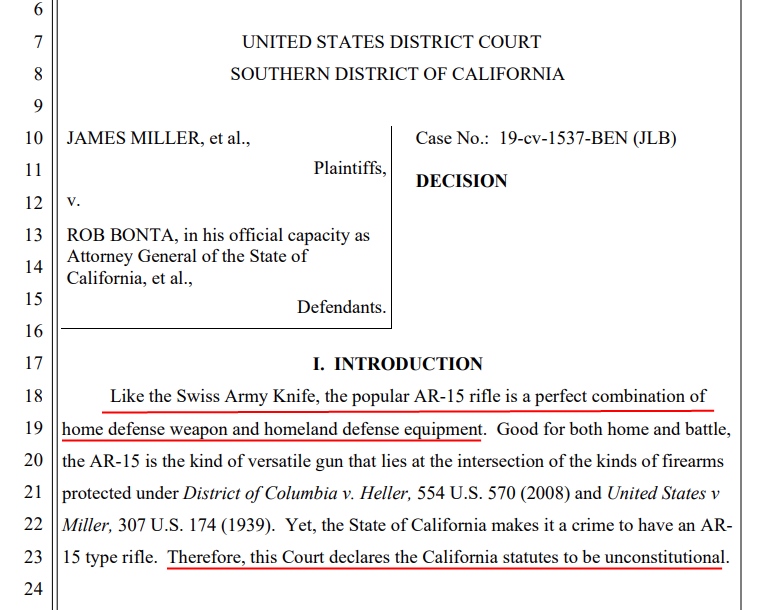 Antis have latched on this first sentence and branded it as madness by the judge. “How dare him compare the poor innocent Swiss Army Knife to the deadly mass killing machine that is the AR 15? He is crazy!”

Well, the answer is evidence. 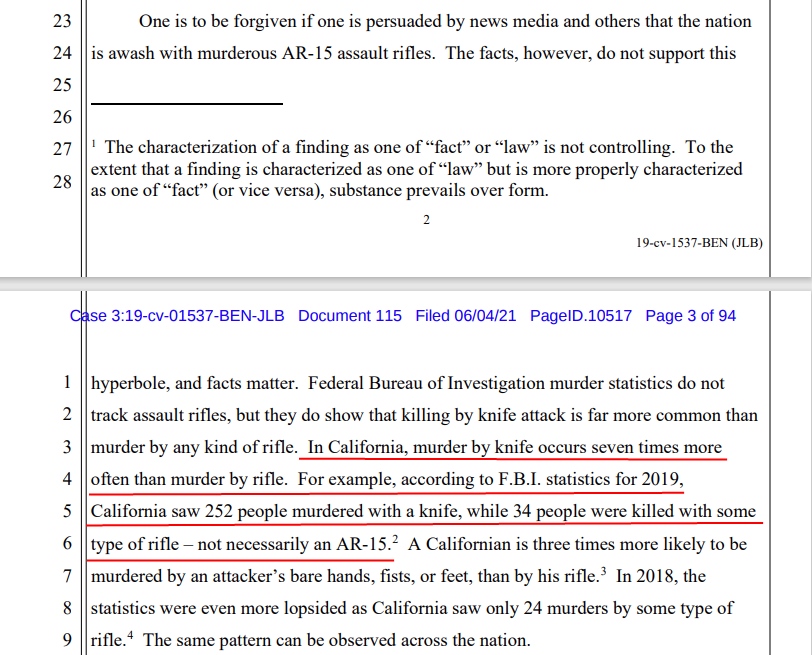 I may have mentioned it before in this blog: Don’t lie to judges as they may take it personally. And that includes thinking you do not need to show evidence or present twisted or suspicious stats to support your point. Judge Benitez through the opinion minces this attempts to obfuscate the truth.

Let me post a couple of passages to show the awesomeness of the opinion:

Judge Benitez puts down in writing an obvious but unpopular truth: Bans do not work.

If you wanted to make a case on the alleged merits of keeping the ban for safety reasons, you’d figure by now, you would have a statistical proof that your bam worked as promised reducing the mass shootings and it did not.  In Florida, statistics are kept about Concealed Weapons Licenses and their suspension when the holders commit crimes and it has proven over and over again that we are indeed a law abiding bunch and nobody has tried successfully to say otherwise. You figure that after 20+ years of enactment AWCA showing the same numbers as prior its enactment is proof positive of its failure to achieve what was promised of it.

As we have been saying for decades: It is not the gun but the cartridge.

But gun controllers have successfully managed to advocate their point because they had not allowed common sense and education be a part of the discussion. How many times have you argued with somebody and explained this point only to be dismissed by the other person saying something along the lines that those technicalities are irrelevant and ignoring the rest of what you have to say?

This next part is a beauty and a warning. 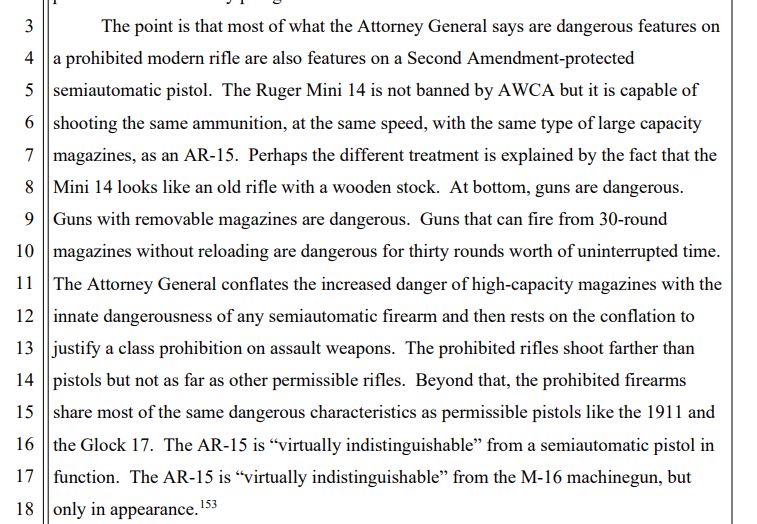 It looks stupid to me or to you or anybody with some functioning neurons that similar functioning firearms could be classified so differently. But what can easily be dismissed as political idiocy by our side, it simply cannot be ignored as they will use it in the future to ban the guns that today they deem safe and acceptable.   Do not forget that Dianne Feinstein’s Assault Weapons Bills, all had provisos to tag the most common handguns owned by Americans into Assault Weapons just because one sample of such handguns can be found to shoot in auto.

US v. Miller has long be decried as a moment in time where the great disservice towards the Second Amendment was cemented. So I find it funny that here is used to remove the ban and strip away the “Only the military” excuse.

The judge mentions in the opinion several instances where the AR 15 has been used in defense of life and limb which contradicts CA Attorney general affirmations that there is no evidence of use as self defense weapon. Judge Benitez goes through the different levels of scrutiny basically telling California that by being so idiotically strict, the only thing they did was to force him to go for the defendant. 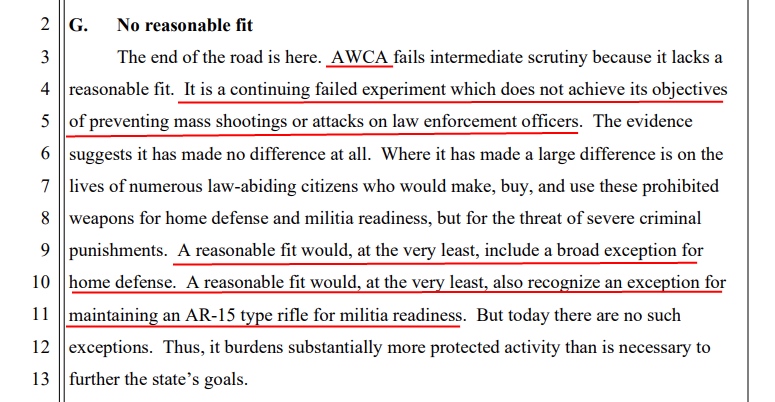 There is much more in the opinion and it is worth to take the time and your favorite beverage to read through it.  No idea how the appeal will go, but they better work real hard to counter it because this is a well-researched opinion chockfull of data and supported conclusions. A reversal for reversal’s sake can come back to haunt the full court.

But then again, it is my uneducated opinion.