Calling in the Gun Control Zombies. 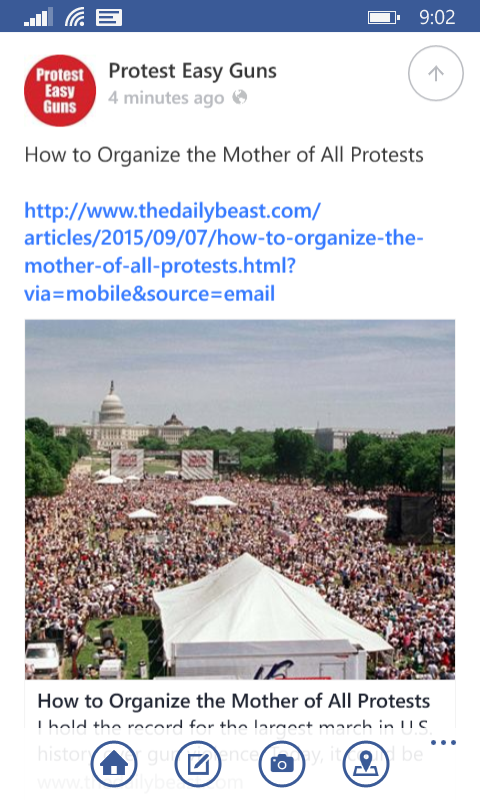 I hold the record for the largest march in U.S. history over gun violence. Today, it could be even bigger.

I know this because every time there’s a mass shooting—as in every other week—women, ready to fill buses to DC, ask me to organize another march.

How to organize the mother of all protests. Donna Dees Thomases.

Those who were too young in the late 90s may not recognize the name, Donna Dees-Thomases is the original Shannon Watts.

Ms. Dees-Thomases also portrayed herself as a stay-at-home mom that was horrified by the Jewish Community Center shooting and she allegedly sacrificed everything to bring about changes in Gun Laws in the country. The difference between Ms.Dees-Thomases and Shannon Watts is that she was a supported not by a private billionaire but by the Clinton Administration.  You see, Ms. Dees-Thomases was not just a mom but a PR executive (Manager of Communications) for CBS news who worked for Dan Rather and before that she was a Capitol Hill staff member for two Democratic Senators: Senator Bennett Johnston (D-LA) and Senator Russell Long (D-LA).

If that was not all, she is/was the sister-in-law of Susan P. Thomases, a member of Hillary Clinton’s inner circle back when her hubby was smoking cigars with Monica Lewinsky. CBS coverage of whatever MMM (Million Moms March) did and say was the equivalent of millions of dollars of free advertising and that is not counting the bad  coverage CBS and the rest of the herd gave to the NRA and gun owners. MMM then went in to score what was then the top daytime TV celebrity, Rosie O’Donnell as a spokesperson for the movement which brought them even more coverage since she was at NBC with her show where she was tagged as “The Queen of Nice” a white version of Oprah one could say.

Unfortunately for MMM, Rosie was famous, but not as loved as Tom Selleck which she went after during an appearance at her show promoting a movie. The ambush did not sit well with the viewers and not only she lost ratings but was dubbed “The Queen of Mean” which she actually ended up acting out on the show. She has never recovered from that.

The second self-inflicted wound came about from an almost buried case that did not make the Six O’Clock news and even today you’d be hard pressed to find about it: Million Mom March activist Barbara Graham using a gun to avenge the death of her son killed in some sort of gang shooting. If that was not bad enough, the wrong guy was shot and ended up paralyzed for life.

But if the Barbara Graham case was not wildly publicized, how come it is known? Because the new battleground known as the Internet was ignored by the opposition and Gun People had an almost exclusive control over the news being spread through it. Many in traditional media back then poo-pooed the web as a serious information management tool, but gun people used it very effectively to share information and to cement a sense of unity behind the cause. They were no longer depending on a few obscure publications, several months behind the timeline to see what our side was doing. Now the information was a click away in a forum or email or newsgroup. This was important because the year 2000 was an electoral year that pitted Vic President Gore versus Governor Bush with the given that Gore would be the successor of the Clinton Kingdom. Gun Owners mobilized and one of the simple things they were doing was “Just talk to one neighbor” as in have a serious conversation with a neighbor not only to have them vote but to vote against Gun Control.

In the end, the formula succeeded. Even though Liberals keep beating the drum of shenanigans in Florida, it was gun owners who threw that election for a loop. I am going to paraphrase a comment I read somewhere now: “Stop complaining about what if Jeb Bush hadn’t been the Governor of Florida we could have won the election. Florida would not have mattered if Al Gore could have carried his own fucking state.” Gore lost Tennessee, his birthplace and that is after both him and his father were Senators for the state for 25 years in total. Even President Clinton admitted that the NRA and gun owners were responsible for the upset when Gore also lost in Arkansas. Donna Dees-Thomases ended up in the political trash heap where Gun Control personnel end when they fail. MMM ended up being a subchapter of the Brady Campaign and mostly a decorative one.

So, a march on Washington to organize a “massive” protest against guns will probably never be repeated under this modern climate. The original one was practically unopposed, had the backing of the Major Media Outlets and the Administration and produced zilch for the profits column. Shannon Watts’ attempt to re-capture static in a bottle have been failing miserably and you could not get a better example as what happened at the NRA Annual Meeting in Nashville where she could only promised 400 determined protesters and barely a hundred showed up, forcing them to use photographic tricks to inflate their Social Media presence and the tricks did not survive but a couple of hours under the watchful eye and cameras of gun owners who went to check them out.

Now, if Gun Control groups want to try for another march, I am all for it. Not only is their First Amendment Right to do so, but it also will put a severe dent in their coffers, and I am all for that too.

6 thoughts on “Calling in the Gun Control Zombies.”