With the SHOTMAXX, it’s worn on your wrist as a watch keeping it off your belt or pockets but still readily accessible. The mic is sensitive enough to pick up airsoft, but I have not tried this feature.

Looks like a great timer and being wrist-worn is a genius idea.  Both sound and accelerometer activated is just pure french vanilla icing on top besides all the other high-tech goodies that are in the small package. The $149 tag is not bad at all compared to other timers.

My only question: How will it stand to water? Sometimes, at the range, it rains. Then again none of the other timers do good in flood conditions.

I will never feel that way again if there is a way available for me to prevent it!

I walk with a greater sense of security knowing that I have within arms reach, enough power to level the playing field with any would-be assailant, no matter how big and powerful.

via Diamonds are NOT a Girls Best Friend, Guns are!! | Blended Family Chaos.

To this day, I cannot understand the mentality of those who would rather not give a loved one a chance to live nor do themselves the responsibility to help them.

The amazing and silly dogma that just because you partake on a suicide pact of defenselessness, everybody else should be forced to do the same is just criminal, as criminal as the cretin that feels he should use my property as income to pay for his tryst with illegal chemicals or just because it feels god to see somebody else bleed.

Derisively called the Pop Tart Bill by the enlightened Media, HB 7029 (Code of Student Conduct) puts a dent on the Zero Tolerance madness that is rampant on schools today.

It does not cover all the stupidity, but kids won’t fear to actually be kids and play cops and robbers with their fingers simulating guns and going pow-pow without the teachers freaking out and calling the SWAT team to school. Wearing a T-Shirt depicting arms or the “violent” quote of the Second Amendment or even telling the teacher that the intent of the Second Amendment is not what it says in some text books without fear of being sent to jail are also protected by the bill.

And, of course no more handcuffs for using food articles as simulated guns.

I predict that this bill will spread to other states upon becoming law.

Moms Demand and Media Matters for America: They suck at math. 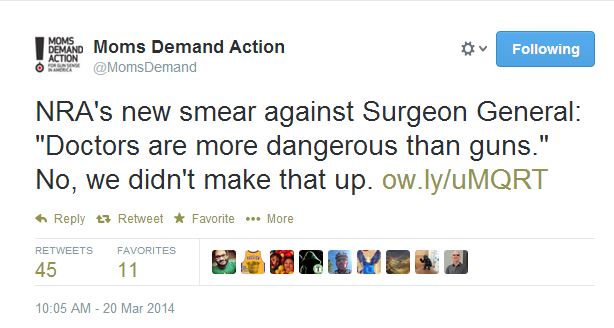 If you have been in the Gun Rights fight for any length of time, you know that Medical malpractice is a serious malady in our country. Shannon und her Band Of Brown Brassieres are losing it via an article by Media Matters regarding malpractice figures given in an episode of NRA News:

NRA News host Cam Edwards furthered the NRA’s attack, claiming that the “Institutes [sic] of Medicine” had issued a study finding that there are as many as 440,000 deaths per year due to preventable medical errors and commenting, “[m]aybe there’s an issue for the Surgeon General to take up instead of your gun ownership and my gun ownership, because it sure that appears doctors are a lot more dangerous than gun owners are in this country.”

In fact, the study Edwards cited was actually authored by a medical error-focused non-profit organization that asserts “we are patients looking after each other in a health care system that could easily kill us.” According to the Institute of Medicine’s “widely accepted” finding, 98,000 people a year die due to hospital errors.

So the number of 440,000 deaths per year is an exaggeration (and I think it is indeed) so the acceptable number 98,000 according to Media Matters and, of course Moms Demand Action.

Now, if we go to the Moms Demand website and check one of their many press releases we find: 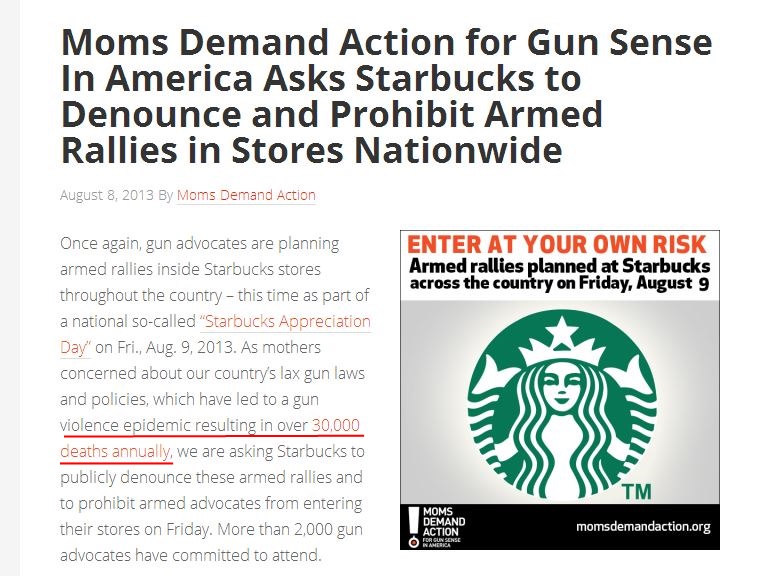 So them evil guns are responsible for 30,000 deaths (They include suicides) and that is bad, but medical malpractice kills 98,000 people and that is good?

They are either really bad at math or really stupid or mentally disturbed individuals.

I vote all of the above.

PS: In case that Media Matters decides to memory Hole the article, here is a screen cap.

“Society does not win when the Government stoops to the same level as the defendants it seeks to prosecute — especially when the Government has acted solely to achieve a conviction for a made-up crime,” Wright wrote. He said the stings have done little to deter crime and instead are “ensnaring chronically unemployed individuals from poverty-ridden areas.”

And What the Flock is the Bureau of ALCOHOL, TOBACCO and FIREARMS doing drug operations for? Isn’t that the real of the DRUG ENFORCEMENT ADMINISTRATION?

So far and reading with Non-Lawyer eyes: Twice in the bill the words “stand his or her ground ” appear.  Three times the wording “place where he or she has a right to be”. So pretty much there is no change to SYG that I can see. I did read a clarification

A person who uses or  threatens to use deadly force in accordance with this subsection does not have a duty to retreat and has the right to stand his or her ground if the person using or threatening to use the deadly force is not engaged in a criminal activity and is in a place where he or she has a right to be.

I think it better defines the law and gets rid of a grey area that a prosecutor may have used to screw with people such as “Well, he was double parked and that is breaking the law” or some stupid crap like that.

Then “using or threatening to use” is mentioned 11 time in several combinations of defensive, deadly and non-deadly  force. I am guessing the legislators are making clear that threatening somebody with the ability/opportunity/jeopardy to do bad things to you in no longer a crime just because you said so and feel like screwing the life of somebody who refused to be a victim.

Also intact appears to be immunity from Criminal or Civil Action by the person, personal representative, or heirs of the person against whom the force was used or threatened.  The whole thing is new so it seems it is more protection for the Citizen.

A law enforcement agency may use standard procedures  for investigating the use or threatened use of force as described in subsection (1), but the agency may not arrest the  person for using or threatening to use force unless it determines that there is probable cause that the force that was used or threatened was unlawful.

This was not prohibited before as far as I recall, but I guess the LEOs and DAs needed it in writing.

The wording “imminent commission of a forcible felony” also remain associated with use or threat of use of Deadly Force:
776.08 Forcible felony.—“Forcible felony” means treason; murder; manslaughter; sexual battery; carjacking; home-invasion robbery; robbery; burglary; arson; kidnapping; aggravated assault; aggravated battery; aggravated stalking; aircraft piracy; unlawful throwing, placing, or discharging of a destructive device or bomb; and any other felony which involves the use or threat of physical force or violence against any individual.

There is more stuff, but you have the link and you can go ahead and examine it. Again I am reading through no-lawyers eyes, but I really don’t see anything bad in the bill….. so we are paging Andrew Branca to tell me where I am wrong 🙂

Assault with a Deadly… Tattoo?

NORRIDGEWOCK — Michael Smith went outside shirtless after being awakened Tuesday morning, yelling at a tree removal company to get off his property.

The workers thought they saw a gun in his waistband and called police.

Smith, who’d gone back to bed, was awakened again minutes later — this time by Maine State Police at his front door, backed up by a group of troopers with assault rifles in his driveway. They were asking him via a megaphone to come out of his house.

Smith did have a gun. It was tattooed on his stomach.

via Norridgewock man with gun tattoo wakes up to armed police | The Morning Sentinel, Waterville, ME.

So it is not the nicest of tattoos, but I have seen worse.  But what caught my attention is that the Tree Cutting crews by law have the right to enter anybody’s property without the courtesy of a simple knock at the door to notify the home owner:

Smith, who works nights, said he was still asleep and was surprised to see a crew of workers from Lucas Tree Experts preparing to saw a number of trees around some power lines on his property…..Rice said that, in general, if a customer is unhappy with the work being done, tree crews are supposed to stop work, leave the area and call CMP. State law says that because such work is necessary to ensure the quality of electric service, the company is not required to give notice to customers.