I cannot emphasize how important this podcast can be. I need you to take about an hour of your undivided time to listen to it. You may want to grab the beverage of your choice, but please make it an uninterrupted hour. If you have to sacrifice range time, do so: this will be a bigger learning experience than any amount of rounds you could put through paper this weekend.

I’ll post again about this case on Monday on lessons learned.

PS: This was supposed to be scheduled for Friday morning, but I clicked on the wrong button. I will post a reminder on Friday anyway.

Seriously, listen to this podcast.

Another Women’s Self-Defense class down the drain

GLENDALE (CBSLA.com) — A Glendale self-defense class geared toward women and girls has been postponed for a second time this month after a national men’s group threatened a discrimination lawsuit because men aren’t allowed to participate in the course.

Harry Crouch, the president of the National Coalition for Men, drafted a letter to the city, demanding it open the class to men.

“There’s no problem with having self-defense classes geared toward women as long as they have the same self-defense classes geared toward men. It’s about the discrimination. It’s not about who beats up who most often or who needs protection the most,” Crouch said via Skype.
National Men’s Group Threatens Discrimination Suit Over Female-Only Self-Defense Class

“For the second time this month” Yup. The Boys of NCFM are at it demonstrating once again that politics trump safety.  As one of their now banned trolls said:

NCFM didn’t say self defense classes including/only for women must be banned, they said that offering a service (in this case, gender specific self defense classes) to only one gender is discriminatory and therefore illegal. Whether this was rectified by adding male only classes or cancelling female classes is irrelevant.

I am really not seeing much difference between these idiots and the Gun Control crowd. The fact that not even 30 days have passed and probably have not given the local authorities time to come up with a bitchslap class for them but went ahead and threat with a lawsuit, shows where their care for the safety of others is located in their anatomy. 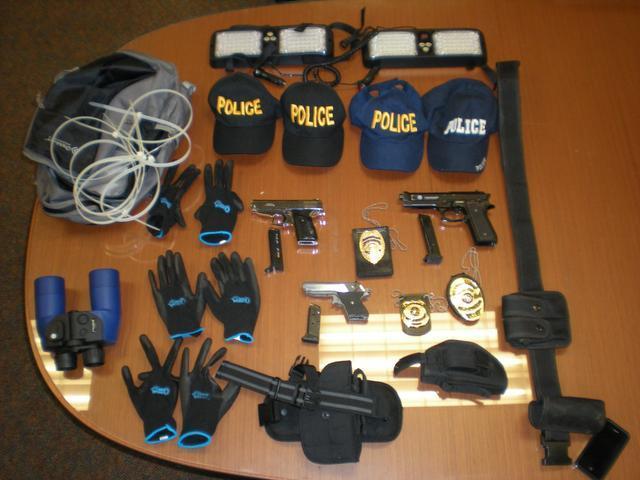 Miami-Dade police working an undercover detail Monday made a startling discovery: They spotted five men inside a silver 2009 Nissan Maxima, pulling on police gear and strapping on weapons.

The real plainclothes cops observed the men place red and blue lights on the car, put on police T-shirts, caps, attach badges with police insignias, and passed flex cuffs to each other, according to a police report…….

I wouldn’t be surprised in the arresting officers gave these idiots an extra dose of re-education  because of the guns. It is bad enough that they were impersonating them, but with a Lorcin?  That is adding insult to injury.

Plus they saved their lives. It is not uncommon to see bad guys pulling the fake cop bit so people are very wary of being pulled over by a car without markings (Which you shouldn’t. You should call 911 immediately and let them know. They should know if you are being followed by real cops) so any clown pulling a Lorcin may end up with several extra holes in his body and a couple of quarts low on blood.

Imagine the following scenario. The end of civilisation has occurred, zombies have taken over the Earth and all access to modern technology has ended. The few survivors suddenly need to know the value of π and, being a mathematician, they turn to you. What do you do?
How Mathematicians Used A Pump-Action Shotgun to Estimate Pi.

So how come I did not get math teachers like that?

Because Gun Owners are a bunch of illiterate rednecks.

Anti Gunners have absolute faith in The Narrative. They won’t deviate or even consider for a second that there might be something wrong with it. It is like the Papal Infallibility taken to the extreme.

Case in point, one Kelly Maldonado. Found her in Twitter as she was engaged in a discussion with Pro Gun activists and apparently she did not like to lose. 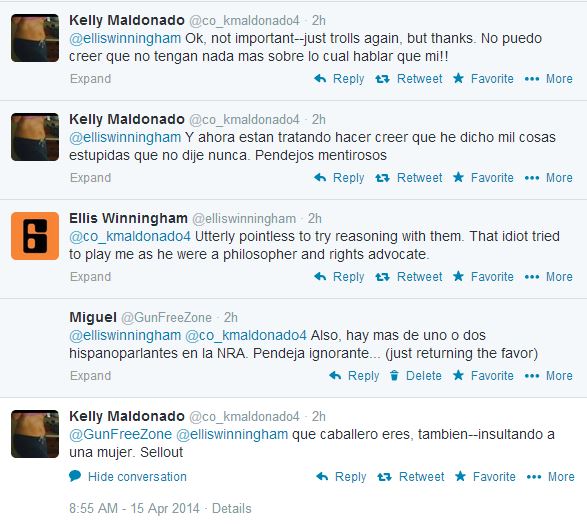 Translation from top to bottom:

Kelly Maldonado “I cannot believe that they have nothing to talk about but me.” (Iffy Spanish grammar on her part, so I am guessing)

Kelly Maldonado “And now they are trying to make people believe that I said a thousand stupid things. Lying assholes” (which she did, maybe not that many)

Miguel: “There are more than one or two Spanish-speakers in the NRA you ignorant asshole.” (returning the favor)

Kelly Maldonado “What a gentleman you are. Insulting a woman. Sellout”

I did responded that she might be a woman but certainly not a lady… that should make her a wee bit more pissed.  And sellout is the preferred term for those minority activist to inflict on those who stray from the reservation/plantation/banana farm of the Liberal & Left Wing parties.

I love their devotion to The Narrative. We are dumb, uncultured, alcoholics, white, perverts, etc. And then, when we don’t fit their prejudiced profile, they lose it and reboot to the same programmed software repeating the cycle.

And just to rub it in:

OSSINEKE – Symphony violinist Eric Lawson has performed all over the world, practicing for decades to master the instrument and classical music by Bach, Vivaldi, Mozart and Haydn. At an Alpena shooting range, the 46-year-old is just as dedicated. At the sound of a buzzer, he recently removed a handgun from a holster under his jacket and shot two rounds into a target in 1.25 seconds.

“That’s a personal best,” said Lawson, who also is allowed by law to carry a concealed handgun.

“Firearms are not something you dabble with. You either become as expert as your time and capabilities allow or you don’t touch them,” he said.

Armed with a doctorate in violin, Lawson doesn’t come across as the type of person with a passion for handguns and self-defense.

“People who choose to arm themselves are really very friendly, mild mannered, even tempered, polite very unlike the stereotypes people think of,” said Lawson, who also is an Alpena County commissioner.

Why I believe we are ready for secession from DC. 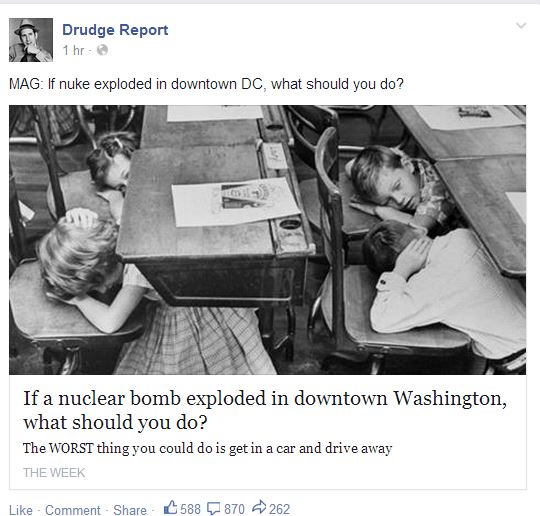 A big (and I mean big) percentage of the comments run the gamut from “Good riddance” to discussing the menu and beverage of choice to watch the event.

Lots of people are just sick of the Feds.