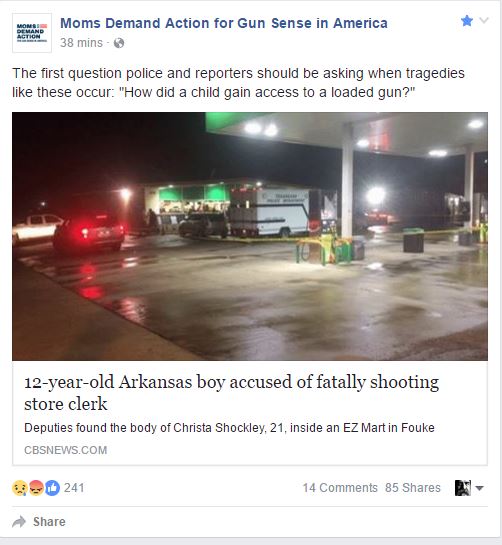 The first question police and reporters should be asking when tragedies like these occur: “How did a child gain access to a loaded gun?”

Let’s begin with being a bit more candid about this case. Is Shannon hinting this was another deplorable accident where a 12-year-old found a gun and accidentally shot a woman? Probably yes because the truth creates a bunch of questions that she does not want answered: 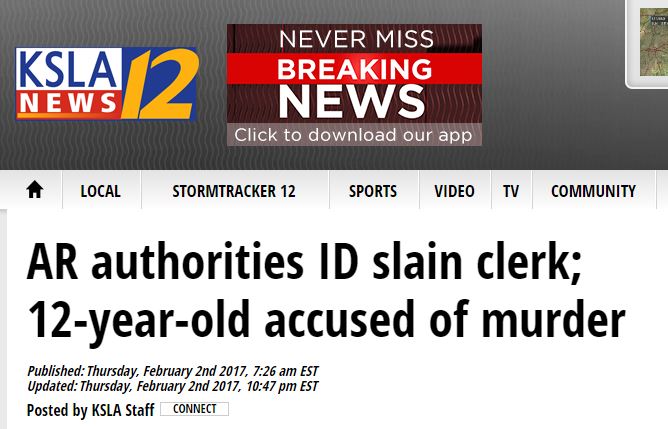 FOUKE, AR (KSLA) -A 12-year-old student is accused of slaying a clerk and robbing a convenience store in Fouke, Ark. A newspaper carrier found 21-year-old Christa Shockley unresponsive on the floor of EZ Mart on south U.S. Highway 71 just after 2 a.m. Feb. 2, the Miller County, Ark., sheriff’s office reports. Authorities briefed Fouke School District officials about their investigation about 7 a.m. “At that time, no suspects had been identified,” sheriff’s Chief Deputy Michael McQuerrey said. “However it appeared the victim had been specifically targeted.”

Why did he murder the clerk? How did he get to the store at that late hour? How did he get back to wherever he left the gun and clothes? What kind of family life does he have that murdering a woman is something he considered and executed so calmly, he actually went to school the following morning?

But since the answer to these questions are not only hard but would make Shannon and her Mommies uncomfortable, the easy answer is to blame the NRA and Gun Owners.

Because hypocrisy suits her well. 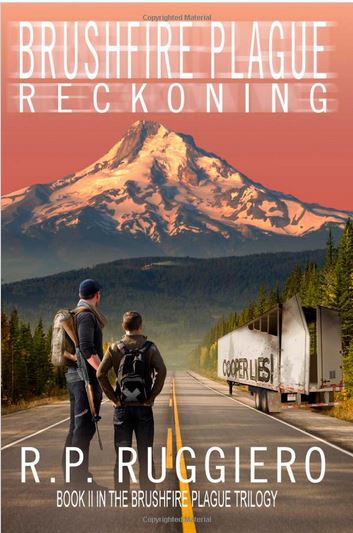 The second book of the trilogy and I was not disappointed. I liked first Brushfire Plague book because it was not the usual super-macho-prepper-takes-on-the-world but a regular guy who was subject to a sudden steep learning curve on what to do when the world decides to go Tango Uniform and as he learns, we (hopefully) learn. Reckoning is fast-paced and leaves you wanting for more. I read it in a 7-hour stretch with the occasional break for those things that shall not be mentioned…and food intake too.

Reckoning keeps on that line but also adds two very important things: Actions have consequences and you better learn how to deal and live with them and that when people are under extreme pressure and emotions, they will either do the most gallant of things of behave in the most callous of manners. This is Cooper Adams’ learning curve in this book and a cautionary tell for the reader: Your true friends will be few in numbers, allies will turn on you and perceived enemies once in a while will surprise you with a small dash of kindness that will probably will not be repeated.

How much “old” morality can we afford when the World has lost its own? Is there a balance between doing the right thing versus doing what is necessary to survive, specially when there is no balance out there? Are you willing to pay the price that comes with either position.

That in my opinion is the fundamental premise in Brushfire Fire: Reckoning.

And repainting the Blog.

I went with a new theme for the blog. I think it looks cleaner and better, but according to my wife I have the taste of a Hun.

Apart from politics, dispassionate observers must question the simplistic liberal slogan that more guns equals more crime. The U.S. has seen a two-decade period during which private gun ownership has continued to soar (some 300 million firearms are now in civilian hands), while crime has diminished.

I have not been paying attention to the media too much this week, but I have not seen a paroxysm of faux remembrance/political activism associated with Sandy Hook.  We might see some tomorrow, but being the weekend and with 10 shopping days before Christmas, the political Dancing On Blood Marathon doubtfully will have much pull.

This has been a terrible and wasted year for Gun Control. Not that we have not suffered losses, but what the Opposition had intended in January and what they have “achieved” by December shows that no matter how much money and media they can throw at the issue, their ledger shows an awful amount of red.

They will not stop doing their thing, but we know we can stop their initiatives and even keep scoring for our side.

Shannon Watts finally comes out of the closet.

At least partially. From a New York Times article describing the manipulations of the eeeevil NRA.

She is no longer the “Stay-At-Home-Mom” baking cookies and waiting for the husband at the door with a fresh martini. 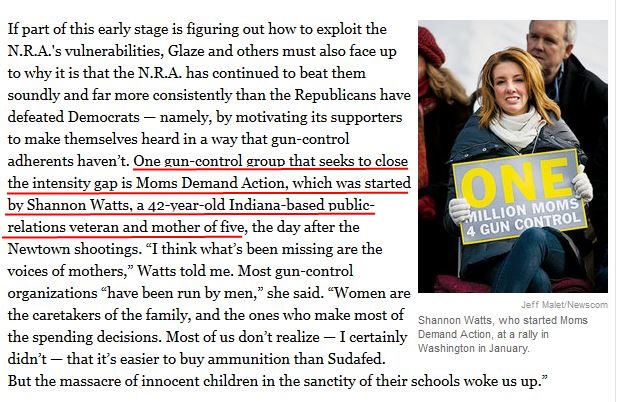 Now we wait till she makes public that she was/is a Democratic Party Operative and worked for them evil corporations that every Lib hates…..OK, I’ll get a sofa.

Moms Demand Action and the American Academy of Pediatrics. 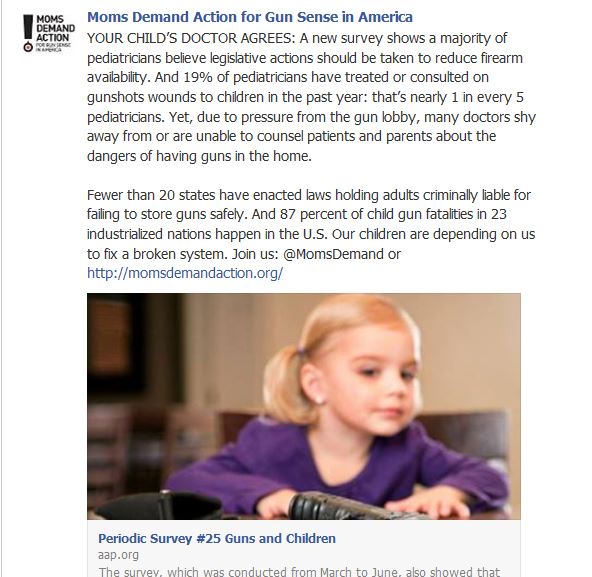 This is a survey of 1,060 U.S. pediatricians conducted by AAP (which I figure are associated with AAP but it does not say.) AAP has a long history of being rabidly Anti Gun and the reason laws have been implemented to stop medical practitioners from asking questions about home firearms ownership. Tales of AAP doctors interrogating small children about guns at home without the presence of their parents are well-known.

The AAP continues to support a number of specific measures to reduce the destructive effects of guns in the lives of children and adolescents through the implementation of the following recommendations.
•Enact a strong, effective assault weapon ban;
•Eliminate the gun show loophole and require mandatory background checks and
waiting periods before all firearm purchases;
•Ban on high-capacity magazines;
•Enact strong handgun regulations; and
•Require safe firearm storage under federal law. 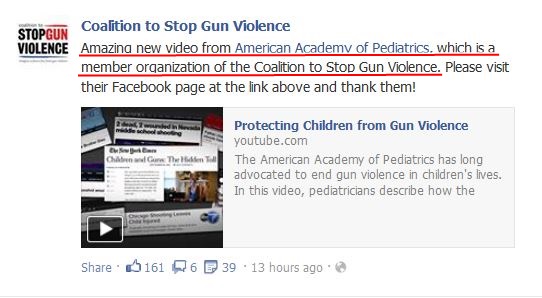 So maybe AAP is where Michael Bloomberg got his idea for Mayors Against Illegal Guns: Innocent sounding name hiding the true intentions. If you have kids and a pediatrician, you may want to check if he is a member of AAP and ask him/her if he/she is aware of its politics. Your doctor might be surprised.