Cruising DefensiveCarry.com (A great forum for those in the Concealed Weapons Permit Lifestyle) I found the following tidbit of information:

Oklahoma police investigating the shooting deaths of two girls have told area residents with guns to bring them in for a test to determine whether they were used in the attack, sparking concern among those who own guns for hunting and self-defense.

According to reports in the Tulsa World the Oklahoma State Bureau of Investigation sent letters to members of the community who were registered as owning .40-caliber handguns suggesting they voluntarily bring in their gun or guns for a test.

That story in itself is disturbing as hell. Oklahoma does not have gun registration so how the hell OSBI managed to get a list of gun owners? Those enlighhtened in the gun business report that about the only way to get any kind of list would be for the OSBI to call ATF and get a hold of the “Yellow Sheets” or as we know the Firearms Transaction Record or Form 4473. Some are questioning the legality of using Tax Forms without proper judicial request since none of the reports so far indicate that legal measure.

The story in Fox News reveals that OSBI knows that a .40 caliber Glock was used as the murder weapon but the clincher is that from the list of 60 OK gun owners, 40 of them voluntarily turned their weapons in for testing. The precedent of such absurdity is astounding. A Law Enforcement Agency goes into a suspicious fishing trip looking for clues in a murder case that has stalled and you will relinquish your rights so easily? And to top it all off, here is a quote from the first article:

Brown said those weapons were taken by investigators and test-fired, and the results of those tests now are being evaluated. She said nearly half a dozen former gun owners contacted authorities to identify new owners

So just to be in the safe side, I will not only trample my own Second and Fifth Amendment Rights but I will do so unto others. This is just plain sad and worrisome. You’d expect this from New York, Chicago, Miami or Los Angeles but not from Oklahoma.

I do feel ashamed and sorry for the Sooner State.

Working on a Gun Free Zone

I recently had coffee with a young lady of my acquaintance and she was upset. It seems that she works at a gun free zone workplace and, worried about her safety asked the Security Officer what was he supposed to do in case of a Bad Guy or Nutjob attacking the place. The answer given by the Security Officer was “I’ll call 911 and be a good witness.”

At first she thought he was joking but his face told her otherwise. He went on to explain that all he was required and ordered by the corporation to do was to call police and be a good witness. He went on to say that he was an unarmed Security Officer and that the corporation forbids associates to have any type of weapon on property and that includes Security Officers so defending oneself or anybody else against a Bad Guy is out of the question. Also, weapons are not allowed in personal vehicles so even if an associate might happen to be in the parking lot and hears the attack, he/she would be summarily fired for having a gun even if the life of the CEO was spared by his/her actions according to corporate policy.

About the only advice the Security Officer could give her was to run as far away and as fast as possible from the location or, if she could not to find a corner, bend over , put her head between her legs and….

You know the rest.

We are the New Negroes. 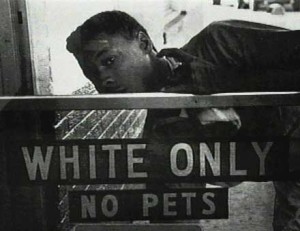 Yes, the title is there to induce shock. If you are not aware, there is a segment of the population that is being discriminated because they chose to take responsibility for their self-defense. The people being discriminated are law abiding citizens who are vetted by State and Federal governments to carry a concealed weapon and yet, they are not allowed to access places that even felons can go into because they carry a weapon for their self-defense.

If you do not carry a concealed weapon, allow me to explain the feeling. Once we made the decision to carry, we must apply for a permit. This usually involves taking a class with a certified instructor and pass an exam, have your picture and fingerprints taken, fill paperwork and send everything to the government so they can verify you are not a Bad Guy. Once the government is satisfied and your information entered in a database, you receive a small ID card which says you are not a nutjob or a felon and can carry a concealed weapon.

Now you think your troubles are over, not so. You see, there is this erroneous conviction perpetuated by those who hate the idea of guns in the hands of civilians that we are an unsafe bunch. In their eyes we are a pack of bloodthirsty animals itching for a fight so can notch our guns with a body count. To calm their fears, politicians banned certain places from anybody who carried a concealed weapon: Schools, Bars, Restaurants, public parks, etc. and in some states, they allowed owners to ban the access to their business as we were some kind of lepers that should be kept outside so we would not infect other people. These places became known as Gun Free Zones.

The concept behind the Gun Free Zones, according to the Anti Gunners was to provide a safe haven from those NRA wackos that carry guns everywhere. They sold the idea hard and long guaranteeing that people would be safe from attacks because the law said so. Instead they created a perfect slaughterhouse for the real crazies that roam our streets and the criminals that like nothing else than a good group of unarmed victims. 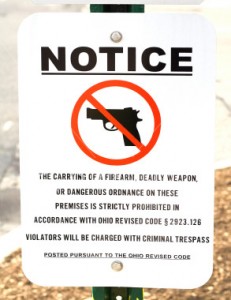 So when I see a sign like the one above I am insulted. Why am I being treated like a second class citizen? I have demonstrated my desire of independence by not relying on the government for my safety. I have jumped through the legal hoops to demonstrate I am a Good Guy. I spent money on a quality weapon and gear to protect myself and my loved ones. and yet, I am treated like a pariah because some idiots fail to see the difference between reality and their own impotent fears and in the process they put innocent people at risk by allowing the true sick and the criminals a target rich environment for their misdeeds and mayhem..

Gun Free Zones are nothing more than a modern-day Jim Crow. This has to stop. Now.