Dear Mr. Maiello, the problem is Guns are cool. 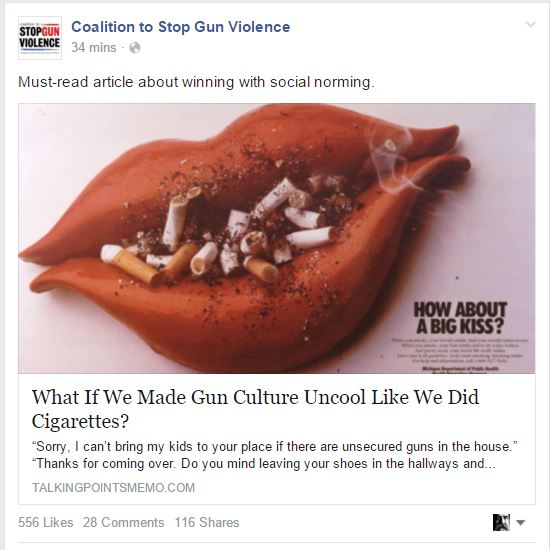 It’s surprisingly easy to imagine a society where gun ownership is looked down upon, if not scorned outright. This already happened with smoking, at least partly as a result of a public education campaign aimed at young people, and it happened when polite society finally came down against people flying the Confederate flag after the Charleston church shootings this year. Sometimes, when legislative action is difficult or downright impossible, a cultural approach works to curtail dangerous behaviors.In short, we can make gun ownership uncool

Source: What If We Made Gun Culture Uncool Like We Did Cigarettes?

Let’s begin with the obvious: The campaign to make gun ownership look not only uncool but retrograde has been going on for the past 30 years. Your side has almost unlimited access to major media outlets and Hollywood production companies that allow you to cast gun owners as dangerous, nasty, racist uncool,despicable….you get the idea.

Yet, after those many years, your side has failed miserably to achieve the goal of exorcise us from the American Culture. Why is that?

Because guns are fun. Gun owners are fun people. We have a ball when we get together to shoot our guns and even more when we bring new people into the culture.

You see? The Gun Control sub-culture is sad and angry. You offer nothing other than loud complaining and name calling and after a while, it gets tiresome and irritates the hell of the regular Joes and Janes. You take somebody to protest guns for the first time and they go home at the end of the day tired and feeling angry. That may work once or twice, but save some emotional masochist, regular folks decide that they had enough soon and seek more pleasurable alternatives.

When we take somebody shooting for the first time, they feel like they are being initiated in a strange and curious world that they only have some nasty reference (from you) about. But after we teaching them the fundamentals of shooting, rules of safety and how to act, they see it is nothing more than developing another skill like driving or rock climbing or wood carving. But the real magic is when they are finally facing the target downrange, they bring the gun up, probably with some trepidation and almost fear, press the trigger and hit that target.

And they smile because it is darn fun.

And it is right there when our side wins. Even if that person never shoots a gun again, whatever crap is that your side has been pushing against us gets identified as lies. And nobody likes or trust a liar.

And if you do not believe me? Check the face of one of the biggest advocates of Gun Control in this country in this picture:

That would not happen to be a smile in the face of Senator Chuck Schummer, would it?

19 thoughts on “Dear Mr. Maiello, the problem is Guns are cool.”