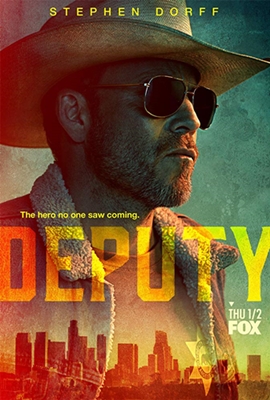 Having watched the preview, I was excited to see this show because January usually has low-grade shows to fill the holes left by the main Fall shows. Damn, I was disappointed.

They went woke even before the starting credits were done with a heavy dose of “ICE is a bad federal thing” and our “hero” being chastised for sabotaging a raid.  We get the obligatory L.A. chase scene that ends with a winch trap and the suspension of the laws of physics only to have our hero become the Sheriff of LA County by one of those quirky unattended legal things from a century and a half ago.

And then hit every cheesy police show cliché they could fit in one hour. From the son of a dead partner becoming a deputy (includes inspirational speech to the new graduates), to having doubts about the job but strong sexy wife gives him a kick in the pants. To end the cliche fest with a cherry on top, he is issued a driver/bodyguard on full  “lesbian in business attire” look. Of course she is not just the LGBQT driver, but his Woke Jiminy Cricket who is 1000% more accomplished in life than the White Patriarch she has to drive, plus shoots better than John Wick and gives the proper advice on cue.

Save yourselves and watch something more edifying like The Real Wives of Some Posh City.