Entitled Foreigner Is Unhappy He Can’t Enter the U.S. Illegally

When I was a kid the term for somebody that crossed the border illegally was “illegal alien”. According to the Oxford English Dictionary “alien” means “a foreigner, especially one who is not a naturalized citizen of the country where they are living.
” And “Illegal” just means that they are not hear with the permission of the government.

The narrative went into action “people aren’t illegal”. “Nobody is illegal”. Everything was about making a well defined term with well defined and understood meaning to become unacceptable.

So today if you say “I don’t want illegal aliens to invade our country” you will be meet with ridicule and scorn. “Why are you against extraterrestrials?” “Are you afraid some alien is going to probe you?”

All of this is designed to confuse communications.

“Undocumented worker” is designed to make you think that all illegal aliens are actually working here in the U.S. Or at least looking for work. While it is true that it is difficult to find American citizens that are willing to work for the wages that illegals will, this is not a reason to allow illegals into the country.

Today being against the swarm of people crossing the southern border is being “racist” or against “migrants”. This is not the case at all.

In 2020 President Trump used a law designed to protect the country in times of pandemics from being flooded with sick people. Title 42. This allowed him to send those that were captured back to Mexico. It allowed him to stop the people claiming asylum from making that claim.

Remember, that if you are escaping a bad place, you should be claiming asylum in the first country you escape too. Yes, there are exceptions for the scenarios where you are escaping a bad place (U.S.S.R.) and have to pass through other bad places (East Germany) before you get to a safe place. (West Germany). This is not the case of those that were able to safely walk north through multiple countries before claiming asylum in the United States.

Nobody on the left would claim it was ok for us to move those illegal aliens to Canada and have them seek asylum there.

Unfortunately we are being invaded through our southern border. The state of Arizona is being sued because the started stacking containers near the southern border which was acting like a real fence. There is more money being funneled to Ukraine and the IRS than there is to border protections.

Because of this we end up with entitled bullshit like the following.

When Vladimir Castellanos learned that COVID-19 restrictions blocking him and other migrants from claiming asylum at the U.S. border with Mexico may not be terminated this week, he said he felt deceived.

Castellanos and his brother are Venezuelans, and they were among dozens of migrants gathered on both sides of the Rio Grande on Monday night in Ciudad Juarez, Mexico, and El Paso, Texas, with some lighting small fires to keep warm as temperatures dropped toward freezing.

They had traveled there in anticipation that the COVID-19 restrictions, known as Title 42, would be lifted on Wednesday as ordered by a U.S. court. Title 42 allows U.S. authorities to rapidly expel migrants to Mexico and other countries without a chance to seek U.S. asylum.

But in a last-minute move, the U.S. Supreme Court on Monday allowed Title 42 to remain in place temporarily while a legal challenge by Republican state attorneys general seeking to extend the measures is decided.

He expected to travel to the southern border, cross it illegally. Then turn himself in and ask for asylum. The problem is that he and the millions of other illegal aliens like him don’t actually qualify for asylum. Being a citizen of a poor country, a third world shit hole, does NOT make you qualified for asylum.

There are particular rules.

And if you are going to become a productive member of the US society, which is in doubt, why didn’t you do that in your own country. 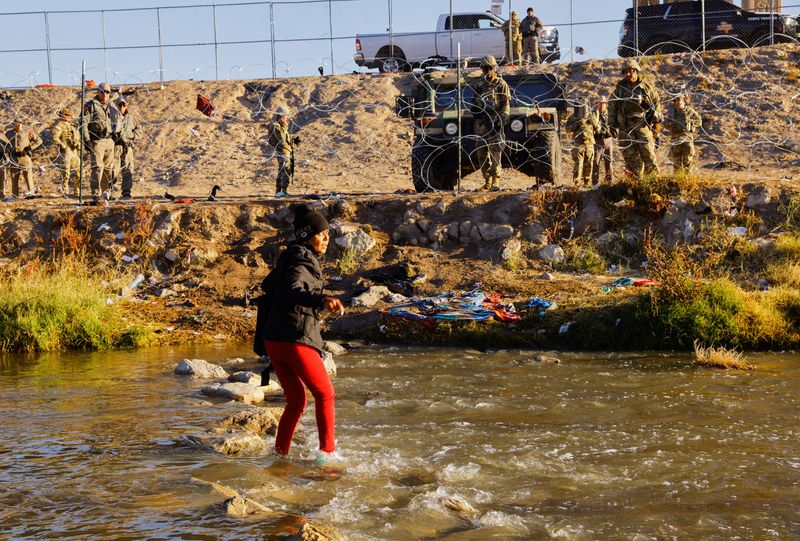 Frustration among migrants at U.S.-Mexico border as COVID restrictions remain
CIUDAD JUAREZ, Mexico/WASHINGTON (Reuters) -When Vladimir Castellanos learned that COVID-19 restrictions blocking him and other migrants from claiming asylum at the U.S. border with Mexico may not be terminated this week, he said he felt deceived. Castellanos and his brother are Venezuelans, and th…

3 thoughts on “Entitled Foreigner Is Unhappy He Can’t Enter the U.S. Illegally”