Florida State of Emergency and prohibition of gun & ammo sales.

Via The Gun Writer. 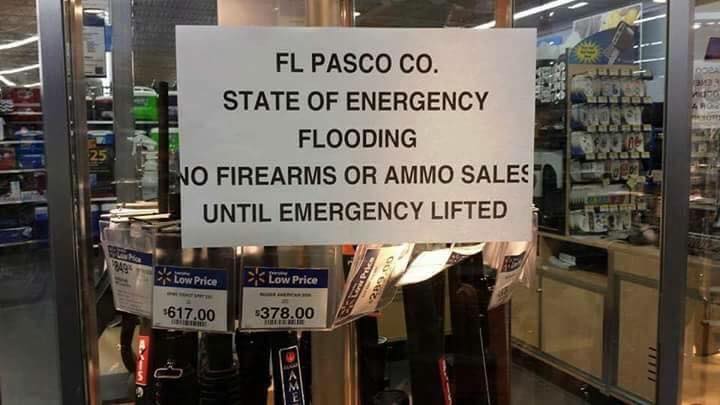 One that needs to be checked out. I thought we were done with the automatic banning during emergencies after Katrina so maybe what we are seeing is an overly generous application of the one statute still remaining in the books:

AFFRAYS; RIOTS; ROUTS; UNLAWFUL ASSEMBLIES
870.043 Declaration of emergency.—Whenever the sheriff or designated city official determines that there has been an act of violence or a flagrant and substantial defiance of, or resistance to, a lawful exercise of public authority and that, on account thereof, there is reason to believe that there exists a clear and present danger of a riot or other general public disorder, widespread disobedience of the law, and substantial injury to persons or to property, all of which constitute an imminent threat to public peace or order and to the general welfare of the jurisdiction affected or a part or parts thereof, he or she may declare that a state of emergency exists within that jurisdiction or any part or parts thereof.
History.—s. 3, ch. 70-990; s. 1400, ch. 97-102.

And that leads to:

Then again it is Pasco County which with Hillsborough County (Tampa) they act more like part of Southern California than South Florida. Maybe somebody told off at a Deputy and he freaked out forcing to call a riot situation.

5 thoughts on “Florida State of Emergency and prohibition of gun & ammo sales.”